Chicago Fire central defender Arne Friedrich has announced that he's ending his career. The 34-year-old had struggled with recurring back problems. Best known from his years in Berlin, Friedrich bagged 82 Germany caps. 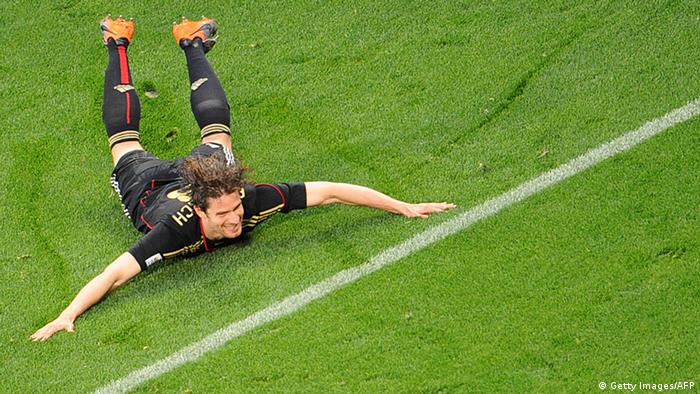 German international defender Arne Friedrich said on Sunday that he would give up his battle with back injuries and retire from football.

"After a long period of reflection, a lot of time in rehab and in discussions with my doctors and therapists, I have decided to end my career as a professional footballer," Friedrich said on his official website on Sunday. "I can look back with great satisfaction on a wonderful career and am now excited to open a new door."

Friedrich agreed with his Major League Soccer club the Chicago Fire to mutually terminate his contract, which would have run to the end of the calendar year.

"In the past few weeks and months my back has been causing me more and more problems. After two slipped discs my body is no longer in a position to stand up to the challenges of being a pro athlete," Friedrich said.

The long-serving Bundesliga and Germany defender left for Chicago last summer from Wolfsburg, and said on Sunday that he had made many friends and "found a kind of second home" in the Windy City.

Best known in the capital

The longest and most successful chapter of Friedrich's career was with Hertha Berlin. After helping his first pro club Arminia Bielefeld to promotion to the top flight Bundesliga, Friedrich moved on to the capital. He played 231 games for Berlin and established himself as a German international defender in the process. The defender was part of Hertha's rollercoaster ride from fourth in the table in 2009 to relegation the following summer in 2010 - at which point he moved on to his last Bundesliga station with Wolfsburg.

Friedrich played in both the 2006 and 2010 World Cups under coaches Jürgen Klinsmann and Joachim Löw, donning the German jersey on 82 occasions. He started out on the right side of defense but ultimately won the central defender's spot he preferred at international level.

In the 2010 competition in South Africa, shortly before the end of Friedrich's international career, he finally scored his first and only goal for his Germany - getting in on the rout with the third goal in Germany's 4-0 quarterfinal win over Argentina.

Friedrich concluded his announcement by saying that while it was time to usher in a new era in his life, he would first concentrate all his efforts on recovering from his injuries.