As e-commerce has gained traction amid the COVID-19 crisis, investors are building what could be Europe's biggest logistics platform in France. But becoming No. 1 might not be that easy. 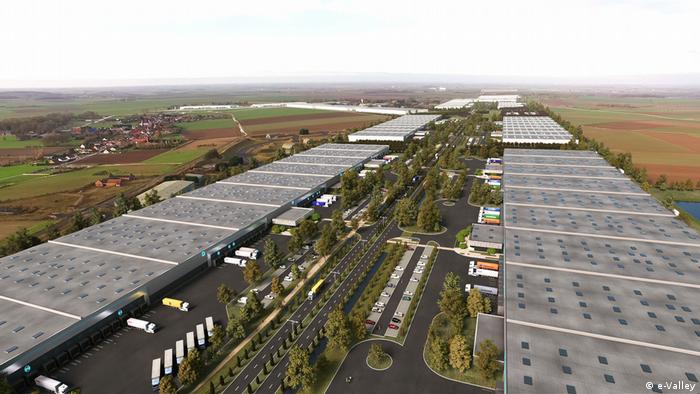 The Cambrai-Epinoy air base in northern France has an international history. German soldiers were based there during the two world wars. After the Liberation by Western Allied Forces in 1944, the UK's Royal Air Force used it as a military base. Later on, NATO planes would take off from there — until 1966, when France's President General de Gaulle took the country out of the military alliance. Paris later kept some nuclear bombers there. The military base was closed in 2013.

Now, it's set to again take an international turn — and become Europe's biggest logistics platform, called e-Valley. Even though not everybody believes that'll be that straightforward.

COVID-19 has made the case for e-commerce

BT Immo Group, a Paris-based investment group, is spending hundreds of millions of euros to construct 550,000 square meters of warehouse space at the area, which is as large as 320 hectares, i.e. about 320 soccer fields. Roughly 250 construction workers are currently building the first of eight huge warehouses and will complete it by the end of this year. E-Valley Development Director Fabrice Galloo thinks the COVID-19 crisis has made the case for such a project even more.

"E-commerce has been skyrocketing during the COVID-19 crisis", he told DW, as he was taking a team of reporters on a tour around the construction site. "Many companies have realized through the COVID-19 crisis that having warehouses in Europe is becoming more and more necessary, as countries are trying to relocate parts of the supply chain.A lot of brands from outside the EU, from the UK because of Brexit, China, and North America have been contacting us."

A recent study commissioned by Swedish e-commerce auditor Detail Online and carried out by market research institute Kantar confirms such a trend toward more online shopping since the start of the pandemic. According to the survey, the share of people making more than half of their purchases online has increased by 25% to 80% in Europe's main e-commerce markets, i.e. the UK, Germany, and France.

E-Valley's developers are convinced the project has what it takes to capitalize on that trend, not only because of its size.

The area is next to several highways and train lines and near various airports and harbors. The upcoming 107-kilometer Seine-Nord Europe Canal will connect it to the Benelux countries' river network.

What's more, the platform will be a smart logistics city, explained Galloo: "We will set up startup incubators and be working with artificial intelligence and big data. Everything will be mechanized. We'll be using robots, exoskeletons and drones in and around the warehouses. Our campus will include restaurants, creches, hotels and training centres."

He added that the site would have a cybersecurity department cooperating with the French gendarmerie.

"E-Valley will also be a duty-free zone, which means companies will only have to pay import taxes once the goods leave our compound. That obviously provides cash flow benefits," he said. 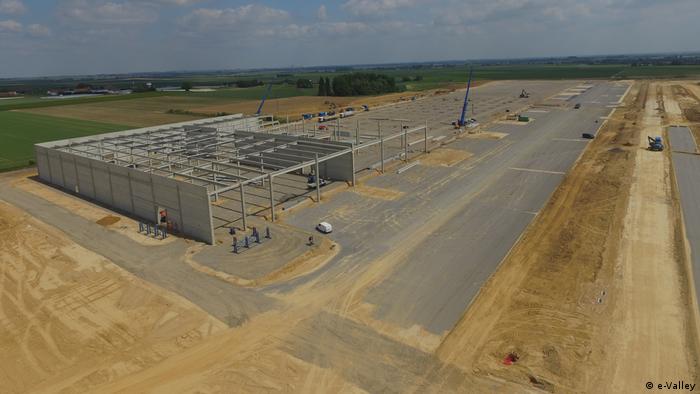 A quarter of the available warehouse space is already signed up for. US-based fashion label Haddad Brands will be leasing the first warehouse currently under construction. Logistics group Bils-Deroo, based in the northern French town of Sin-le-Noble, will occupy 12,000 square meters in warehouse No. 2 which will be finished at one point next year. Bils-Deroo Director General Franck Blot says e-Valley gives the group the opportunity to increase its share of e-commerce.

"Our clients have multiplied the share of turnover in e-commerce by up to eight during the COVID-19 crisis and it's really important for us to now  start working with pure players, i.e. companies that solely sell their products online," he told DW. Bils-Deroo aims to increase its own share of turnover in e-commerce from 3% this year to 15% in 2024.

But Michel Ruimy, professor for economics at Paris-based Science Po University, doubts it will be all that easy for e-Valley to become Europe's biggest logistics platform. As the COVID-19 crisis has also increased competition. "This new wave to set up logistics warehouses is creating a new market for real estate," he told DW. "Many regions will be competing to attract companies and therefore lower their local taxes."

"What's more, e-Valley's business model is relying on the Seine-Nord Europe Canal. But the latter will only be completed in late 2028, five years later than scheduled," he added.

Canal only 'cherry on the cake'

Development Director Galloo is nevertheless convinced e-Valley will outpace its competitors. "We obviously understand that a lot of different regions will try to attract companies," he said. "But it'll be very difficult for these regions to compete with our huge area. Plus, we are constructing a campus, which will provide all sorts of services. And our business model works, even without the Seine Nord Europe Canal — the canal is only the cherry on the cake."

And e-Valley could be only the beginning. Its developers are planning to buy a second military base in France and build more smart logistics hubs abroad.

Many businesses in Africa have discovered new ways to bring goods and services to their clients during the COVID-19 lockdown. Both big and small entrepreneurs stand to benefit from online trade after the pandemic. (09.06.2020)

It's easy to shop with just a click of the mouse. But can it be people- and climate-friendly too? Architecture students think so, and they're sharing their ideas at the German Architecture Museum in Frankfurt. (23.06.2020)

Globalized supply chains have accelerated growth over the past decades but are proving fragile in the current pandemic. As companies assess the new risks emerging from globalization, safe supply is moving center stage. (26.05.2020)