The foreign ministers of Russia, Ukraine, Germany and France have reiterated their call for a shaky ceasefire to be respected in Ukraine. The quartet met in Paris with the aim of rescuing the Minsk agreement. 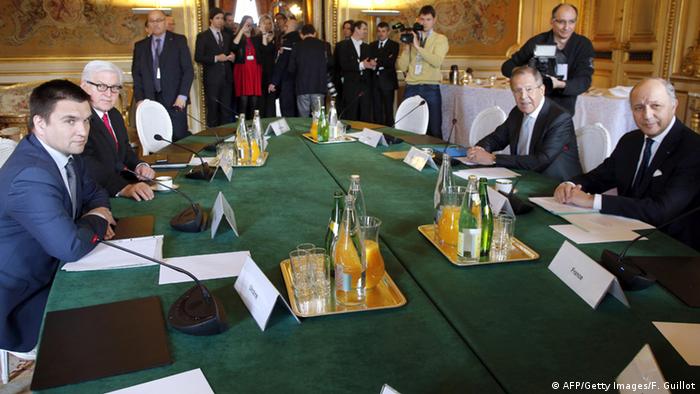 "We call for the strict implementation of all provisions of the Minsk agreements starting from a comprehensive ceasefire and withdrawal of heavy weapons," the ministers said in a joint statement read out by Fabius.

"Highly fragile" was how Steinmeier described the current situation on the ground in the east of the country, where pro-Russia separatists have been battling the Ukrainian army and other forces loyal to Kyiv since April, with more than 5,600 people killed in the fighting. Steinmeier said while there had been a reduction in violence in the past few days, "There continue to be numerous violations of the ceasefire."

While noting some progress had been made in agreements to withdraw heavy weapons from key conflict zones, Steinmeier said the withdrawals should physically take place. He said there was no trust between the two sides.

Early on Tuesday, the separatists reported they had begun pulling back some of their heavy weapons, something that was disputed by Kyiv. Ukrainian military officials have maintained they would only withdraw their heavy weapons if the ceasefire held.

The four ministers also called for the Organization for Security and Cooperation in Europe (OSCE) ceasefire monitoring mission, which was due to expire in March, to be reinforced and extended for another year.

"We call for the extension of its mandate with supplementary staff, equipment and financing," Fabius said, reading out a statement the four ministers had agreed upon. The statement called for all involved in the conflict to cooperate with the monitors and allow them complete access to areas under their control, to "verify the withdrawal of heavy weapons."

While Russian Foreign Minister Sergey Lavrov said the talks had been useful, his Ukrainian counterpart indicated dissatisfaction with one aspect of them.

"Unfortunately there was no political agreement on how to condemn what happened in Debaltseve," Ukrainian Foreign Minister Pavlo Klimkin said, referring to the strategic town between Donetsk and Luhansk that the separatists had seized last week in defiance of the ceasefire that should have begun on February 15. Further breaches of the ceasefire have been reported since then.

News of a possible breach came by way of Ukrainian reports of fresh attacks on another strategic city, the port of Mariupol, which is controlled by forces loyal to Kyiv. There have been fears that the separatists would target it to establish an overland corridor between Russia and the Crimean Peninsula, which Moscow annexed last March.

Ukraine and its allies insist Moscow is supplying the separatists with troops and equipment, which Russia has denied.

The European Union has been eager to ensure acrimony between Moscow and Kyiv does not endanger its access to Russian gas, but now Gazprom is warning a dispute over payments with Ukraine could do just that. (24.02.2015)