Representatives of six world powers are in Vienna for talks with Iran about its controversial nuclear program. Officials say there are still great obstacles to a final deal ahead of an imminent deadline. 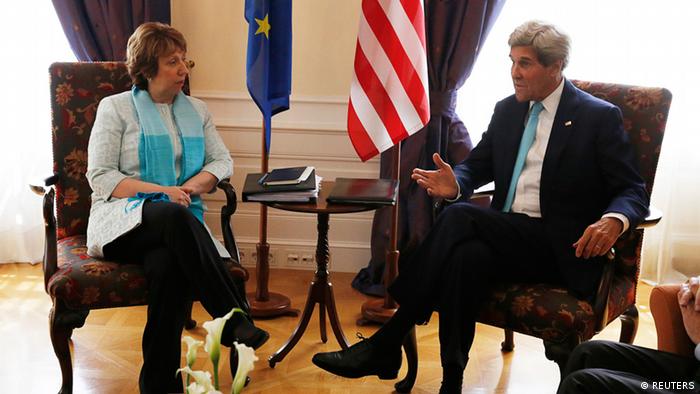 US Secretary of State John Kerry and the foreign ministers of Germany, Britain and France have gathered in the Austrian capital, Vienna, to reach a historic deal with Iran on curbing its nuclear activities in return for a lifting of international sanctions.

China and Russia, who are also involved in the talks over the next few days, are sending lower-ranking officials to the negotiations, which will also be attended by Iranian Foreign Minister Mohammad Javad Zarif.

The talks come ahead of a July 20 deadline to reach an accord.

The discussions are to focus on imposing long-term restrictions on Iran's uranium enrichment and tightening those on plutonium production, both of which activities can lead to the manufacture of nuclear warheads.

In exchange, the US and other powers would scrap a series of trade and oil sanctions. Many of these were lifted following an interim agreement in November that was contingent upon a deal being reached by the July deadline.

The January agreement did allow for a further six-month extension if necessary, and sources close to the talks say this is likely to be the outcome of Sunday's negotiations in Vienna in view of major differences between the two sides.

"Obviously we have some very significant gaps still, so we need to see if we can make some progress," Kerry said before meeting EU foreign policy chief Catherine Ashton, who is acting as chief negotiator for the six world powers.

His comments were echoed by a senior Iranian negotiator, Deputy foreign Minister Abbas Araqchi, who was quoted by state television as saying that "disputes over all major and important issues still remain. We have not been able to narrow the gaps on major issues and it is not clear whether we can do it."

Iran insists that its program is solely for peaceful energy production and medical research purposes, and hardliners in the country oppose any concession by moderate President Hassan Rouhani's government.

Going in the face of Western demands, Iran's Supreme Leader Ayatollah Ali Khamenei said this week that Iran would need to markedly increase its uranium enrichment capacity. He suggested increasing the number of enrichment centrifuges in the country from 10,000 to around 19,000.

Iran would also like to see any restrictions on its nuclear activities in place for only five years, while Western powers would like them to last much longer.

Kerry and the German, British and French foreign ministers are also expected to discuss an international push for a ceasefire in Gaza, and the Secretary of State will hold separate talks with his German counterpart Frank-Walter Steinmeier about the spiraling espionage dispute between the two NATO partners.