Israeli commandos have launched a raid into Gaza, exchanging gunfire with Hamas militants. Meanwhile, the Israeli military has vowed to intensify its bombing campaign against the densely populated Palestinian enclave. 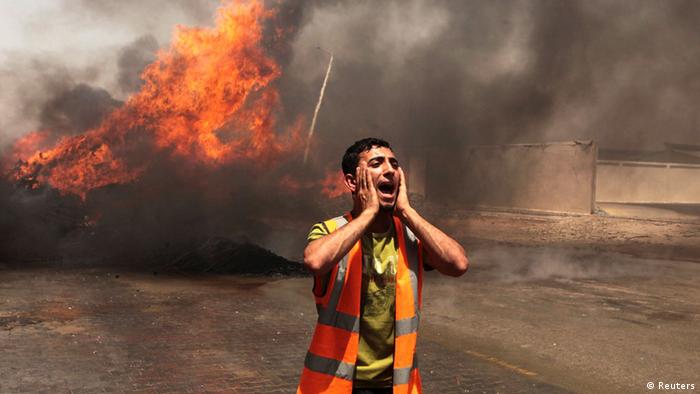 A team of Israeli navy commandos launched a small ground incursion on the northern Gaza coast on Sunday, in an attempt to destroy a site used to launch long-range rockets.

The commandos exchanged fire with Hamas militants and hit the site, according to the Israeli military, which said four of the commandos were lightly injured.

Hamas said that it had fired on the commandos before they reached shore, forcing them to turn back.

The raid was the first publicly acknowledged Israeli ground incursion into the Gaza Strip since "Operation Protective Edge" began earlier this week. Israel has not ruled out a ground invasion, mobilizing 20,000 reservists so far and massing troops on the border with Gaza.

Israel has launched more than 1,200 airstrikes against Gaza this week, killing at least 149 Palestinians. Many of the dead were civilians, including women and children.

The conflict between Israel and the Palestinians continues to escalate. DW takes a closer look at recent events that have, once again, brought the two sides to the brink of war. (10.07.2014)

US needs new answers in the Middle East

Amid the latest violence between Israel and the Palestinians, is it time for a rethink of US Mideast policy? (12.07.2014)

The Gaza conflict: an FAQ

As violence between Israel and radical terror groups in the Gaza strip continues, DW looks at the parties taking part in the conflict, why they're fighting, and what the international community is doing about it. (12.07.2014)

The UN has implored Israel and Hamas to cease fire as warplanes pound Gaza, killing at least 30 Palestinians Saturday. One of the targets hit Saturday by the Israel Defense Force was a mosque. (12.07.2014)

On Saturday, Israel destroyed a Palestinian charity for the mentally and physically disabled. According to its director, two people were killed in the strike, including a woman with cerebral palsy and a patient with severe mental handicaps.

Chief military spokesman Brig. Gen. Motti Almoz said Israel plans to intensify its offensive against Gaza over the next day.

"We are going to attack there with great force in the next 24 hours due to a very large concentration of Hamas efforts in that area," Almoz said.

The Israeli government has warned Palestinian civilians to leave northern Gaza "for their own safety." While critics have accused Israel of recklessly firing into densely populated areas, Israel says that Hamas uses civilians as human shields.

Hamas has fired hundreds of rockets into Israel, some of which have been intercepted by Israel's Iron Dome defense system.

So far, no Israelis have been killed by Hamas rocket attacks.