Urban flooding — who is responsible for Karachi's woes?

Heavy rains have wreaked havoc in Karachi — Pakistan's most populous city — unleashing floods and inundating neighborhoods and streets. Why does the country's financial hub find itself in this dire situation? 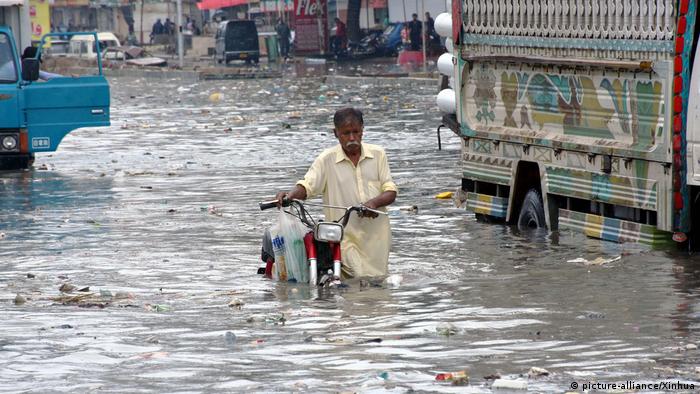 "I had to walk for nearly five hours to reach home from my workplace. It was raining heavily and I had to wrap a plastic bag around my mobile phone and other electronic gadgets," Saad Ahmed Shah, a senior executive at a financial organization in Karachi, told DW.

"Some of my colleagues are still stuck in the office, as it was impossible for them to get back home in these weather conditions," Shah added.

Karachi experienced its heaviest rains in almost a century, killing at least 41 people, city officials said Friday. Flooding that resulted has completely inundated several neighborhoods, with the country's National Disaster Management Agency (NDMA) saying that hundreds of thousands of people are still trapped due to waterlogging in low-lying slums. Citizens have been without electricity and mobile phone connection for hours.

More heavy rains are expected in southern and southwestern Pakistan over the next 48 hours, raising fears of further devastation.

Citizens are blaming the authorities for the catastrophic situation, saying there had been no preparation before the start of the regular monsoon season.

"The MET office had forecast heavy rains two months ago, but the authorities didn't do anything about it," Shah said.

Karachi residents complain that their city lacks basic infrastructure facilities despite its role as the nation's economic and financial hub.

Last year, the city, which is home to roughly 15 million people, was named among the 10 least livable cities in the world by the Economist Intelligence Unit (EIU) — the research and analysis division of the Economist Group — in The Global Livability Index 2019.

Since the late 1980s, Karachi has been governed mostly by the Muttahida Qaumi Movement (MQM) — a party representing Urdu-speaking migrants from India — and the Pakistan People's Party (PPP), which is more popular in the rural areas of the southern Sindh province. While the MQM has been in power locally, provincially it is the PPP that calls the shots. Both parties regularly accuse each other of neglecting the city.

However, after torrential rains inundated the city, both the MQM and the PPP came under fire for a lack of preparedness to deal with the situation.

"These are unprecedented rains due to climate change. The infrastructure (in the city) was not strong enough to withstand such heavy rainfall," Mehdi said.

"I reject claims that provincial authorities do not empower the local government. We provide them with 26 billion rupees (€300 million, $360 million) annually but local officials don't use them for the city's development," the provincial official said, adding that the PPP administration is working relentlessly to provide relief to Karachi's residents. But Raza Haroon, the secretary general of the Pak Sarzameen Party (PSP), a splinter group of the MQM, holds the PPP responsible for Karachi's woes. "We can only tackle the situation if the powers are decentralized to local bodies," Haroon told DW, adding that most political parties in the country only pay lip service to Karachi's plight.

"In the 2018 election, Prime Minister Imran Khan's Pakistan Tehreek-e-Insaf (PTI) party won 14 out of 21 National Assembly (lower house of parliament) seats from Karachi. Sindh's governor also belongs to the PTI, yet it hasn't done anything for the city. The PPP doesn't feel obliged to serve the city as it doesn't have much electoral representation here," he added.

Political differences only make a part of Karachi's protracted management crisis. Experts say that the current predicament is largely a result of rapid and uncontrolled expansion of the city in the past three decades.

"We need to construct roadside drainage channels without delay. We also need to ensure that the gravity-based adjustments of existing drains is done without any compromise," Noman Ahmed, a columnist who writes about urban planning, told DW.

"New developments in the city have blocked the drainage system. Also, informal settlements around major drainage lines have obstructed the flow of water," the expert added.

Large metropolises in South Asia, such as Mumbai and Colombo, have relatively better waste disposal systems, whereas in Karachi, garbage is usually dumped on streets that end up blocking drainage lines. Even little rain in the city can cause streets to flood and make life difficult for the residents.

"It is important that authorities regularly remove solid waste from the drains. As of now, city administration has not lived up to the challenge," Ahmed underlined.

A 'campaign' to take Karachi under Islamabad's control

In 2010, former president of Pakistan and chairperson of the PPP, Asif Ali Zardari, passed the 18th amendment to the country's constitution, devolving many financial powers to provinces. Khan's incumbent government criticizes the amendment and favors centralized powers. Members of his PTI party say that Karachi can prosper more under federal rule.

PPP supporters claim that Khan's party has launched a media campaign to undermine Sindh's provincial government on the pretext of the Karachi flooding.

"A malicious campaign is underway to pressure the PPP to roll back the 18th amendment and the National Financial Commission (NFC) Award. The federal government wants to bring Karachi under its control, but we won't allow it," PPP official Waqar Mehdi told DW.

In the past, Islamabad enjoyed more control over Karachi; however, it did not solve much of the city's problems.

But the rain destruction in Karachi has somewhat strengthened the narrative that local authorities are incapable of solving the city's problems. Some people have even urged the Pakistani army to take over the city's administration.

"Article 140A (of the 18th constitutional amendment) was introduced to empower the local government system, but in reality it has emboldened the provincial government to weaken local bodies," said PSP's Haroon.

Karachiites (residents of Karachi), however, say they are not interested in constitutional matters; they want their elected representatives to work harder to improve their living conditions.

"In a way, we are responsible for this crisis, for handing the reins of our city to corrupt politicians. We should blame ourselves," said Karachi-based financial executive Saad Ahmed Shah.