Monsoon rains caused a building to collapse in northern India, while 24 were swept away in Pakistan-administered Kashmir. The extreme weather has killed more than 100 people and the death toll is expected to rise. 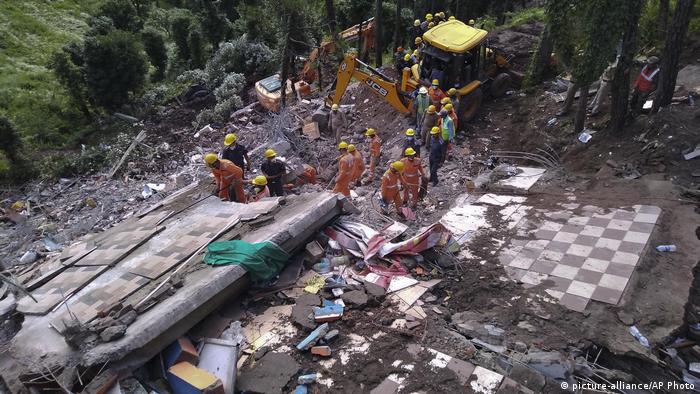 At least 12 people died when a three-story building collapse after monsoon rains hit an area of northern India, as monsoon rains continue to devastate South Asia.

The structure near popular tourist destination Shimla in the northern state of Himachal Pradesh collapsed on Sunday following days of heavy downpours.

Rescue workers used heavy machinery to remove piles of crumpled steel and wires from the debris, freeing 28 survivors from the rubble. Eleven of the dead were Soldiers who had gathered for a party in the building's restaurant.

After causing flooding and landslides in Nepal, three rivers in northeastern India were overflowing and submerging parts of the region, affecting the lives of more than 2 million people.

Officials said more than 100 people across the affected South Asian region had died, as floods and landslides caused by the annual monsoon season wreaked deadly havoc from the Himalayan foothills to low-lying camps housing Rohingya refugees.

Authorities have warned the death toll could rise as rescuers race against time to reach affected communities.

Also on Monday, officials said at least 24 people are feared dead due to flash flooding and landslides triggered by heavy rain in Pakistan-administered Kashmir.

"At least 24 people were swept away and have gone missing," said Saeedur Rehman Qureshi from the State Disaster Management Authority (SDMA) for Azad Jammu and Kashmir.

More than 100 houses were damaged while a mosque was swept away by the flash flood, Qureshi said.

"The army is assisting the local administration in the rescue and recovery mission," said Saqib Mumtaz, a spokesman for the National Disaster Management Authority (NDMA).

In Bangladesh, at least 29 people have died in the last week, including 18 who were hit by lightning and seven who drowned after their boat capsized in choppy waters in the Bay of Bengal.

Another 10 have died in overcrowded Rohingya refugee camps in the southeast of the country and thousands of shanty homes have been destroyed.

In Nepal, police said at least 67 have been killed in floods and landslides, while 30 more are missing.

The extreme weather has also devastated the lives of animals. Nearly 80% of Kaziranga National Park in the northeast Indian state of Assam - home to the endangered one-horn rhinoceros - has been flooded by the mighty Brahmaputra river, which flows along the sanctuary, forest officer Jutika Borah said.

Six deer trying to move to higher ground were killed by speeding vehicles on a highway crossing the park, Borah said.

Forest guards have been posted on the highway to provide a corridor for the animals.

Last week, people in Germany braced for a predicted heat wave that never came. We all know weather forecasting systems can be faulty. But why?