Militants from the self-styled "Islamic State" group have clashed with US-backed Syrian Democratic Forces in the strategically important town of Manbij. An ultimatum to leave appears to have been disregarded by IS. 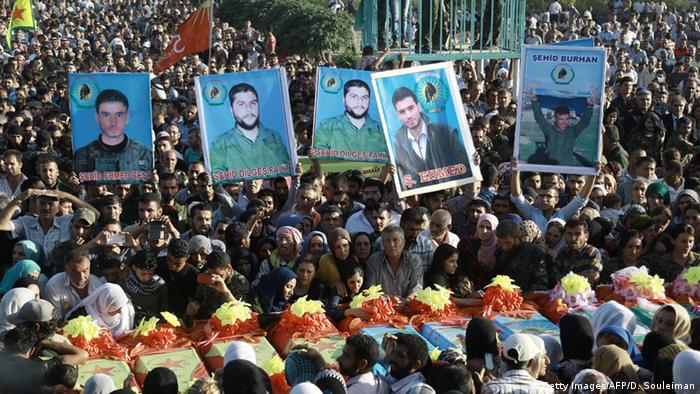 US-backed forces in the northern Syrian town of Manbij met fierce resistance from "Islamic State" (IS) fighters Saturday as they tried to capture the strategically important outpost. Manbij had been a key stop along the IS supply route from Turkey into its self-styled "caliphate" in Syria.

The Syrian Democratic Forces (SDF), an alliance of Arab and Kurdish fighters backed by the United States, surrounded Manbij a month ago but a bloody IS counter-offensive and concerns about the civilian population have hindered plans to seize control of the town.

On Thursday, the Manbij Military Council, a key member of the SDF, issued an ultimatum to IS fighters, saying they would be allowed to leave the city without a fight if they did so within 48 hours. That deadline had since passed. 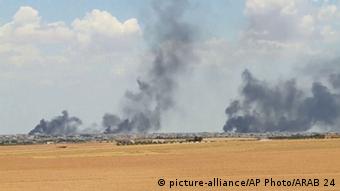 In this June 8 image, smoke rises from the city of Manbij

Coalition spokesman Colonel Chris Garver said Friday that IS fighters were mounting an particularly tough defense, especially as SDF units pressed deeper into the town. "[It's] sort of different than what we saw in Ramadi and what we saw in Fallujah," he said, referring to two Iraqi cities where IS fighters retreated earlier this year.

"It's a fight like we haven't seen before," said Garver, adding that the SDF now controlled about half the town, an area home to at least 2,000 civilians. Thousands of civilians had already fled Manbij. More than half Syria's population has been displaced since civil war erupted in 2011.

The ultimatum from the SDF for IS to leave Manbij came after reports that at least 56 civilians were killed Tuesday in US-led coalition airstrikes near the town. Britain-based monitoring group the Syrian Observatory for Human Rights said 11 children were among those killed as they fled a nearby village. Similar airstrikes in Manbij on Monday also resulted in civilian casualties, it was reported.

Conflicting information about death tolls in the aftermath of attacks is common in Syria, where many areas are inaccessible to independent media. The opposition Syrian National Coalition had called for airstrikes to be suspended while the incidents were investigated. Human rights group Amnesty International has also called for clarification about civilian casualties in airstrikes suspected to have been carried out by the US-led coalition. The coalition said it had opened an investigation.

Meanwhile, US-led airstrikes have continued. Both the Manbij Military Council and US coalition spokesman Garver have accused IS of using civilians as "human shields."

Video of the attack shows an airstrike against an apparent IS convoy leaving Fallujah. It's the latest blow to the jihadi group, but it retains the ability to strike abroad with deadly suicide bombers. (30.06.2016)