A truce has taken hold in the one-time commercial hub of Aleppo, activists have said. Despite the news, airstrikes have hit a refugee center near the Turkish border killing at least 28 people. 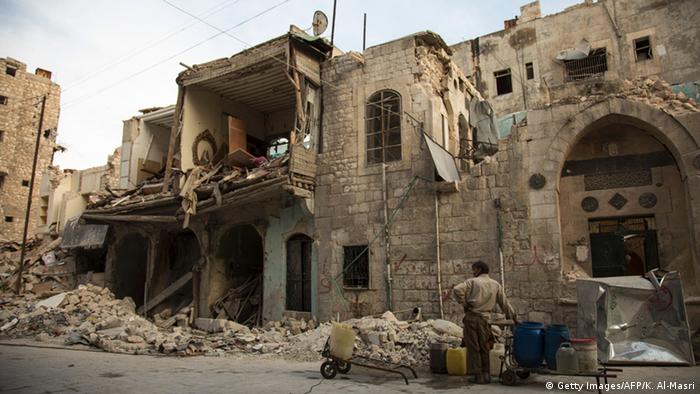 The northern Syrian city of Aleppo experienced relative calm on Thursday under a temporary cessation of hostilities agreement brokered by Russia and the United States, activists said, giving welcome relief to a community battered by two weeks of deadly violence.

Residents confirmed to Reuters news agency that fighting had subsided to a large degree.

Syrian state media said the army would abide by a "regime of calm" in Aleppo for 48 hours as of 1 a.m. local time on Thursday (2200 UTC Wednesday).

The Britain-based Syrian Observatory for Human Rights (SOHR), which monitors the Syrian conflict via a network of activists on the ground, said there had been some brief rebel shelling of a regime-controlled area in the city in an attack that killed one civilian and injured two. The army blamed Islamist insurgents for violating the truce. Residents, however, said the violence had eased by morning.

The relative calm in Aleppo has not, however, spread to the rest of the war-torn country.

SOHR announced later on Thursday that they had received reports of an airstrike on a refugee camp near the border with Turkey killing and wounding dozens. The Observatory did not immediately have information about who had carried out the strike or the exact number of casualties.

The Observatory has said at least 285 civilians have been killed in attacks by regime forces and rebels in Aleppo since fighting escalated on April 22. The city was once Syria's commercial hub but is now divided between the government-held west and the rebel-controlled east.

The recent surge in violence in Aleppo shattered an earlier cessation of hostilities agreement brokered by the United States and Russia, which each back rival sides in the conflict. That truce, like Wednesday's agreement, also excluded the "Islamic State" (IS) extremist militia and the al Qaeda-linked al-Nusra Front. 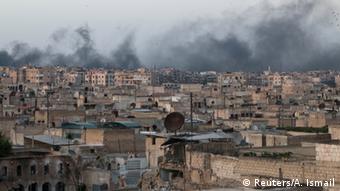 Aleppo has been hit by numerous airstrikes

Jordanian border guards said on Thursday that some 64,000 Syrians who have fled the intensified violence in and around Aleppo were stranded at the border with Jordan, which has already taken in more than 630,000 Syrian refugees. The kingdom is now taking in only a few dozen refugees each day after screening them in a bid to prevent jihadis from entering the country.

Elsewhere in Syria, however, fighting has persisted, with Syrian President Bashar al-Assad vowing to achieve a "final victory" against rebels in Aleppo and across Syria, according to state media.

IS militants captured the Shaer gas field in eastern Syria on Thursday after trying to gain control of it for three days. At least 34 regime soldiers and 16 of the jihadis were killed in the fighting, according to the Observatory. The militants had briefly controlled the same field in 2014. The group still also holds most of oil-rich eastern Syria.

The IS gain comes after the extremist group recently lost some ground in central Syria, with government forces recapturing the ancient city of Palmyra at the end of March.

The war in Syria has killed more than 270,000 people and forced millions from their homes since it erupted in 2011.

Russia says it is pressing for "silence" in Aleppo after being urged by the US to help end the carnage in Syria's northern hub. Top diplomats are in Geneva, trying to salvage a February ceasefire. (02.05.2016)

Northern city of Aleppo excluded from local ceasefires in Syria

The Syrian army has announced ceasefires near Damascus and the coastal city of Latakia. The US said it was focusing on these areas despite deadly clashes in the northern city of Aleppo. (30.04.2016)