FIFA's Executive Committee has voted to publish a report into alleged corruption compiled by its former ethics investigator. It also rejected the idea of reopening the bidding processes for the 2018 and 2022 World Cups. 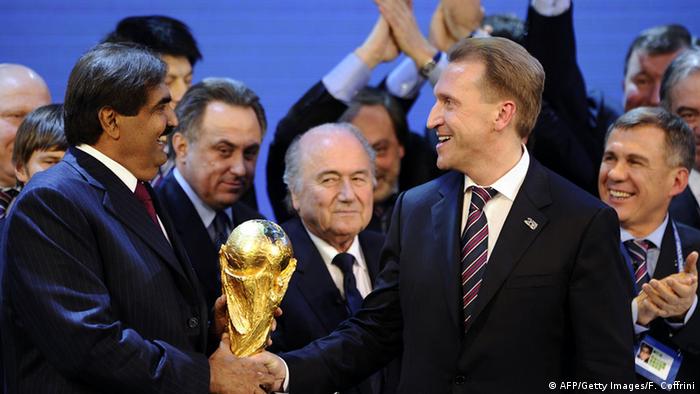 FIFA President Sepp Blatter said in a statement posted on the website of soccer's world governing body on Friday that the Executive Committee, currently meeting in Marakesh, Morocco, had unanimously agreed to release a legally "appropriate version" of Michael Garcia's report.

This was understood to mean that some parts of the report would likely be redacted out, in part to protect witnesses who spoke to Garcia's team over the course of his inquiry into alleged corruption during the bidding processes that saw Russia awarded the 2018 World Cup and Qatar the 2022 event.

Blatter also pointed to the need to ensure that FIFA did not harm investigations or proceedings against individuals that were launched as a result of Garcia's findings.

"Now it is important that the work of the Ethics Committee continues and that any instances of wrongdoing are fully investigated and their perpetrators pursued and sanctioned," the statement said.

The FIFA president, though, ruled out reopening the bids for the 2018 and 2022 Cups.

"We will not revisit the 2018 and 2022 vote and a report by Mr. Scala (chairman of the independent Audit and Compliance Committee) supports the view that there are no legal grounds to revoke the Executive Committee's decision on the award of the 2018 and 20122 World Cups," Blatter said.

The ExCo decision comes two days after Garcia, a top US lawyer who was the lead investigator looking into allegations of corruption surrounding the two bidding processes stepped down. Garcia cited a "lack of leadership " by FIFA over his inquiry, which he said had revealed "serious and wide-ranging issues" in the bidding for the two events.

His resignation came in protest against a summary of his report released by FIFA judge Hans-Joachim Eckert, which stated that no serious corruption had been found and that the processes of bidding for neither of the events needed to be repeated.

Garcia resigned a day after FIFA rejected his appeall to get his full report released.

FIFA will continue its review of the bidding process for the 2018 and 2022 World Cups, at least internally. FIFA's chief investigator and its ethics judge, at odds since the first results were published, met on Thursday. (20.11.2014)

The president of the German Football League (DFL) has told a domestic football magazine that he has already urged FIFA boss Sepp Blatter to quit his post over the Qatar World Cup bid. He's got a replacement in mind too. (24.11.2014)