Greece is finding itself increasingly isolated in the refugee crisis. As pressure grows on its northern neighbor Macedonia to close the border, analyst Thanos Dokos tells DW that won’t be a good solution. 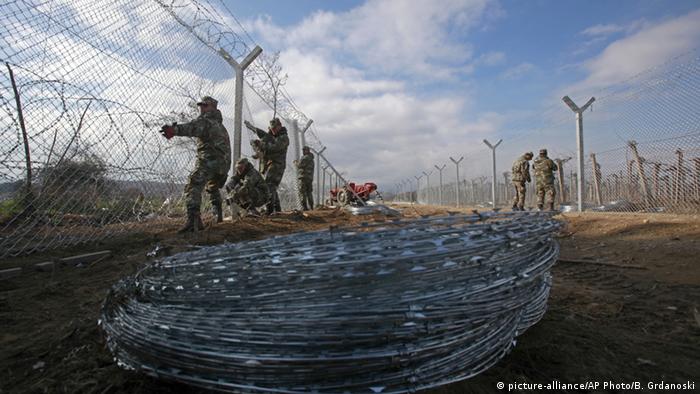 DW: Mr. Dokos, as Greece continues to struggle with the influx of refugees, some European Union countries are openly suggesting a "Plan B," which would rely on the Republic of Macedonia to slow down the influx or even completely stop the movement of the refugees and migrants on its southern border. What would be the consequences if this plan becomes reality?

Dokos: Indeed, disagreements have been especially pronounced in some of the eastern European countries, which have challenged European Council decisions regarding burden-sharing in the re-allocation of refugees arriving in Italy and Greece. Some of these leaders seem to have conveniently forgotten that Western Europe did not close its borders to them in 1956 or 1968. They have also forgotten their support for the war against Iraq launched by the neo-conservative US government in 2003, which accounts to a large degree for the rise of ISIS [an alternative name for the jihadist group "Islamic State": ed.] and many of the Middle East's current problems and thus, by extension, the current refugee crisis.

Regarding bilateral relations with the former Yugoslav Republic of Macedonia (FYROM), Greece understands that its northern neighbor is under heavy pressure itself. It is a transit country, as is Greece, and will be heavily influenced by the closing of borders in countries to its north. It should also be noted that cooperation on the refugee crisis has been quite good so far. 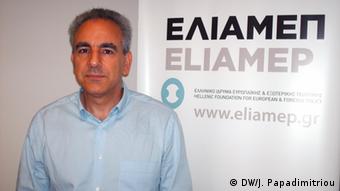 A unilateral decision by the FYROM to close its borders with Greece will certainly have a negative impact on bilateral relations. It will also affect FYROM in ways that are described below. Finally, Greece will remain FYROM's immediate neighbor, whereas the Visegrad countries and the other hardliners will probably lose interest in our part of the world once the refugee/migration crisis loses its urgency.

Macedonian authorities are finishing the second barbed-wire fence on the southern border. What is the view from your (Greek) side of the border? Will this be enough to stop the flood of refugees and migrants?

Previous experience has taught us that when people are desperate enough to flee insecurity and poverty in their own countries, and when the expected economic profit for traffickers is high enough, fences cannot stop the refugee/migration flows. At best they can reduce the numbers (as the technologically sophisticated fence at the US-Mexican border shows). Traffickers will also try to use additional migration routes, either through other countries or through mountainous or forested areas where border controls are less effective. Organized crime in connection to human/migrant trafficking will also flourish on both sides of the border between Greece and FYROM. Finally, FYROM will also be faced with the problem of migrants that are being arrested after crossing into the country. Greece will no longer be under any obligation to take them back.

The Greek minister in charge of migrants, Ioannis Mouzalas, stated last Wednesday that he expects "unilateral moves" from Macedonia in the refugee crisis. Is Greece prepared to accommodate huge numbers of migrants should countries further along the Balkan route block access for refugees?

Greece is preparing itself for a worst-case scenario should FYROM decide to close its borders with Greece. In that case, a limited number of migrants can be accommodated for a limited period of time. However, Greece is still suffering from its economic crisis, and its capacity to accommodate refugees and migrants is clearly finite. Furthermore, detaining a large number of refugees indefinitely is illegal under international humanitarian law, as well as being inhuman and practically impossible. The problem is that Turkey has not been implementing the re-admission protocol, and repatriation to countries of origin (in the case of migrants) is extremely problematic.

European countries have so far offered two concepts for the solution of the crisis. The first one, supported by the Visegrad group, Slovenia and Austria, advocates building fences and closing the borders on the Balkan route. The other solution supported by Germany and other western European countries includes a deal with Turkey containing the offer to take Syrian refugees directly. Which one do you expect to prevail?

It is interesting that, with the exception of Austria, all hardliners are countries receiving practically no refugees/migrants. The group led by Germany is shouldering most of the burden, and these countries insist on a “European solution”.

In this context, our policies should be based on the following assumptions: The preservation of Schengen, without unjustifiably and unfairly sacrificing any of its members, is very important; we need to deal with jihadist terrorism and radicalization in our societies; Europe has a moral duty to offer asylum to a substantial number of refugees. Unlimited access, however, is impossible, as the EU's absorption capacity is finite.

A quick end to the fighting in Syria through diplomatic means should be an obvious priority. The inclusion of Russia and, if possible, Iran in the process would considerably increase the prospects for an agreement. A well-organized and financially supported reconstruction and reconciliation process may convince significant numbers of refugees that it's safe to return home. In the meantime, increased support to Jordan, Lebanon and Turkey should be another important priority. Access to the labor market and the education system would be critical factors in a refugee's decision on whether to stay in those countries or try to get to Europe. Increasing repatriation rates through agreements between the EU and important countries of origin should be another priority, although such an objective would be extremely difficult to achieve.

We also need various filters to decrease the attractiveness of the “Greek road.” The cooperation of Turkey - not yet visible - is of critical importance. But Ankara needs incentives as well, such as a visa-free regime, which is not expected to cause any significant flow of Turks to EU countries, and economic support. Turkey should also clamp down on traffickers and suspend its own visa-free regime for Moroccans and some other nationalities. The key element, though, would be to establish "hot spots" on Turkish soil for the direct resettlement of refugees in various EU countries. This would alleviate the pressure on Greece and save many lives in the Aegean.

It is my hope that the concept of a common “European solution” will prevail, but I am extremely concerned because of a combination of problematic trends: poor leadership, right-wing rhetoric and a return to national policies at the expense of European ones.

Thanos Dokos is the director-general of the Hellenic Foundation for European and Foreign Policy (ELIAMEP). He served as the director for research, strategic studies division, in the Greek Defense Ministry (1996-98) and as an advisor on NATO issues to the Ministry of Foreign Affairs (1998-1999).

Are the Visegrad states sealing off the EU?

The Visegrad states want to shut down the Balkan route to refugees. In doing so, they could effectively exclude Greece from the Schengen zone. DW's Christoph Hasselbach looks at the issues. (16.02.2016)

Hungary, Poland, Slovakia and the Czech Republic - known as the Visegrad Group - are set to discuss border protection and the refugee crisis. They might help Macedonia close its Greek border to migrants. (15.02.2016)

As Greece continues to struggle with the influx of refugees, some EU countries hope that its northern neighbor Macedonia can deter them. Amid a deep political crisis, the Balkan country is a questionable choice. (10.02.2016)