Fear, speculation - and hope - mark Hungary's shift to the right

The arch-conservative Fidesz party stormed Hungary's elections, taking more than 50 percent of the vote. An extreme-right party came in third place. What does this sudden rise on the right say about Hungarian politics? 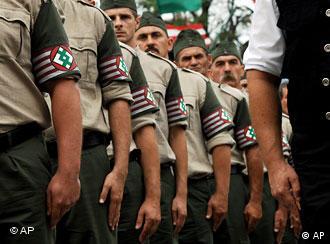 A party linked to the extremist 'Magyar Garda' has reached parliament

Hungarians handed the Socialist leadership their hats in Sunday's parliamentary elections. Frustrated by eight years of Socialist rule marked by corruption, high unemployment, and unpopular austerity measures, the people have spoken. And what they have said is this: Out with the old and ineffectual, in with the extremely conservative, economically liberal Fidesz party - populist rhetoric and all.

Fidesz is run by veteran politician Viktor Orban. The party got 53 percent of the vote in the decisive first round of Hungary's national elections, meaning they are certain to take the reins of government.

And if they get enough votes in a second election round set for April 25, the party could garner the two-thirds parliamentary majority needed to make significant changes to Hungary's political system - without needing opposition support. 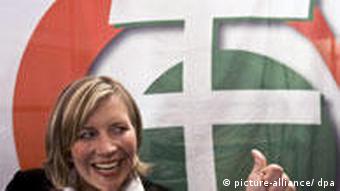 Jobbik got three of 22 mandates for EU elections in 2009

Meanwhile, a further 17 percent of the vote went to the radical right opposition party, Jobbik, a group known for its anti-Roma, anti-Semitic, anti-establishment rhetoric. Jobbik, or Movement for a Better Hungary, was founded by Gabor Vona, 31, who is also the founder of the Magyar Garda (Hungarian Guard). Garda members wear black paramilitary attire and have been known to attack Roma compounds.

Given Jobbik's history, the European media began wringing its hands over the rise of the far-right in Hungary even before the votes were tallied. Many commentators mourned the turn of events in a country that was once considered the brightest star among Eastern and Central Europe's transitional democracies.

But others who are more familiar with the dire economic and political situation there say the results were exactly what was expected.

"People were dissatisfied with the Social Democratic coalition government. Hungary has been strongly affected by the economic and financial crisis," said Karin Boettger, a research associate at the Institute for European Politics (IEP) and the coordinator of the German-Hungarian Forum.

Nora Szoeke, a partner in Szoeke & De Wijs Policy Consulting, which specializes in Eastern Europe political consulting, said the real surprise was that Jobbik didn't get even more votes. 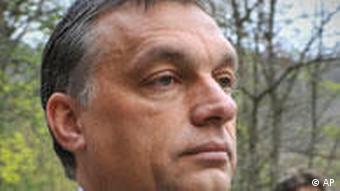 "After the European election last year, everybody knew the extreme right was strong," Szoeke said. "From my point of view it was a bigger surprise that Jobbik only got 17 percent and not more. I was afraid they would do better."

The landslide win for Fidesz could mean an end to years of political stagnation in Hungary. For years, Fidesz has been locked in a battle of wills with the ruling Social Democrats. That stalemate has stymied any efforts towards political reform, left Hungary buried in debt, and given voters a good look at a government steeped in corruption and mismanagement.

This dissatisfactory situation creates a fertile field for Jobbik leader Vona to sow his racist and xenophobic rhetoric. And much to the dismay of many European observers, Fidesz leaders have been deafeningly silent when it comes to criticizing Jobbik's racist cries.

But according to Szoeke, the fact that Fidesz doesn't denounce Jobbik's comments doesn't make it a racist or xenophobic party itself. She believes it is merely a strategy calculated to attract voters who otherwise could be lost to causes that are even further to the right.

"In Hungary you can't get votes with pragmatism. So this is why they use this strong rhetoric," Szoeke said.

Still, Szoeke warns that the xenophobia and racism in Hungarian politics is different from that in other European countries, where it is also on the rise.

"In Hungary the extreme right is more embedded within the society," she said. "It's not just an extreme fringe group that supports Jobbik … it could be any voter who has been disappointed by the government and politics up to now."

The fact that Jobbik voters are not just a fringe group, and the fact that "the leaders of these parties are intellectuals, makes it more dangerous than elsewhere in Europe," she said.

Boettger, of the IEP, said she believes the rise of right-wing politics in Europe can be seen, at least in part, as a direct result of EU enlargement.

"Some of the political movements that would normally take place in democracies …were kept under a tight lid due to the EU enlargement process," Boettger surmised. "There was a national consensus about wanting to become part of the EU, and that's where the energy went. It meant that a full range of discussion in politics weren't given priority. And they are coming out now."

Whatever the reason for the success of Fidesz and Jobbik, one result of their victory is that the government is likely to have the power to break the ongoing political stalemate - and finally pass much needed reform. Among the changes that have been discussed is the possibility of changing the order of government itself, from a system with a prime minister to one with a more powerful president, ostensibly to be based on the French model of government.

If that were to happen, it would be a move in the wrong direction, according to Szoeke.

"They could use this power for making big reforms that should have been made long ago in Hungary - reforming the pension system or health care. But on the other hand, Fidesz could use it to make their own party more powerful, and I'm a bit afraid they will do this," she said.

But for analyst Boettger, such fears are unfounded.

"I think the party system has been very stable in Hungary… I think a lot of things will be dealt with more continuously than is seen by the media," she said.

The idea that Jobbik and Fidesz will join together to push through mounds of xenophobic legislation in the country has also been cause for panicked speculation by observers and the media, Szoeke noted. But that scenario is highly unlikely.

"Jobbik rejects Fidesz. And Jobbik is a protest group; they are 'anti'. So they won't work together with anybody," Szoeke said.

Just how much power Fidesz will actually gain in the April elections, and what the party will do with it, ultimately remains to be seen.

Jewish group praises Germany for its prosecution of Nazis

In its annual report on the international community's efforts to bring ex-Nazis to justice, the Simon Wiesenthal Center has awarded Germany the highest possible grade. This is the first time Berlin has earned an "A." (12.04.2010)