The FBI has released 16 heavily redacted pages that describe contacts some of the hijackers had with Saudi associates in the US. However, it offers no evidence of the government in Riyadh being complicit in the plot. 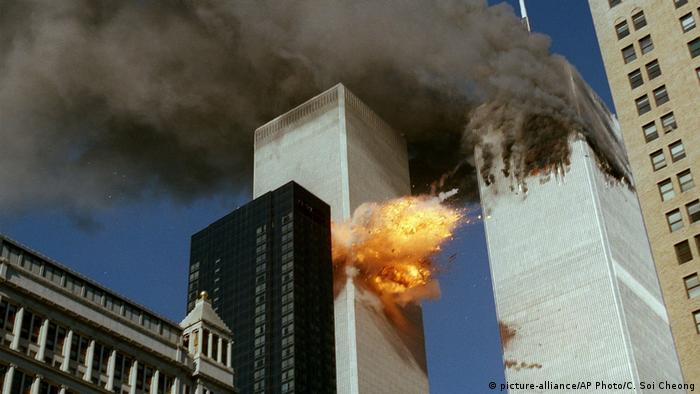 The Twin towers in New York burning after two hijacked planes crashed into them on September 11, 2001

The Federal Bureau of Investigation has released a newly declassified document pertaining to logistical help provided to two of the Saudi hijackers before the September 11, 2001 attacks.

The 16-page document was released late Saturday, on the 20th anniversary of the attacks.

The report, which is partially redacted, chronicles contacts the hijackers had with Saudi associates in the US, but gives no evidence of the government in Riyadh being complicit in the plot.

The document is the first investigative record to be disclosed following an executive order by President Joe Biden for a declassification review of materials that have remained out of the public view in the last two decades.

The pages, which are heavily redacted, outline a 2015 interview with a person who was applying for US citizenship and years before had repeated contact with Saudi nationals who investigators said provided "significant logistical support'' to several of the hijackers.

Families of the 9/11 victims had called on Biden to miss Saturday's 20th anniversary events if he did not declassify documents that they have asserted will show Saudi Arabian authorities supported the terror plot which killed nearly 3,000 people.

Families of the victims, businesses and several insurers, have sued Saudi Arabia seeking billions of dollars.

The Saudi government has continued to deny any involvement. On Wednesday, the Saudi consulate in Washington had said that it supported the full declassification of all records to "end the baseless allegations against the Kingdom once and for all.''

The embassy maintained that any allegation that Saudi Arabia was complicit was "categorically false.''

On Saturday, a statement released on behalf of the organization 9/11 Families United said that the 16 pages released by the FBI put any doubts about Saudi complicity to rest.

"Now the Saudis' secrets are exposed and it is well past time for the Kingdom to own up to its officials' roles in murdering thousands on American soil," the statement read.