After 67 years, Freiburg have bid farewell to their beloved stadium in style. In October, they will move into a new, modern arena, but the memories of one of Germany's most iconic football grounds will remain. 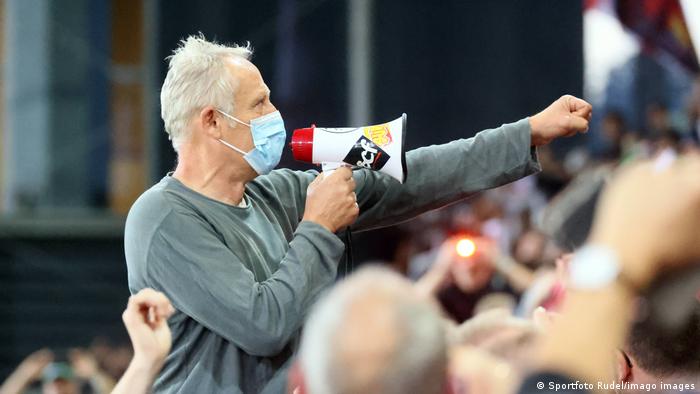 Nestled in the valley of the Dreisam River just east of Freiburg city center, the Dreisamstadion is many things to many people.

Picturesque with its spectacular location in the Black Forest, old school with its aging terraces and steep stands, freezing cold in winter, beautifully warm in summer, a bogey ground for Bundesliga giants — and commonly considered the "worst away end in Germany" for visiting supporters.

But, for 67 years, it's been home for Sport-Club Freiburg.

In the almost seven decades since it opened on September 1, 1954, the stadium has played host to Freiburg games in each of Germany's top three divisions, plus UEFA Cup games, men's and women's internationals, and even the Dutch national team, who trained there during the 2006 World Cup.

On Sunday, it hosted men's Bundesliga football for the 360th and final time, with head coach Christian Streich impressing upon his players the need to strike the right balance between the emotion of the occasion and the job to be done on the pitch against Augsburg.

He needn't have worried. Lukas Kübler, Lucas Höler and Vincenzo Grifo (penalty) scored the Dreisamstadion's 997th, 998th and 999th Bundesliga goals to end the game as a contest by halftime. 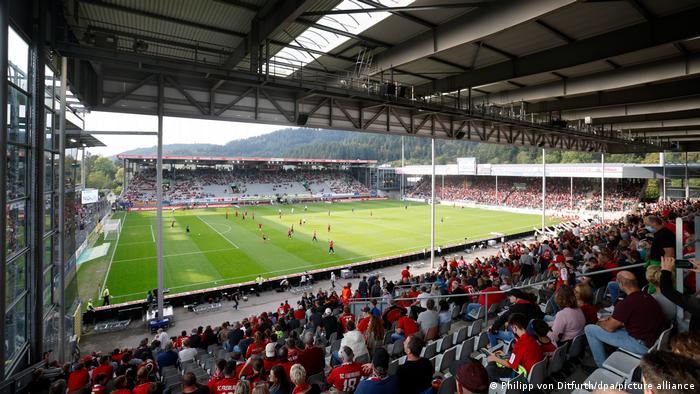 Freiburg's Dreisamstadion is one of Germany's most iconic football grounds

The 14,000 Freiburg supporters were free to enjoy the final 45 minutes inside a stadium that reflects its tenants more than any other in professional German football. SC Freiburg and the Dreisamstadion: bywords for tradition, beauty, friendliness, sustainable financial management and good, honest football.

And, if there is a single Freiburger who personifies those values himself, it's Streich. A former Freiburg player, the 56-year-old is now the Bundesliga's longest-serving coach, having taken charge of 363 games since 2011.

At full-time, with tears in his eyes, Streich climbed into the north stand behind the goal, took a megaphone from the ultras and led the stadium in song: "Im Dreisamstadion, hier sind wir zuhaus" — "At the Dreisamstadion, this is where we are at home."

"I don't belong on the terraces," he then admitted. "But I think a few people would have been disappointed today if I hadn't gone. It's been 25 years. A long time. Working here every day, innumerable matches, thousands of training sessions. Now I can enjoy it."

A pitch too short and one goal lower than the other

And yet no one could have envisaged that the plot of land in the valley to the east of town would come to have such meaning for the people of Freiburg when the Sport-Club first moved there in 1954. The team had been without a home since the end of World War II, after their old ground had been commissioned for use by the Luftwaffe in 1936.

In 1970, a stand with 480 covered seats was added. A further expansion followed in 1978 and, by 1980, a new main stand and expanded standing terrace increased capacity to 15,000. Floodlights were finally added after the club's first promotion to the Bundesliga, in 1993, with the capacity reaching 18,000.

The stadium reached its current 24,000 capacity in 1999, making it the third-smallest Bundesliga stadium this season, after Union Berlin's Stadion an der Alten Försterei and Greuther Fürth's Sportpark Ronhof.

Since Freiburg's arrival in the top flight, the Dreisamstadion has been a unique location in German football — not least because its pitch is technically 5 meters (16.4 feet) too short and one goal is 98 centimeters (38.6 inches) lower than the other, the pitch sloping south to north.

Only special dispensation from the German Football League (DFL) allows Freiburg to play there, and it has proven a notoriously difficult place to go for visiting teams.

In the 1990s, it took Bayern Munich five attempts to finally win in Freiburg for the first time, even suffering a 5-1 thrashing in August 1994. Even Pep Guardiola lost in Freiburg, a 2-1 defeat in May 2015.

In total, Bayern only won 11 of their 21 trips to the Black Forest; their last game there last season also ended in a 2-2 draw.

Similarly, Borussia Dortmund have only won in Freiburg on 10 occasions, losing on their last two visits. Borussia Mönchengladbach have the worst record at the Dreisamstadion, winning only once. 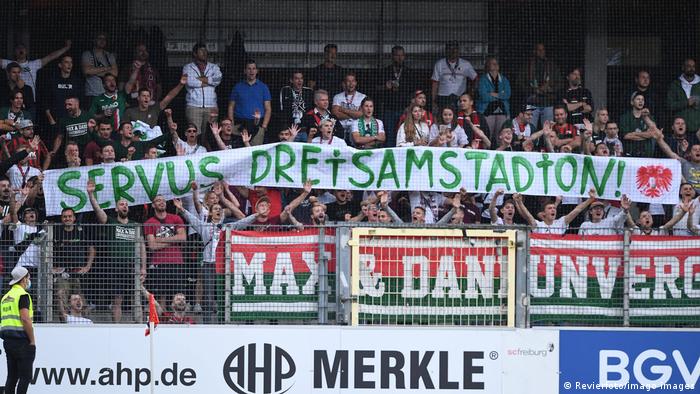 'Goodbye, Dreisamstadion!' Even the traveling Augsburg supporters said their farewells

Flying golf balls and the worst away end in Germany

There will also be a few negative memories for Freiburg. The visit of Bayern on April 12, 2000, remains deeply etched in the memory. In the final stages of a 2-1 win, goalkeeper Oliver Kahn was struck by a golf ball thrown by a 16-year-old Freiburg fan behind his goal, drawing blood and earning Freiburg a fine of 75,000 deutsche marks.

And, on November 10, 2019, coach Streich was brutally body checked by Eintracht Frankfurt's David Abraham, sending him sprawling to the ground. Abraham was sent off and, in the melee that followed, so was Vincenzo Grifo.

The traveling Augsburg supporters in the southeast corner might not have seen Grifo's goal; the away section in Freiburg is commonly considered the worst in Germany by away fans — low down and hidden behind fences, netting and pillars, but iconic nonetheless.

All of that is now history. In October, Freiburg will move to the new, modern Europa-Park-Stadion just north of the city center, built at a total cost of just over €130 million ($152.5 million). It will be officially opened with a friendly against second-division side FC St. Pauli on October 7, before the Bundesliga visit of RB Leipzig on October 16.

"When something is beautiful, it's difficult to let go, but all things come to an end," Streich said before the match. "But I can't pretend that we've all been thinking 'Oh no!' Something new is coming, something positive, a great new stadium which we have all worked toward. Nobody has gifted it to us.