More than 2,000 people rallied in the western German town of Ingelheim in a demonstration against plans to celebrate the date. The Hitler rally went ahead after organizers got a ban overturned by a regional court. 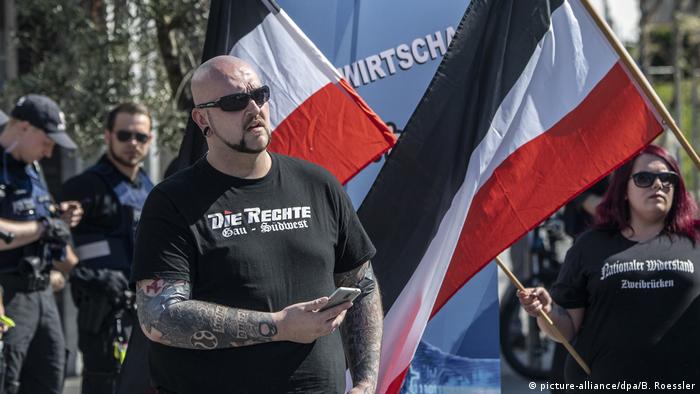 Thousands of people packed into the center of the small German town of Ingelheim near Frankfurt on Saturday in protest at plans to celebrate Nazi-era dictator Adolf Hitler's birthday.

A right-wing group planned the rally to mark the 130th anniversary of Hitler's birth and expected 50 people to attend. But only 20 showed up, according to the German news agency DPA.

The Allgemeine Zeitung newspaper put the attendance of the Hitler rally even lower, at just 14.

The newspaper reported that as the small group began their march at 3 p.m local time (1300 UTC) on Saturday, the counterdemonstrators made considerable noise, drowning out the speech of the right-wing leader.

The Hitler rally, which was held under the banner "Maintaining the homeland, promoting the family and shaping the future," was initially banned by city officials, who argued that it would violate "citizens' sense of dignity, custom and morals." Organizers challenged the ban, a bid which a regional court granted, allowing the rally to go ahead.

The larger rally saw protesters wave banners that read "More heart, less hate" and "Can we swap a Nazi for every refugee?"

On Friday, the World Jewish Congress urged European officials to take measures against a series of planned neo-Nazi gatherings over the weekend to mark the Führer's birthday.

Countries where neo-Nazi rallies were due to take place included Ukraine, Bulgaria, Italy and France.

The mayor of a central German town has apologized after a Nazi-era advertisement appeared without comment in an official gazette. It even announced a speech by dictator Adolf Hitler. (25.02.2019)

A set of paintings that were attributed to Adolf Hitler have failed to find buyers at a highly controversial auction. The sale took place after a number of paintings were seized on suspicion they were fake. (09.02.2019)

Canada's national library has acquired a book owned by Adolf Hitler that shows his plans for Jewish people living in Canada and the US. The book shows what could have happened if World War II ended differently. (27.01.2019)

A panel charged with investigating possible Nazi salute by Wayne Hennessey has cleared the goalkeeper of wrongdoing. They said he showed a "very considerable – one might even say lamentable" ignorance of Nazi Germany. (16.04.2019)

December 1 marks exactly 60 years since Germany established an office to prosecute Nazi criminals. Chief Prosecutor Jens Rommel tells DW that generations after WWII, much remains to be done to bring Nazis to justice. (01.12.2018)

The German government has described "shameful scenes" at the Reichstag after far-right protesters caused chaos on its steps. The German president has warned citizens against apathy towards right-wing extremism.