More than 70 women, 20 different countries and one passion: football. An exhibition traveling around Germany is aiming to make female football supporters more visible by telling their stories. 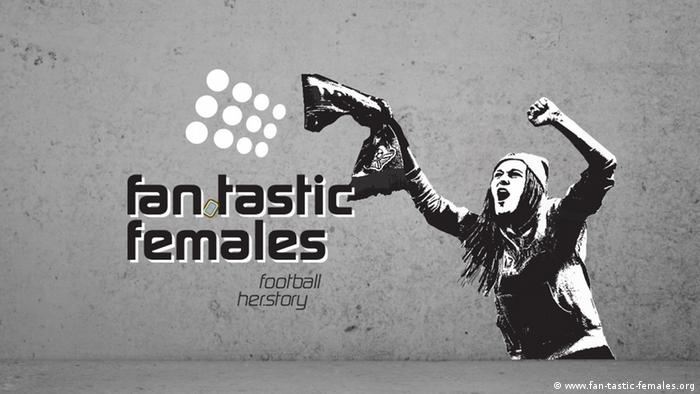 "You’re going to go hungry tonight because your girls are hanging around in the ground with you," read the banner from the Dynamo Dresden supporters during their visit to St. Pauli in December.

The actual language used was much more offensive, but the message was clear: Women do not belong inside a football stadium. Officials and supporters of both clubs, and fans across Germany, condemned the banner. But it wasn't just sexist, chauvinistic and derogatory; it was also completely at odds with reality.

Female faces are a common sight at Bundesliga matches, whether in the more expensive seating areas or bouncing around and chanting on the rowdier standing terraces. Almost 30 percent of stadiumgoers in Germany's top two divisions are female. More than 1 million women and girls are members of German football clubs and 40 percent of TV viewers for men's German national team games are female.

And it's these faces that are the subject of Fan.Tastic Females, an exhibition currently touring Germany and set to go abroad as well.

"We didn’t just want to point fingers and say 'sexism in football is bad,'" explains Daniela Wurbs, former CEO of Football Supporters Europe (FSE), who helped co-ordinate a team of over 70 fans from all over Europe to put together the exhibition. "We wanted to turn it on its head and put women on a pedestal and make them visible in football."

The exhibition achieves this via a series of video clips featuring more than 70 female fans from over 20 different countries – old and young, home and away, from the terraces to the boardroom – whose stories are viewable by scanning QR codes on a smartphone.

From 15-year-old Fortuna Düsseldorf ultra Dana to 79-year-old Arsenal fanatic Maria, and everywhere in between, the tapestry of female football stories hidden behind the QR codes is vast. Some stories, such as Lazio fan Claudia's experience of trouble at a Rome derby, aren't particularly unusual. Others, such as women's rights campaigner Zahra's fight for equality in Iran, are truly extraordinary. 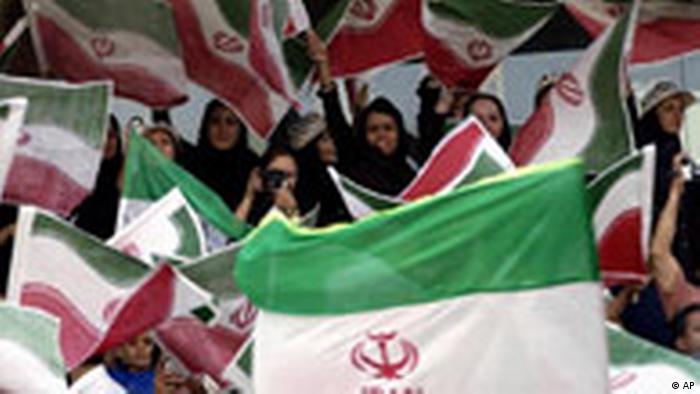 Some of the women featured are more than just fans. Julia Düvelsdorf is a supporter liaison officer at Werder Bremen, while Anna Pierre is on the board of Swedish giants AIK Solna. Both have had to overcome hurdles to progress through one the most male-dominated environments in society.

The further women progress into leadership roles within football, the more gender becomes an issue, as Sandra Schwedler, chairperson of German second division side St. Pauli’s supervisory board, explains.

Exhibition organizer Wurbs has also been confronted with her gender in her role at FSE, whether it be unsolicited requests to reveal a hotel room number or patronizing remarks following a presentation such as: "Yes, yes, and you look very nice."

"Particularly at some of the biggest institutions in football, I would be quizzed about my football knowledge," she says. "I wonder if my male colleagues would have been asked the same questions."

In organizing the Fan.Tastic Females exhibition, Wurbs has experienced first hand just how important female role models are in football – not just on the pitch, where the Bundesliga has its first female referee in Bibiana Steinhaus, but also in the media, in the form of female commentators and pundits, and in the stands.

"The representation of women in football in the media needs to be more critical and get away from the idea of sexual objects," Wurbs says. "The image of the young, slim, classically sexy woman simply doesn't reflect the average female fan. That's one of the aims of the exhibition: to represent the reality on the terraces."

That reality means highlighting some of the practical barriers female fans face on any given matchday. From the number of female security checks at the turnstiles, to the availability of toilets, to female points of contact within the stadium, women's concerns are too frequently neglected. 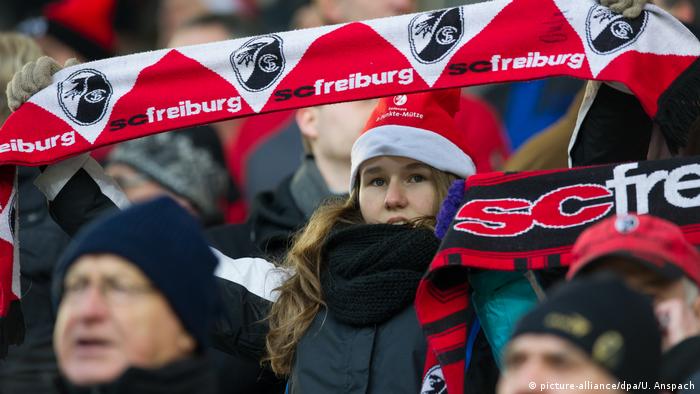 The Fan.Tastic Females exhibition aims to tell women's stories from the terraces

‘Don't make such a fuss'

In November, a Schalke supporter made headlines after she complained she had been sexually harassed at the Veltins Arena in Gelsenkirchen. After reporting the incident to a steward, she was allegedly told to stay at home and watch on television if she couldn’t handle it.

On the other side of the Ruhr region, Anna Horstmann of Ballspiel.Vereint, the Borussia Dortmund anti-discrimination initiative that hosted the Fan.Tastic Females exhibition in December, says the scenario is all too familiar.

"There is often a lack of understanding when you approach a steward and you often get the usual response of 'don't make such a fuss'," she told DW. "A lot of women would like to have a contact point inside the stadium where they can report such behavior and be taken seriously."

Stewards and security personnel at Bundesliga clubs are trained to recognize neo-Nazi or extreme-right symbols and chants, but Horstmann would like to see greater awareness of sexism, too. A BVB season ticket holder, she insists that she feels safe and at home on the club's famous Yellow Wall but says there are still aspects of a matchday which she could do without.

"I'd rather not hear songs about whores or c***s or other terms which denigrate femininity," she explains. "There's still such a strong masculine ideal in football with traits that are important for male fans: strength, loyalty, pride. Football is seen as the last bastion of masculinity, so anything that doesn’t fit that view is denigrated as gay or feminine.

"It's great to see that racist insults are now practically non-existent, but not when they're replaced by homophobia and sexism!" 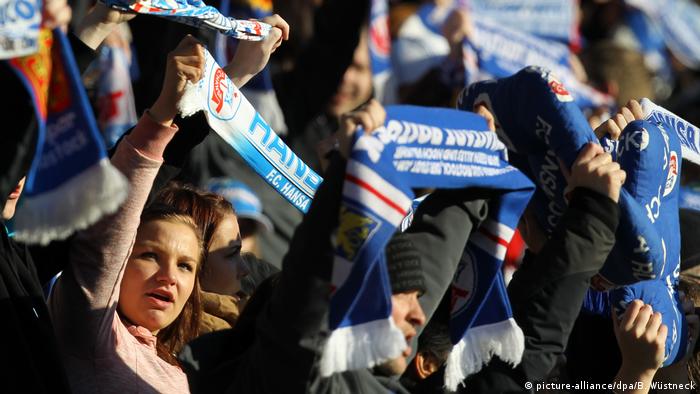 What can men do?

While racism is now considered unacceptable and taboo by the vast majority, the subject of sexism in football can still be interpreted by male fans as a direct attack. Suddenly, one's own throwaway comments, chants and behavior on a Saturday afternoon come in for scrutiny.

"When someone says they are against racism, it's easy to say you're against it too because it generally doesn't mean questioning your own position," says Horstmann. "But as soon as someone says they're against sexism, then people have to reflect on themselves. It's a difficult subject to discuss."

Fan.Tastic Females aims to highlight these issues but the solutions can't be found by women alone. Organizer Daniela Wurbs believes that men also have a responsibility to actively make room for female fans and ask themselves questions.

"What can be done to make women feel at home at the match? What could they change about their own behavior? It doesn't mean that the entire fan culture has to change," she says.

"The women we interviewed love going to football because there's an atmosphere in which you can let yourself go a bit. It's easier to shout around and have a drink at the football than in other areas of life. That’s where the best stories come from and it's precisely those stories that we want to tell."

At her own club, significant progress has already been made. An estimated 30-35 per cent of fans at St. Pauli home games are female and women and girls are readily accepted within the club’s leading ultra group, Ultra Sankt Pauli (USP). So it's not surprising that St. Pauli became the first club to host the exhibition back in September.

"The interest is huge," Wurbs says. "We’ve been on cloud nine since the launch. We've had requests from all over Germany and Europe. We never imagined how big it would get."

As for Dresden, no date has yet been confirmed, but some St. Pauli fans are already planning a response to the distasteful banner displayed in December. From female capos, to the distribution of aprons to an all-female away end – various suggestions have been made ahead of the return fixture between the two sides in May.

Visit www.fan-tastic-females.org for more information and 2019 tour dates (in English).

The exhibition in Dortmund was hosted by Ballspiel.Vereint, a Borussia Dortmund anti-discrimination fan initiative (in German).