Fan protests against Dietmar Hopp: A story of broken trust

Fan representatives trying to de-escalate the situation between supporters and German football’s governing bodies have strongly criticized the DFB for its handling of the case and its comparisons with discrimination. 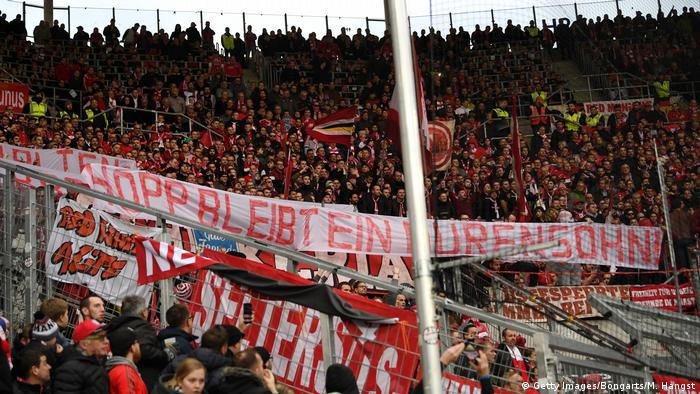 Last weekend's Germany-wide fan protests against Dietmar Hopp and collective punishments resulted in many club heads coming out in defence of the Hoffenheim owner, criticizing Germany's fan and ultra group which took part.

Many expected the protests to intensify during Bayern Munich's German Cup quarterfinal away at Schalke, but this was not the case. While Schalke's fans held a number of banners protesting against their own club's handling of the protest, as well as against the DFB ("a football association with dementia: forget your promises about collective punishments, and then blackmail us fans with matches being abandoned!"), there were no protests in the away end.

The latest statement issued by Bayern Munich's most well-known ultra group, Schickeria, could offer a reason to why Bayern supporters did not protest in Gelsenkirchen. While the group heavily criticized Bayern CEO Karl-Heinz Rummenigge's quotes about them, they also pointed out some positives about their club's handling of the case.

The group said it sees it in a positive light that the club hasn't made any "hasty" announcements about sanctions against Bayern Munich's ultras. "Apparently, people at the club are still interested in dialogue, which we welcome and for which we are ready at any time," reads the announcement.

Another reason for optimism could be a scheduled meeting between fan representatives and Germany's football association (DFB) and football league (DFL). However, the supporter associations involved have already voiced their displeasure at the DFB, due to what they see as yet another breach in trust on the side of German football's governing body. 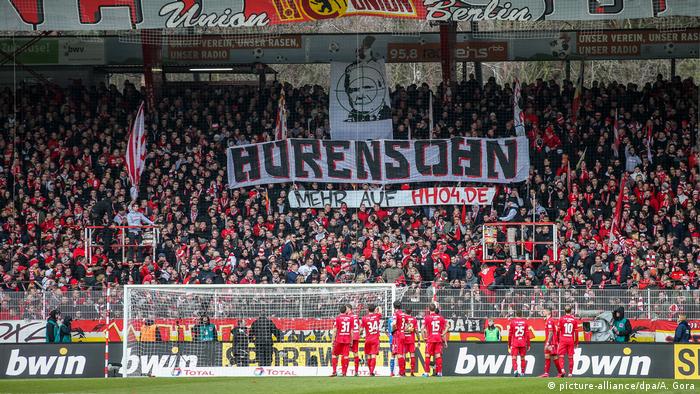 This protest at Union Berlin was one of several against Hoffenheim owner Dietmar Hopp.

"Unsere Kurve," the largest advocacy group for active football fans in Germany, have so far taken a level-headed approach to the conflict between the DFB and the fans. This changed on Tuesday, as the group released a statement using untypically strong language about the way the crisis has been handled by Germany's football association.

In the statement, issued together with QFF, the association of LGBT fan clubs in Germany, the group outlines how it searched for dialogue with the DFB and the DFL using a designated working group established by all sides to come into dialogue between fan representatives, clubs, the DFB and DFL and the Fanprojekte, the network of social workers that come in contact with young football fans, with a view of supporting democratic values and combat discriminatory tendencies. The working group is known as AG Fankulturen.

'We will be the last to talk to you!'

According to Unsere Kurve, as soon as it was clear the protests against Hopp and against collective punishments would result in escalation, it turned to the DFB and DFL asking for an urgent AG Fankulturen meeting, with the associations agreeing right away. Unsere Kurve then wanted to make the information public, but the associations asked to keep it behind closed doors for now, "in order for the expectations not to be high," according to the statement.

Then, despite their initial request, the DFB's own website quoted president Fritz Keller as saying discussions between all sides are set to take place, with a view of setting an agreed "red line" when it comes to fan protests.

"In doing so, the DFB is trying to take over the responsibility for coming into dialogue, as well as its content," said the group, adding that such moves by the DFB "do not make a good basis" for de-escalating the situation.

According to their statement, Unsere Kurve will not be taking part in any discussions about setting red lines, as portrayed by DFB President Keller. "The meeting isn't supposed to calm down the protests, but to explore ways to de-escalate the situation. We did it because, unlike those responsible, we still love football," said the statement, adding that despite the broken trust between both sides, it will still take part in the scheduled meeting. "We see dialogue as the only solution going forward," the statement reads.

Unsere Kurve took to its Facebook page to post the statement, adding the title: "We will be the last to talk to you, we will not let you take us for idiots!"

The reason behind the strong language was the worry that the DFB would take the credit for the dialogue taking place, when it were the fan representatives who called for discussions in a bid to deescalate the situation, sources told DW.

In addition to exposing the meeting taking place, DFB president Fritz Keller said that Germany's association can no longer ignore "discrimination and personalized threats." Keller was not the only one mentioning the protests against Hopp in the context of structural forms of discrimination. Bayern Munich star Thomas Müller took to his Twitter account to call for "hate campaigns, racism, antisemitism, homophobia and all other forms of hate" to be stamped out of football. Hopp himself said that the protests against him "remind of darker times."

Schickeria and Unsere Kurve are known to be at the forefront of the fight against discrimination in German footbal, a fight which was largely led by both Germany's left-wing ultra groups and the educational fan projects, and which led to many discriminatory chants and symbols disappearing from German football's top stadiums in the last 30 years. Both groups have used their recent statements to criticize such comparisons in strong terms. 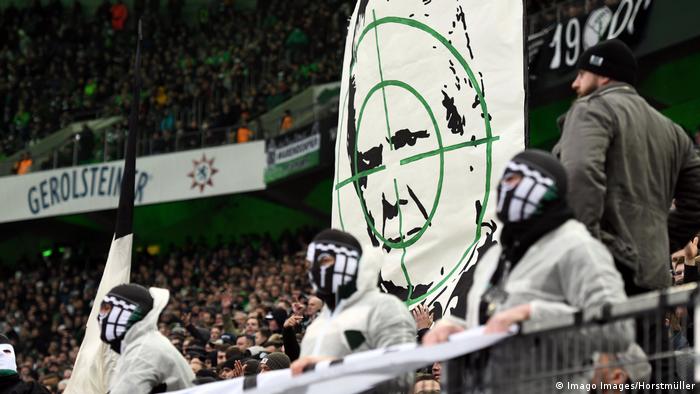 This banner at Borussia Mönchengladbach sparked the recent wave of anti-Hopp protests.

Germany's educational fan projects voiced similar views. In a statement released by the working group for Germany's fan projects, the social workers and educational experts working with young football fans across Germany labelled such comparisons as "fatal" and said they "would lead into a dead end."

The DFB took to Twitter to apologize to Unsere Kurve. "We made a mistake, both by publishing the meeting taking place and in our formulation," their reply read. "We're looking forward to the discussion."

Fan groups against discrimination under pressure

With fan experts warning that the fight between fan groups of different political affiliations is currently taking place in many of Germany's cities, a crackdown on fan groups who take an active stance against discrimination, such as Bayern Munich's Schickeria, could lead to their position in the terraces being weakened.

Should such groups be banned by clubs altogether, the void created in Germany's stadiums could be filled by other well-organized groups. Given German society's shift to the right, there's no guarantees that those groups will hold the same views.

DW contacted the DFB for comment but received no response until the article's publication.