Fact check: Children used as a propaganda tool in the Israel-Gaza crisis | Middle East | News and analysis of events in the Arab world | DW | 18.05.2021 A Palestinian child in Gaza in October 2014

After a major attack or natural catastrophe, people scramble to share images and videos on social media. Many often say they are photos of their loved ones, claiming they've gone missing or are mourning their death after the tragedy. In total, at least 63 Palestinian children have been killed according to the Palestinian health ministry. In Israel, two children were killed since the crisis escalated, according to Unicef.

However, it is also a scheme too often used by either attention seekers wanting clicks with the use of popular hashtags, or by people trying to spread false information about an event.

In the case of ongoing conflicts and wars like the Syrian civil war or the Kashmir conflict, as well as the Israel-Gaza crisis now, social media is often also flooded with such posts and tweets that turn out to be fake. Images of children, who are said to have been injured or killed during attacks, are often used to garner attention for one side.

Sometimes these images are from either a different time period or from a completely different place — and are used in a manipulative way to get more sympathy for a cause. In other instances, real photos are used within a false context to support a wrong theory. And there are even cases where authentic images and videos are shared claiming that they have been doctored, although it is not the case.

This image shows a little girl called Malek who was allegedly killed by an Israeli strike in Gaza. It was used for numerous tweets in different languages. But in fact, with a simple reverse image search, DW could find out that it shows the now 5-year-old Sophie from Russia.

The picture had been posted by her mother on Instagram two years ago. And the latest posts in her account prove that the girl is still alive and having fun with her mom in Moscow Zoo. 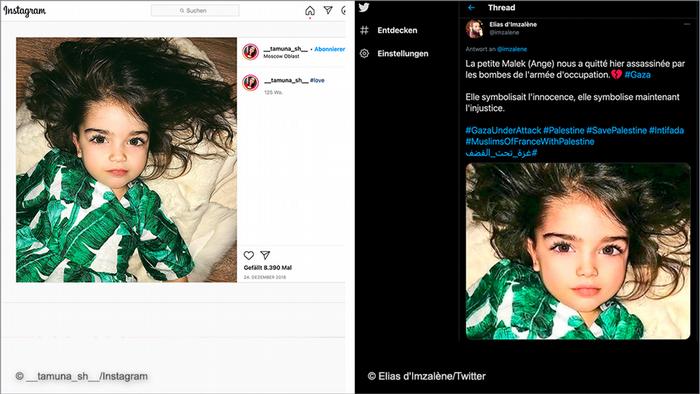 A tweet falsely claimed to show a girl killed in Gaza

A photo of a crying girl holding her books tight has been retweeted many times recently aiming to show "the amount of pain" with what is now happening in Gaza.

However, the origin of the photo is not quite clear. Palestinian photographer Fadi Abdullah Thabet claims to have shot it in northern Gaza back in 2014.

Since then, the picture has been used as the face of the conflict whenever the violence escalates. At the same time, it emerges on social media in connection with the terror attacks on schoolchildren in Kabul, Afghanistan, but also for illustrating stories from Idlib, Syria.

Another picture actively used in the last days to show "the life of Palestinian children” is this one showing a boy standing in between debris and rubble of destroyed buildings. In this case, the image does show a Palestinian child and the surrounding has not been manipulated, however, the image is from October 19, 2014, according to Getty Images.

According to the news agency the Palestinian boy is walking through the Shejaiya neighborhood of Gaza City destroyed during the 50-day conflict between Israel and Hamas.

Since then, this very picture has been wrongly used by some media outlets and on social media to illustrate the airstrikes in Syria.

Images from other conflicts

The exact opposite has also been happening. When looking for social media content on the current crisis in Gaza and Israel, DW found that several images of children used to illustrate the current situation were actually from a few years ago as well as from Syria. They are often merged as photo-collages, and therefore less easy to identify as manipulations.

Among them is a picture of a boy holding his baby sister saved from under the rubble after an airstrike in Masaken Hanano in Aleppo on February 14, 2014.

Another one is showing an injured Syrian child waiting for treatment at a makeshift hospital after the airstrikes by government forces in the Damascus suburb of Douma. This picture was shot by the award-winning freelance photographer and paramedic Abd Doumany on October 29, 2015.

In the photo collage, there is also a picture of the Palestinian father crying over the body of his dead child. According to Getty Images, it was taken by Mohammed Abed at a hospital morgue in the northern Gaza Strip on May 10, 2021. The agency points out "nine people were killed amid air raids in the Gaza Strip, local authorities said, but it was not clear whether the fatalities were caused by Israeli strikes."

Used together with the photos from Syria, the photo of the hospital morgue in Gaza is overshadowed by the misleading instrumentalization of the victims involved in other conflicts.

Old and misleading videos presented out of context

DW also analyzed a widely shared video that claims Palestinians — including children — are using makeup to fake injuries caused by Israeli attacks for a news report.

In this case, the video is real but it is being presented out of context and with a false claim. In the original 2-minute video from 2017  we learn that the Palestinian makeup artists were working on a project led by the French charity Doctors of the World.

The video has been shared with similar false claims since 2017. And has also been used in disinformation campaigns in the Syrian civil war.

Similar to the widely shared video of makeup artists, there are also real, unaltered images that are shared with the claim that they are "Pallywood productions." Pallywood is a derogatory term used in publications, on the internet, and on social media for images and videos that are said to have been staged by Palestinians in order to present Israel in a bad light.

In this tweet, the claim is made that the image is staged by the photographer. According to this user and others commenting on the tweet, they claim the bassinet is not covered in dust or damaged enough to have belonged to the original setting. This photograph can be traced back to photographer Samar Abu Elouf for the New York Times on May 16.

An almost exact wording was used in this tweet to support the claim that the image has been staged for anti-Israel propaganda purposes. The origin of this image can also be traced back to the New York Timesand was published first on May 16.

Similarly, this tweet also claims that the images are doctored and staged. It goes even further, using the term "Pallywood" and claiming — without any evidence — that an entire industry exists to stage fake images for propaganda purposes.

People in both Israel and Gaza have used images of children in propaganda warfare for a long time. With the omnipresence of social media, images are often shared and spread further without first checking its origin — and whether or not it has been manipulated. This leads to a flood of images that sees hatred and misunderstanding flare up and even devolve into violence.