Facing VW cuts, Wolfsburg are a timely reminder of the value of 50+1

VfL Wolfsburg could suffer greatly from the effects of the Volkswagen emissions scandal. For German football, it's a timely reminder of the risks taken by corporate-owned clubs. 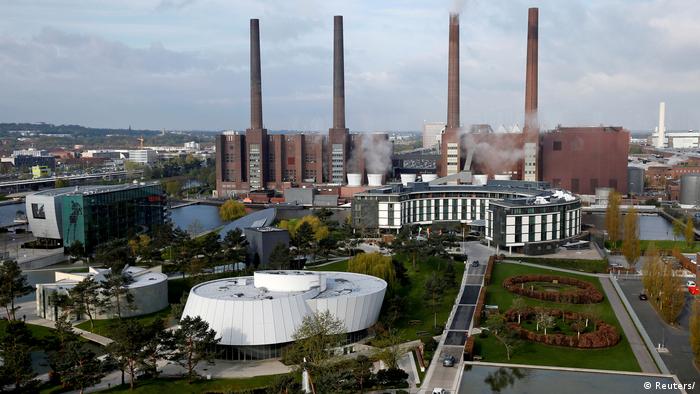 VfL Wolfsburg have lost three of their last five Bundesliga games since new head coach Valerien Ismael took over from Dieter Hecking in October, and their match in Ingolstadt on Saturday could have made it four, had it not been for the heroics of goalkeeper Diego Benaglio.

Over an hour had elapsed in Bavaria before Wolfsburg created their first genuine chance of the match, courtesy of 19-year-old substitute and Real Madrid loanee Borja Mayoral. Before that, the Wolves' expensively assembled attack - featuring German internationals Mario Gomez and Julian Draxler - had failed to muster a single effort on goal against a team who had only won their first match the previous week. 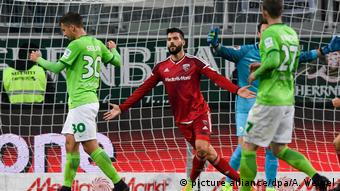 Wolfsburg were lucky to leave Ingolstadt with a draw

Ten points from 12 games. Two points above the relegation zone. The figures don't make for pleasant reading but sporting director Klaus Aloffs insists that the aim of a further nine points from the club's final four games before Christmas is still attainable. A glance at a fixture list which reads: Hertha BSC (h), Bayern Munich (a), Eintracht Frankfurt (h), and Borussia Mönchengladbach (a) suggests otherwise.

And unfortunately for fans in Wolfsburg, there's no escape from the current plight of their football team outside of the stadium either. In the Autostadt in Lower Saxony, car manufacturer Volkswagen is omnipresent.

"Volkswagen, Wolfsburg and our football club are one - the three are inextricably linked and they grow together," said Marco, a Wolfsburg fan and Volkswagen employee, when I visited the city last season.

"The city exists for Volkswagen and so does the football club - yes, we are a works team."

Over half of the population of Wolfsburg works either directly or indirectly for Volkswagen, who also own 100% of VfL Wolfsburg - an exception to Germany football's 50 percent + 1 ownership rule achieved due the longevity of the firm's financial support for the club.

But after news broke last year that the company had breached US car emissions laws, Volkswagen was forced to recall millions of vehicles and is facing fines which could potentially amount to billions of dollars.

With the parent company in trouble, the football club has been among the first to suffer. Plans for a new 40-million-euro ($42.3 million) youth academy were scrapped soon after the scandal broke, and much of the proceeds from the sales of Kevin De Bruyne (80 million euros to Manchester City) and Ivan Perisic (20 million euros to Inter Milan) are thought to have gone straight to Volkswagen. 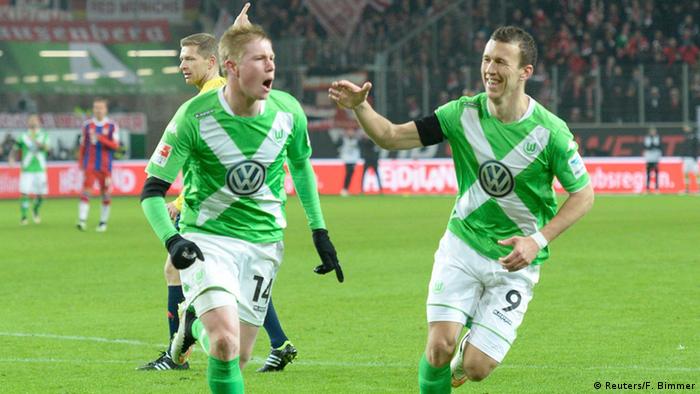 Happier times in Wolfsburg: When Kevin Debruyne and Ivan Perisic were still wearing the green and white

The "Wolfsburger Allgemeine" has reported that the company is set to cut up to 30,000 jobs worldwide in the next few years and it has already signaled its intention to cut back its sporting portfolio by announcing its withdrawal from the World Rally Championship.

VfL Wolfsburg have so far refused to comment on speculation in the German media that their operating budget  - said to amount to around 100 million euros a season - is set to be cut by 30 percent.

"We will have to see where Volkswagen's aims lie," Allofs said on German television last week. "Is it simply about the existence of a football club in Wolfsburg or is it about challenging for the top of the league?"

The Wolves have invested significant amounts in the transfer market in recent years in an effort to guarantee Champions League football, although a poor start to the current campaign has already cost Dieter Hecking his job. 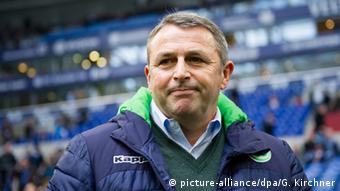 "No decisions have yet been made," reiterated Allofs on Friday regarding the club's financial situation, but one thing is clear - if Volkswagen withdraw their funding as expected, Wolfsburg will be forced into a drastic rethink of their transfer strategy. No more big wages, no more big names, no Champions League.

For supporters in Wolfsburg however, many of whose working lives revolve around Volkswagen, there may be a silver lining, as Marco explained.

"I don't think it would be a bad thing if we couldn't afford expensive players and instead concentrated more on our own youngsters," he said. "We'd probably end up in mid-table for a while but it wouldn't stop us loving our club."

Given the identity of the Bundesliga's current leaders, the entwined fate of Volkswagen and Wolfsburg is a timely reminder of the nature of corporate-owned football clubs and the value of the 50+1 rule for German football.

RB Leipzig have brought top-flight football back to Leipzig for the first time since 1994 and they are contributing to the one of the most intriguing Bundesliga seasons in years.

But while there is currently no suggestion that Red Bull are likely to encounter any financial difficulties in the near future, Wolfsburg's current predicament demonstrates quite explicitly where a parent company's priorities lie when the going gets tough - and it's not on the football pitch.