Extreme weather: ′Africa is most vulnerable′ | Environment | All topics from climate change to conservation | DW | 13.04.2018

Extreme weather: 'Africa is most vulnerable'

Education and fighting poverty are key to combatting the effects of extreme weather, says Joseph Mukabana, Director of the Office for Africa and Least Developed Countries at the World Meteorological Organization. 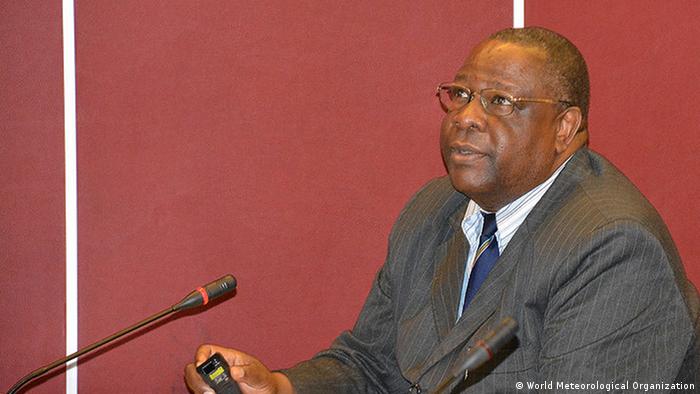 The World Meteorological Organization (WMO) is the UN's specialist agency dealing with weather, climate and water. Kenyan scientist Joseph Mukabana leads the WMO's Office for Africa and Least Developed Countries. He is responsible for coordinating the work of national meteorological services around the continent of Africa in order to improve weather and climate forecasting. He tells DW how extreme weather is affecting African countries.

DW: What is Africa experiencing in terms of extreme weather?

Joseph Mukabana: Extreme weather is increasing all over the world due to global warming. But Africa is the most vulnerable of all the continents. Because of poverty, some parts of Africa cannot cope with hazardous weather that causes a lot of loss and damage.

East Africa has experienced a lot of droughts — for example, there was a recent drought in Ethiopia, and the government had to step in and mobilize resources to save lives. Last year, Sierra Leone and Liberia were hit by flash floods and mudslides in which hundreds of people died.

These are hazards which are happening and they happen now with more intensity than previously because of climate change.

How can we define extreme weather?

Extreme weather is a question of averages. For example, Nairobi used to have temperatures of 22-25 degrees Celsius (71 to 77 degrees Fahrenheit) all year round: a good, temperate climate. But these days, you have temperatures shooting up to 30 degrees. In terms of rainfall, you can define it by saying, generally this place gets 20 millimeters of rain, but this time it got 50, so that is extreme. It's a question of what's above average. That goes for temperature, rainfall, humidity, wind, everything.

So we have the heatwave on one side, and the cold chill on the other — they make the physiology of the body feel uncomfortable, and we would then describe the temperature as extreme.

How much research on climate change and extreme weather in Africa is carried out in Africa itself?

Right now there's a concerted effort to increase climate research in Africa. In the past, observational data has been a problem: most of it was left rotting in national weather services. But the WMO is now leading an effort to rescue this climate data and bring it to research institutions and universities so that they can research the climatology of the African region and how weather patterns have evolved.

We hear a lot about how Africa pays a heavy price for climate change which is caused by industrial nations. How do you approach that issue among your international colleagues?

When you are arguing in such areas, you need evidence and validation. We use data on climate change and the impact it is having on various areas — on the economy, on the people, and on the environment.

Africa has the African group of negotiators who attend COP (Conference of the Parties) meetings. Under the Kyoto protocol [a 1997 international treaty on global warming], there was a principle called the 'polluter pays principle' — if you pollute, you pay. So the African group of negotiators normally appeals to developed countries which are more responsible for global warming to come up with programs to help Africa adapt to the adverse impact of climate change.

What should African governments be doing to combat extreme weather?

African governments need to come up with adaptation initiatives. Every country now has what we call NAPs — national adaptation plans.

For example, there's an NAP for reforestation. You will find some places in Africa where the rivers have run dry because the forests on the surrounding mountains have been cut down. But the moment you replant the forests, you find the streams filling with water and flowing again.

The government can also advise people, for example, not to settle in floodplains, and bring in rules —  like not tilling the soil right up to the river, in order to guard against erosion.

There's also encouragement in the use of solar and wind energy which is cheap in Africa if it is well-harnessed — and it's better than producing thermal power, which releases carbon dioxide.

So there are adaptive measures and mechanisms, which do not pollute but protect the environment. Because if we destroy the planet, we destroy ourselves. We are the destroyers. Without us, the earth would regenerate itself.

What can we do to prepare for extreme weather?

The key is education in order to understand what's happening. Sometimes people do things because they don't know the consequences. It's also important to fight poverty. When people are poor, sometimes they cut down trees for fuel, and they don't realize they are destroying the environment. So we need to educate people on how to conserve the environment.

We also need to strengthen the infrastructure of the national meteorological and hydrological services, so they can give us early warnings for severe weather and climate events. If you are forewarned, you can take some measures to protect yourself.

In developed countries, where the early warning systems are very good and the forecasting is good, the loss of life decreases. People are advised to evacuate, so although infrastructure can be lost, at least human life is spared.

Educating people so they understand early warning systems is also key. Some people ignore warnings and they get in harm's way. But if they are educated, they follow the advice. So we need to come up with systematic outreach programs to educate the public on how to deal with weather and climate disasters.

With predictions that Cape Town could run out of water in only a few months, residents are already facing tough restrictions. DW looks at how people are managing. (25.01.2018)