Farmers and lobby groups are split on an EU agricultural reform that may increase farmers' incomes and consumers' prices. A DW joint report reveals a rift between farmers and the groups purporting to represent them. 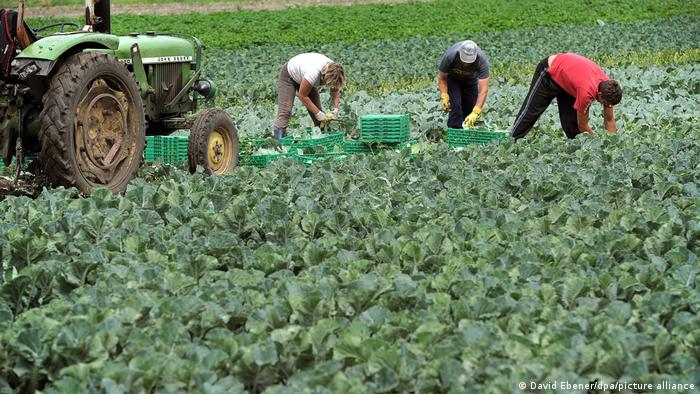 An EU proposal has called for a more sustainable agriculture policy, but who will benefit from it most?

It is a long way from the farms and fields of Sezze in central Italy to the halls of the European Parliament in Strasbourg. But the decisions made at the European assembly this week can directly impact the lives of farmers like Valentina Pallavicino. Her farm southeast of Rome is the kind that is often cited by policymakers and lobbyists when seeking support for changes to Europe's complex, subsidy-heavy agricultural system.

Pallavicino, like most Europeans, does not follow every twist and turn of farming reform debated by politicians in Brussels and Strasbourg, but she does discern two central aspects of the agricultural landscape with clarity: cheap food has been a boon for big, industrial farms and many farmers support sustainable farming.

"What they ask for we already do," she says when presented with some of the key elements of a new "green" strategy for the future of European farming, known as "Farm to Fork," which aims to slash pesticide and antimicrobial use, set a threshold on food waste, and rely on renewable energy to create a sustainable food system. "We don't use antibiotics, preservatives, or chemicals," she added. 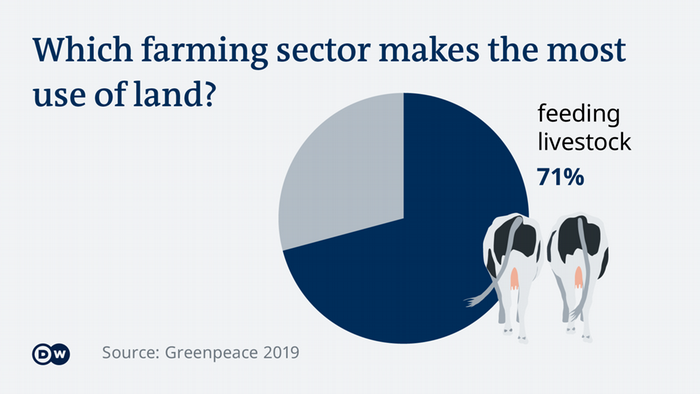 Pallavicino says she is also wary of the organized lobby organizations claiming to speak in her name. It seems obvious, she says, that the big players do not like this kind of policy because it will increase costs and "they win if prices are lower."

Although they have never met, Polish dairy farmer Alina Lis has reached the same conclusions at her 30-hectare (74-acre) farm in western Poland, where she rears 40 cows.

"I believe agriculture in Europe should be sustainable for the sake of nature and food security," Lis says.

Lis has seen the margins on her milk fall as she competes with intensive farms that rely on heavy use of chemical fertilizers and antibiotics.

The battle over who represents the true voice and interests of farmers like Pallavicino and Lis, and the millions of Europeans they feed, reaches a climax this week as the European Parliament prepares for a vote on a radical new direction for farming in the EU. Any changes the legislative body introduces require approval from EU member states before taking effect.

Farmers will receive support from the Common Agricultural Policy (CAP) budget, the EU's huge farming subsidy program that has paid out more than €50 billion ($58 billion) every year since 2005. Of the funding,  80% goes to 20% of the biggest farms in the EU. 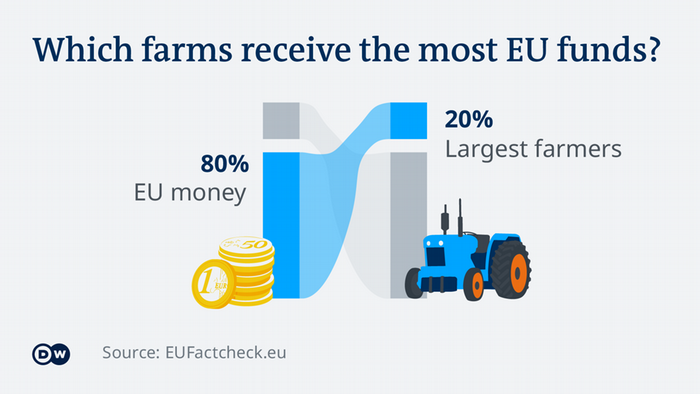 Proponents of the Farm to Fork strategy, including green groups, say it will reduce farming's share of planet-warming greenhouse gas emissions while keeping food affordable. An assessment by the Commission's in-house scientists found the strategy could support farmers and cut agriculture-related emissions by 20% across the EU.

Yet, it has come under fire from the powerful agribusiness lobby that says the proposal is not scientifically viable, will push up prices for consumers and goes against the interests of EU farmers.

Documents reviewed by DW showed these groups want to get rid of specific targets for reducing the use of pesticides and fertilizers, references to health risks associated with intensive farming, requirements to increase transparency by labeling products, and the ability of member states to impose higher taxes on unsustainable products.

But the same interest groups have also been accused of abusing science, skewing media coverage and failing the farmers they claim to represent.

What emerges is a portrait of wealthy industrial pressure groups — from petrochemical companies and multinational meat-packing giants to pharmaceutical businesses — that have a stubborn hold over EU policy as well as critical differences with the family farmers whose welfare they say they aim to defend.

A rift has emerged within the farming community, between those who want to continue expanding an industrial farming model, which experts say is damaging the environment, and others who prefer a smaller-scale, more ecologically friendly form of agriculture. 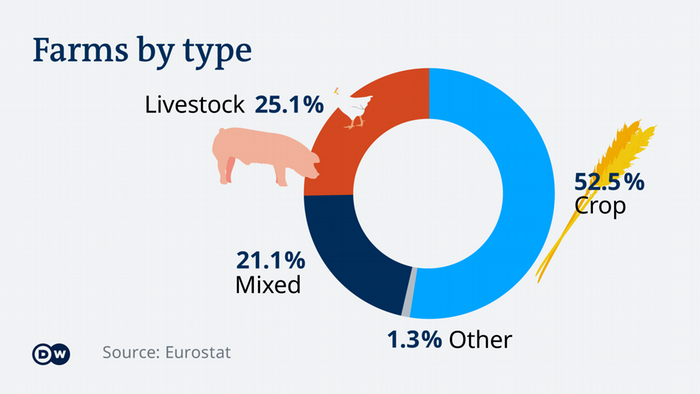 How is EU agricultural money spent?

Most independent farmers say they welcome the price increases that would result from focusing on the environmental costs of agriculture and fair trade practices. Many also say the big lobby groups do not speak for them.

"I do not feel represented by farmer lobby groups... small farms in Poland are collapsing," said Lis.

Marcin Wojcik, who owns a 270-hectare farm in the Low Beskid mountains in Poland, agreed.

"For two years, I was vice-president of Narodowy Fundusz Promocji Mięsa Wołowego, but I resigned because I didn't relate to those people and what they do," he says. "It was more of politics. It was unclear where the money was going." 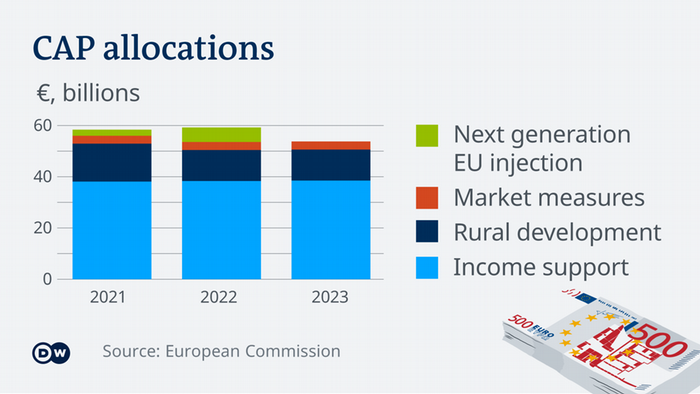 Farm to Fork a 'win-win for total society'

A study financed by the Grain Club, an alliance of German grain companies, and carried out by the University of Kiel, shows implementing the Farm to Fork plan would cause Europe's agricultural production to decrease, prices to rise and the EU to become more dependent on imports.

Copa-Cogeca has used the study to criticize the Farm to Fork strategy without mentioning that the report also shows the income and welfare of farmers, especially livestock farmers, could be significantly improved.

The study's author, scientist Christian Henning, pointed this out in an interview with DW: "The green deal is potentially a win-win situation for total society as the benefits more than compensate for losses from reduced conventional farm production."

The green deal Henning refers to is a set of proposals adopted by the European Commission on July 14 to ensure the EU's climate, energy, transport and taxation policies reduce net greenhouse gas emissions by at least 55% by 2030, compared to 1990 levels. Farm to Fork is "at the heart" of the Green Deal, the Commission has said, adding that farming is responsible for 10% of the EU's greenhouse gas emissions.

Farming in Italy is at a crossroads

Another publication commissioned by CropLife, which lobbies on behalf of pesticide manufacturers and other players in the agri-food industry, and used by Copa-Cogeca, comes from the Netherlands' Wageningen University. It concludes that if Farm to Fork is implemented, prices will rise and meat production will fall by 10% to 15% and crop production by 10% to 20%.

Jean-Baptiste Boucher, Copa-Cogeca's communications director, told DW such studies showed "many blind spots" of Farm to Fork and accused NGOs of "a deliberate attempt to trigger a media backlash" for speaking out against the strategy.

However, the research did not address "the positive impact of the Farm to Fork strategy on climate change," the proposal's main objective, admitted Johan Bremmer, an author of the Wageningen report.

Paid for Farm to Fork disinformation?

In the span of two days, the Wageningen report was presented at a conference on the media platform Euractiv, which produced sponsored content articles critical of the Farm to Fork initiative, and at a special event organized by pro-meat group European Livestock Voice.

CropLife paid for the Euractiv event. A scan of the platform's website showed that of the seven events organized by Euractiv with "Farm to Fork" in the title over the past two years, six were sponsored by the agri-food industry.

Chris Powers, communications director of Euractiv, says that while the organization was paid to host the events, Euractiv values impartial, inclusive and constructive debates.

Small-scale farmers left in the dark

The sustained campaign against Farm to Fork has confused small-scale farmers who were already struggling to stay profitable and are unsure whether to welcome all the proposed measures.

Dutch dairy farmer Peter Gille says low margins have made it difficult for many farmers like himself to secure their future. He has set up side businesses, including a nursery, a camping site and a restaurant, to supplement his income.

Susan Malhieu, a 29-year-old dairy farmer in Ypres, Belgium, said while some of the strategy's policies will work, environmentally friendly farming will cost money.

"I am a bit concerned this has not been addressed very well in Farm to Fork," she said. "I am fine with having environmental targets ... but to meet the targets, will the monetary help be delivered?"

"We need to make people understand that they might be spending those extra two euros but buying a product that is healthy for themselves and for the environment. In this way, the price increase can be digested."

Celine VanKerschaver, 29, international representative for Grone King, the organization for young farmers in Belgium, said Farm to Fork could help the EU achieve more coherence within the food chain and improve the social and environmental aspects of farming. But politicians should listen to farmers, not just lobbies, she says.

"We want more recognition for young farmers because they are the next generation," she says. "There is a lot of talking about farmers but not with farmers."