Explosions rip through Russian ammunition depot for second time | News and current affairs from Germany and around the world | DW | 09.08.2019

The new blasts come just days after deadly explosions tore through the same military facility in Siberia. Russia's Defense Ministry has said lightning was the cause of Friday's explosions and fire. 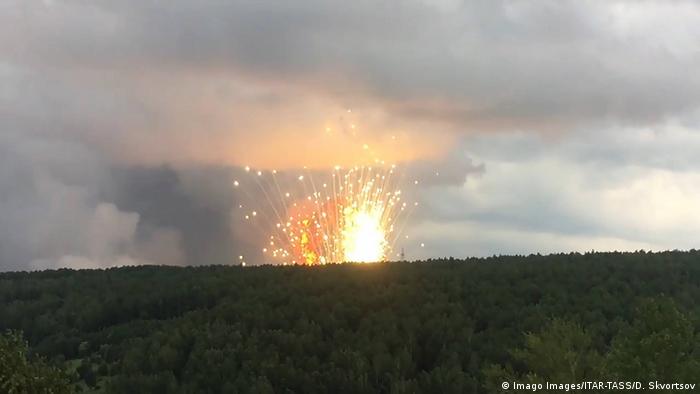 Two new explosions ripped through an ammunition depot at a Russian military facility in eastern Siberia on Friday, injuring eight people, according to state-run news agency TASS.  A fire also broke out at the storage depot, located near the city of Achinsk.

TASS reported that the Russian Defense Ministry said lightning was the cause of the explosion and that the nearby village of Kamenka was being evacuated.

The incident comes four days after deadly explosions and a subsequent fire swept through the same ammo facility, forcing thousands of nearby residents to evacuate.

One person was killed and 13 others injured during Monday’s explosions, according to local reports. Russia’s Defense Ministry on Tuesday said "human error" was a possible cause for the explosions.

The deadly explosion is the second within a week at a Russian military site. There are conflicting reports about a short-term spike in radiation around the base. (08.08.2019)

Raging wildfires have swallowed up an area across Siberia bigger than Belgium, with smoke enveloping cities. Observers and activists slammed the Russian government for not responding earlier. (31.07.2019)

Russian officals say 3,000 people were forced from their homes following mutliple explosions at an ammunitions depot in Crimea. Moscow has called it an act of sabotage without naming the perpetrators.