Thousands of locals have been moved to safety after the blast at an ammunition warehouse. Authorities have declared a state of emergency in the Siberian Krasnoyarsk region. 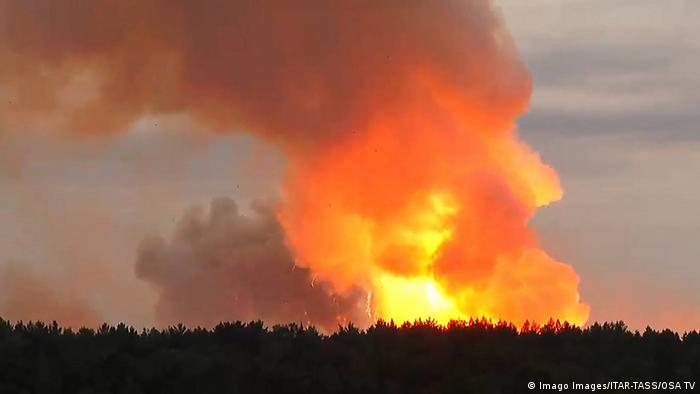 Russia's Defense Ministry said on Monday that explosions at a storage facility for gunpowder charges prompted the evacuation of 6,000 residents in the town of Achinsk, as well as towns and villages within a 20-kilometer (12.4-mile) radius.

Authorities declared a state of emergency in the Krasnoyarsk region.

Air traffic was suspended within 30 kilometers of the military site.

Krasnoyarsk governor Alexander Uss said that between five and eight people may have been injured.

"There is no threat to their lives," he added in televised comments.

Rusal, the world's largest aluminum producer outside China, suspended operations at its Achinsk alumina plant and evacuated all but essential staff to ensure their safety, it said.

The plant is Russia's largest producer of alumina, a raw material which is smelted into aluminum.

Around a dozen accidents have happened in explosives factories across Russia since 2014, according to the TASS news agency.

More than 80 people were injured and two more were missing after explosions and a fire at an explosives plant in Dzerzhinsk. The cause of the blasts that shattered windows in the city of 230,000 was not clear. (01.06.2019)

The city was recently retaken by Ukraine from Russian forces. Ukrainian President Volodymyr Zelenskyy said more information would be given on Friday.