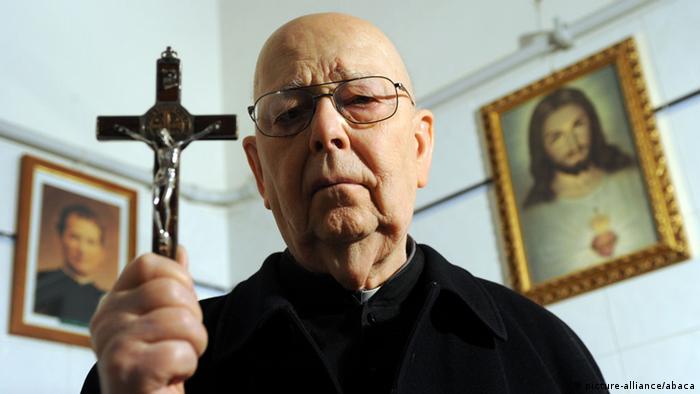 Father Gabriele Amorth's publisher, the San Paolo Group, said Saturday the Italian priest died on Friday at the Santa Lucia Foundation clinic in Rome. He had been admitted in the rehabilitation center some weeks ago "for lung problems."

The Foundation said Amorth had suffered from various respiratory and circulatory complications.

The priest made headlines over the years for suggesting that Stalin, Hitler and the "Islamic State" (IS) jihadis were possessed by the devil. He also condemned yoga, eastern spirituality, the Harry Porter books and movies and television as satanic.

"If one thinks of what was committed by people like Stalin or Hitler, certainly they were possessed by the devil. This is seen in their actions, in their behavior and in the horrors they committed," Amorth told Vatican Radio in 2006.

Last year in April, he wrote on his Facebook page, L'ultimo esorcista, that IS was Satan. "As a Christian, I fight the beast spiritually. Politicians, who today seem to have no response to the massacre of Christians, will also have to fight ISIS and it will do it in a different way."

As for the fictional character Harry Potter, the late priest had this to say: "People think it is just a children's book, but it leads to magic, and therefore to evil."

Amorth was also against homosexuality. Three years ago, he told Italy's Radio 24 that anyone who acted against "the law of God" were "not necessarily possessed, but are acting under the guidance of the devil."

Born in the northern Italian city of Modena in 1925, Father Amorth fought against the Fascists during World War II.

"I am convinced that the Nazis were all possessed by the devil," he said in an interview, arguing that the devil could posses groups of people.

The late priest was ordained in 1951 but did not become an exorcist until the mid-1980s.

In 1990, Amorth founded the International Association of Exorcists, which he led until 2000. In 2014, the Vatican officially recognized the association.

Amorth reportedly conducted over 70,000 exorcisms during his career.

Catholic Church officials in Poland have given their blessing to a new exorcism center. It's expected to get quite a few visitors from across the border in Germany, where the topic has long been taboo. (22.01.2008)

Indian-born novelist Salman Rushdie, who has lived under death threats due to his writing, has been stabbed on stage during a literary event. He suffered a wound to the neck and was rushed to hospital.

After the US decided to blacklist Paraguay's Vice President Hugo Velazquez, the politician said he would offer his resignation to his party and retire from the presidential race.