A Syrian woman who drowned while crossing the Mediterranean has been buried by activists in Berlin. The group had exhumed her body for the reburial to draw attention to the plight of migrants. 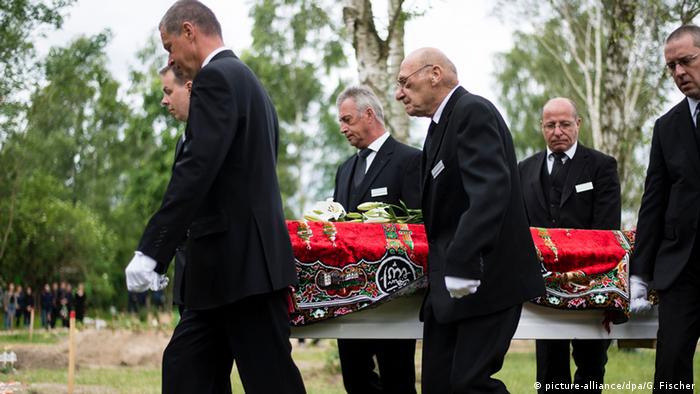 The first of a series of funerals carried out by activists for migrants who drowned earlier this year while attempting to cross the Mediterranean from Africa to Europe took place in Berlin on Tuesday.

Led by the organization Center for Political Beauty, which blends political activism and art, Tuesday's funeral was for a Syrian woman who had died in March. According to the organization's website, the burial took place in the Muslim part of Berlin's Gatow Cemetery.

The activists are hoping to "tear down the walls surrounding Europe's sense of compassion" when it came to migrants who die attempting to come to Europe. They say cemeteries are too full in countries such as Italy and Greece to give the dead proper burials.

In the case of the woman buried Tuesday, the organization said "together with the victims' relatives, we opened inhumane graves and exhumed the bodies" in Italy so they could be moved to Germany for burial.

A spokesperson for the group, Philipp Ruch, was quoted by the dpa news agency as saying the woman's widower and three surviving children were in Germany awaiting asylum, but could not attend the funeral because of the provisions of their application for asylum.

At the burial, Tweets from the organization showed an Imam present as well as several empty seats with place cards for, among other political figures, German Chancellor Angela Merkel. The group sees Germany as the driver of European policy on how to handle the influx of refugees seeking to enter the EU.

The Tweet reads, "First funeral in the heart of Europe. No person deserves to be buried and forgotten at the end of their life."

'The Dead are Coming'

A fundraiser on the crowdfunding platform Indiegogo under the name "The Dead are Coming" (Die Toten kommen) has so far raised over 37,000 euros from around 1,300 people. The group's page on the fundraising site said the money is to be put toward transporting the bodies to Germany and paying for the funerals.

Ruch said on the group's Indiegogo page that a total of 10 "inhumane" graves had been opened and the bodies exhumed.

"They are now on the way to Germany," he said. The website added that the victims' families had decided the next steps.

The Center for Political Beauty has said it plans on conducting additional funerals around Berlin this week, but will not make the exact location of each funeral known until 6 hours before it takes place due to the "explosive nature of the intervention."

On Sunday, the group has planned a "March of the Determined," which will see demonstrators "accompany the victims to the Federal Chancellery and lay the foundations for an unprecedented burial ground." A mock-up of the demonstration in front of the Chancellery shows rows and rows of graves under an arch that reads: "To the unknown immigrants."

The group's website said the march "will be headed by several excavators equipped with demolition hammers in order to transform the Chancellery's forecourt into a Memorial for the victims of Europe's military isolation."

Green Party parliamentarian Volker Beck said in the left-wing taz newspaper on Tuesday that "making dead refugees the subject of an art campaign is disconcerting and impious."

The Center for Political Beauty is known for its provocative actions: Four years ago, the activists piled up a mountain of over 16,000 shoes in front of Berlin's Brandenburg Gate, in an effort to highlight UN failings in 1995 when Serbian forces massacred more than 8,000 Muslim men and boys at Srebrenica in Bosnia.

In November on the eve of the 25th anniversary of the fall of the Berlin Wall, the group claimed responsibility for the theft of crosses commemorating escapees who died while trying to flee former East Germany.