The memos reveal conversations between Trump and Comey on the Russia probe, prostitutes and jailing journalists. The papers are expected to play a key role in an investigation into Russian influence in the 2016 election. 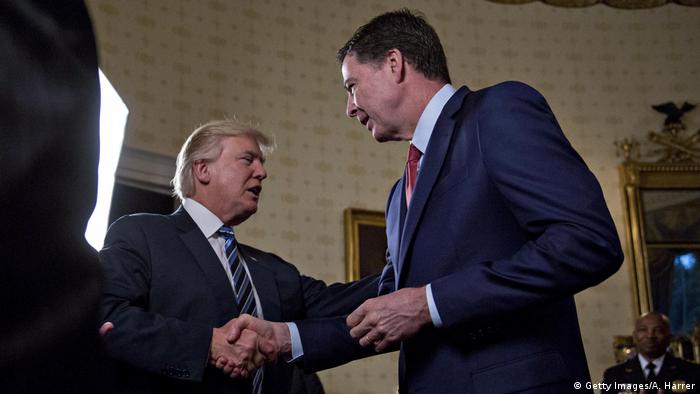 The release of the documents has been highly anticipated since their existence was made public last year, as they are believed to be critical to special counsel Robert Mueller's  investigation into whether the Trump tried to interfere with a probe into potential collusion between his campaign team and Russia in the 2016 US elections.

Read more: Why the question of how James Comey understood Donald Trump is so crucial

Key points from the memos

According to the memos Comey says Trump told him:

Trump said on Twitter that Comey's memos showed there was no collusion with Russia and no obstruction of justice, adding that Comey had leaked classified information.

The three suggested the memos "would be Defense Exhibit A" if Trump were charged with obstruction of justice.

Read more: What you need to know about the five inquiries looking into Donald Trump, James Comey and Russia

Who is James Comey? Comey was the former director of the FBI. He was fired in May 2017 while he was leading an investigation into possible Russian intereference in the 2016 US presidential election.

Who is Michael Flynn? Flynn is Trump's former national security advisor who was fired in February 2017 after White House officials said he misled them about his Russian contacts because he said that he had not discussed sanctions. He has pleaded guilty to misleading the FBI on Russia conversations and is now cooperating with investigators.

Why are the Comey-Trump memos important? The memos detail three months of conversations between Comey and Trump from before the former FB director was fired. They are thought to be key in special counsel Robert Mueller's probe into Russian involvement in the 2016 election, and collusion between Trump and Russia.

In an interview with ABC News, former FBI Director James Comey has said that US President Donald Trump is "morally unfit" to be president. Trump advisor Kellyanne Conway accused Comey of sinking into the "gutter." (16.04.2018)

Ex-FBI chief James Comey in his new book has blasted Donald Trump as a mobster-like figure who is "untethered to the truth." Tweeting back, the president said Comey was a "slime ball" who should be prosecuted for leaks. (13.04.2018)

Donald Trump: I did not record Comey chats on Russia scandal

Despite previously hinting otherwise, US President Donald Trump has said he did not record talks with his ousted FBI director. Trump is facing an ongoing crisis over his campaign's possible collusion with Russia. (22.06.2017)