A brace from Vincenzo Grifo led surprise package Freiburg to a 3-2 win over Wolfsburg and kept them within touching distance of the Champions League spots. Grifo is excelling in his second spell in his "second home." 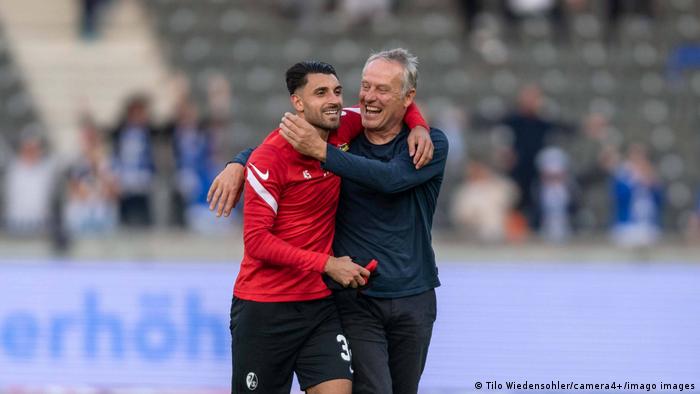 With seven moves in seven years, it would be easy to perceive Vincenzo Grifo as a Bundesliga journeyman. Look a little deeper though and return stints with Hoffenheim and now Freiburg hint at a player whose environment is important to his form.

"We all feel very comfortable," he told DW in an interview. "It's a great atmosphere and we enjoy it very much: our fans, the city, everyone loves Freiburg. And everyone who lives here really supports us. When they see you in the city they are all very friendly and really support you...the characters are very, very good, so you can work really well here."

Grifo originally joined the Black Forest club in 2015 from Hoffenheim and helped them win promotion back to the top flight with 14 goals and 15 assists in 31 league appearances. The next season saw Freiburg finish seventh in the Bundesliga and qualify for the Europa League.

But the 28-year-old would not be part of the club's fourth ever European campaign after his vision, set-piece ability and eye for goal convinced Borussia Mönchengladbach to pay about €6 million ($6.7m) for his signature in May 2017.

Neither that move, nor a brief return to Hoffenheim worked out, though Grifo did manage to play in the Champions League and make his international debut for Italy (the home of his parents) during his time in Sinsheim. None of it wasn't quite right though.

"I need the atmosphere, I need the closeness, the boys, the coaching team knows me [at Freiburg]," he added. "And I know myself. The most important thing is simply that I can continue to develop here and that I want to become an even better player.

"There's also the role of the coach, the coaching team and the boys, of course, who give me a lot of strength and support and who make me feel at home."

That coach, Christian Streich is one of several links to Grifo's first spell at the club, having been retained despite Freiburg's relegation the season before Grifo arrived. Streich is entering his eleventh year in charge at a club with a difference. Freiburg's picturesque surroundings, environmental credentials, university and the down-to-earth, principled nature of Streich and his team have made them admired as much for their sporting culture as their continued ability to punch above their weight on the pitch. 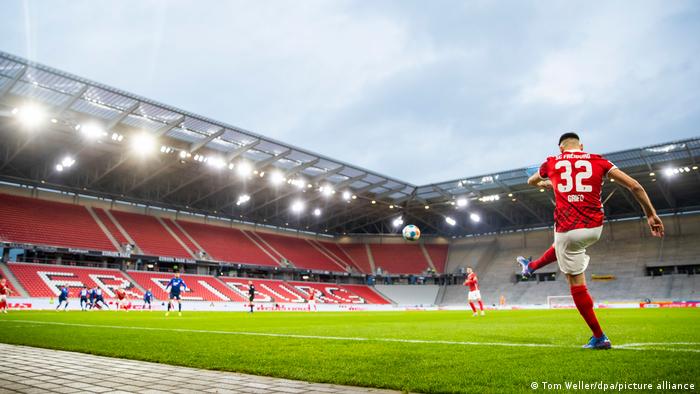 Grifo's set piece delivery is a key weapon for Freiburg

"We have an extraordinary coach who is very hungry, who has of course been a coach in the Bundesliga for a long time, for ten years, and just knows how to deal with the players," Grifo said.

"He is someone who simply always wants to make every player better, no matter how old, whether they are 19, 28 or 30, who always wants to get the maximum out of you. He also leads the way and he sets a good example, so us guys just want to get the best out of ourselves."

Grifo has certainly managed to find something close to his best form this season, racking up 10 goals and seven assists in 30 appearances as Freiburg have remained in contention for the Champions League and made the semifinals of an open German Cup. His latest two strikes, a trademark freekick and a brilliant volley against Wolfsburg on Saturday, ensured Freiburg have won 10 points from the last four games.

He also contributed to some eye-catching wins earlier in the season, including a trademark freekick to open the scoring in a 2-1 win over Borussia Dortmund and a pair of assists in a stunning 6-0 win over Gladbach in December.

A first-half nightmare for Gladbach

While fellow underdogs Union Berlin have fallen away a touch, Freiburg remain very much in the hunt for European places. Grifo said he's "hungry" for Freiburg's overachievement to continue but doesn't think now is the time to dream of European football, or indeed a possible recall to the Italy squad for the World Cup in Qatar.

"The most important thing is simply to concentrate on Freiburg and to do your homework here. Then maybe to take the chance to go to the World Cup with it," said the German-born midfielder, who opted to represent the European champions on the international stage.

"But as I said, I'm totally concentrating on the task, trying to perform well. I'm on a good path there. But of course I'll be happy if they want to call me up."

While Italy may be the land of his parents, and Germany the country of his birth, there's no doubt that it's Freiburg where Vincenzo Grifo currently feels most at home.