The EU's diplomatic chief has reportedly called for Iran's cooperation in resolving the conflict in Syria during an official visit to Tehran. She will fly on to Saudi Arabia for talks with Iran's regional rival. 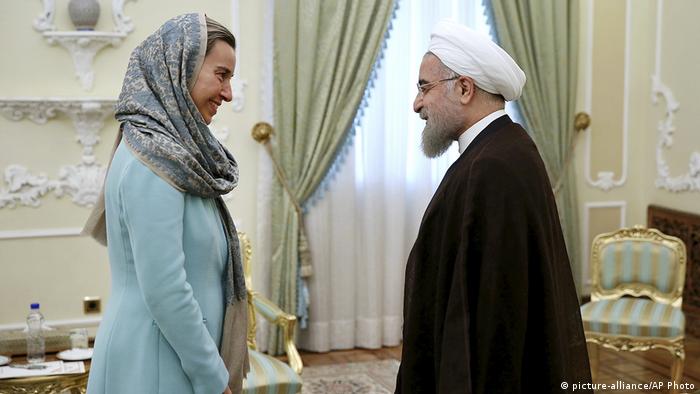 Federica Mogherini told local Iranian media on Saturday that the EU "needed the cooperation of Iran, a key power, to solve the region's problems."

Referring to the Syrian rebel forces, Rouhani warned against the threat of "terrorist governments"  seizing power in the Middle East and North Africa.

"The terrorist actions in Syria and Iraq are a serious threat to the world. If there is not a serious battle against terrorism in the region, we will see several terrorist governments and entities," Rouhani was quoted of saying on the presidency's website. He also called on the EU to pull back support for the rebel groups in Syria.

Mogherini's diplomatic tour of the Middle East comes just a day after Syrian rebels launched a major offensive aimed at taking control of military-held districts in the northern city of Aleppo. The same day, foreign ministers from Syria, Russia and Iran held talks in Moscow on the Aleppo siege.

Later on Saturday, Mogherini will hold talks with officials in Saudi Arabia, a major arms provider to several Syrian groups fighting the Assad regime. Saudi Arabia is also Iran's regional rival, with each country taking opposite sides in the Syria conflict.

Rouhani called out Saudi Arabia for its support of the anti-Assad rebel forces, insisting that Syria's territorial integrity must be preserved and that its "future will be assured only by the Syrians' vote."

A meeting of the US, Russia and seven regional states has failed to reach an agreement on Syria. As the devastating conflict rages on, international actors involved agreed to more talks despite "different approaches." (15.10.2016)