Eurozone's new 5-euro note: Coming to a wallet near you

The eurozone's revamped 5-euro bank note is ready to enter circulation when banks reopen on Thursday. It's meant to be more durable and harder to forge. If you visit infrequently, fear not, old "fivers" remain valid. 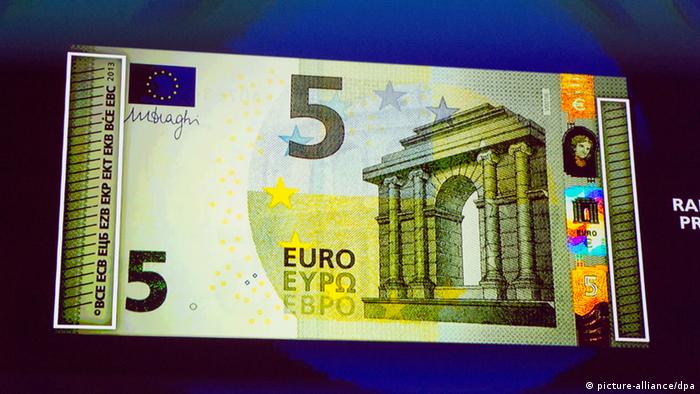 The 17 countries using the euro are set to start ushering in a second generation of bank notes, over 11 years after the single currency went into circulation in cash form.

Starting at the bottom of the range, the 5-euro ($6.50) note is the first to get a facelift, with the new tender entering circulation around the Continent on Thursday. Millions of the new notes have been distributed to various banks in readiness. The color is changing: from an emerald green to a bluer hue. The note was first unveiled in January.

Currency experts have been working on the second-generation papers ever since 2005. One of the primary objectives is to make the currency more difficult to forge - although the European Central Bank and its national offshoots are also keen to stress that this is a precautionary measure for notes that are already very difficult to imitate.

In 2012, the German Bundesbank central bank registered just over 41,500 forged bank notes, prompting board member Carl-Ludwig Thiele to say, "from a statistical standpoint, the average German citizen would touch counterfeit currency just once every 2,000 years."

Latvia is getting ready to introduce the euro in January 2014, but politicians worry about little support for the single currency. Only 30 percent of Latvians want to switch from lats and santims to euros and cents. (21.01.2013)

Planned for use on the entire new range of notes, a hologram strip and watermark bearing an image of the Greek mythical figure Europa is designed to make the currency more difficult to imitate.

The Bundesbank has also said that the outgoing 5-euro note will retain its value as legal tender "without a time limit," meaning that they could be exchanged even after the currently unspecified expiry date.

The most noticeable change is the note's specialized lacquered coating. As the smallest paper denomination, the 5-euro note circulates most freely, and thus has the shortest life expectancy. Estimates suggest that the average 5-euro note stays in circulation for less than a year before needing replacement. A typical 20-euro note is thought to last about two years, while a 50-euro note might survive for four years.

A new 10-euro note is currently scheduled for release next year, with its 20-euro counterpart set to follow in 2015.