Austria wins the Eurovision Song Contest for the first time in nearly 50 years. The recipe for success? A bearded cabaret artist with the alias Conchita Wurst, who can stop audiences in their tracks with her voice. 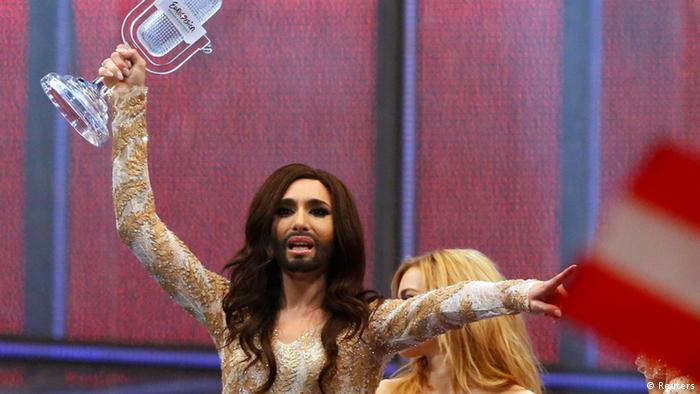 Conchita Wurst became the star of this year's Eurovision Song Contest in Copenhagen long before the semi-finals had even gotten underway. No other artist took the spotlight quite like Tom Neuwirth, the man who plays Conchita on stage.

Plenty of fans are wondering now: Just how did Conchita do it? Was it her unusual appearance alone or more thanks to the strength of her performance of the powerful and almost autobiographical ballad "Rise Like a Phoenix"?

Picking up points in the East

Perhaps German presenter Barbara Schöneberger was right when she once quipped that Eurovision is a mix of a gay pride parade and Catholics' World Youth Day. Conchita managed to rake in support from every corner of Europe. Even Russia, where homosexual "propaganda" is now illegal, gave her five points, compared with just one point to Azerbaijan, with which it has close ties.

That generosity toward Conchita didn't save Russia, which came in at a respectable 7th, from being booed repeatedly as points were tallied up. A country has never been punished in quite this fashion for its current political atmosphere in the history of Eurovision.

Of course, a woman with a full beard being cheered on euphorically by much of Europe is also a novelty. Many journalists and fans were counting on a good finish for the new "Queen of Austria," as some have taken to calling Conchita. No one was predicting such a decisive win, though. Whether her victory will do anything to contribute to tolerance around the continent remains to be seen. Germany's long-time Eurovision commentator Peter Urban claimed during the broadcast that Europe is already more tolerant than some people think.

ESC expert and journalist Jan Feddersen takes a different view, telling DW ahead of the finale in Copenhagen, "In 1998, the transsexual Israeli Dana International won in Birmingham. Everyone thought afterwards that her win represented a victory as a symbol of queerness."

On that point, Feddersen remains unconvinced. 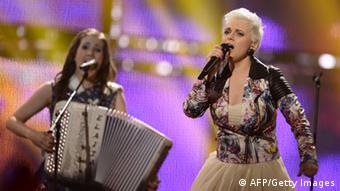 Despite a lackluster ESC finish, Elaiza have had many successes in 2014

Germany's female trio Elaiza came out just a little better among national juries and audiences than the bookies had predicted. Bookmakers were expecting them to occupy one of the last slots. For many viewers at home, Elaiza's finish in 18th place out of 26 competitors probably seems about as bad as Germany's entry last year with Cascada, who finished in 21st.

Elaiza frontwoman Ela Steinmetz was visibly nervous. If she had been able to bring out more of her friendly charm on stage, a few more points might have come their way. Regardless, the German ARD broadcasting network's ESC commentator, Thomas Schreiber, was right in saying: "Elaiza is a national success story."

After all, the musicians in Elaiza have made it from being virtually unknown two months ago to having gone gold with their tune, "Is It Right?" Just as with Germany's winning entrant, Lena, in 2010, ESC fans in the country were behind Elaiza. It was thanks solely to their votes in a televised competition that the neo-folk trio got their ticket to Denmark to represent Germany. 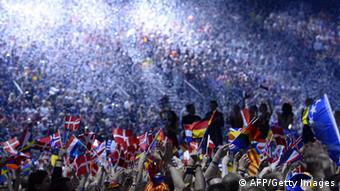 Aiming for a perfect broadcast

The Eurovision Song Contest in Copenhagen showed once again that contest host, the European Broadcast Union (EBU), continues to pursue the strategy of delivering a perfect television broadcast. As a result, the ESC becomes less of an event for the winning country or for the residents of a given city - and more of a TV event.

This year, the organizers - the European Broadcasting Union and Danish broadcasters - set their sights on drawing in 180 million viewers for the two semi-finals and the finale. It wasn't just in Europe that people could watch the finale live, but also in Australia and, for the first time, in New Zealand.

For the second consecutive year, the competition wasn't held in a stadium or major concert hall, as it had been in Düsseldorf in 2011 or a year later in Baku. Instead, the Danish hosts converted a dockyard facility in which ships were once built into a massive television studio with seats for 10,000 viewers. The entire wall behind the angular stage was an LED screen. An elaborate steel construction behind the stage allowed for every conceivable projection and light effect.

For the first time, the floor on which the artists performed was also turned into a TV screen, making the shots from overhead particularly spectacular. When the Netherlands' second-place finishers, The Common Linnets, performed, viewers felt as if they were standing in the middle of a highway, and Poland's Donatan & Cleo swept the audience through a flowery meadow.

The fact that this state-of-the-art TV studio actually stands in the middle of a desolate industrial district is likely of little consequence to television viewers. 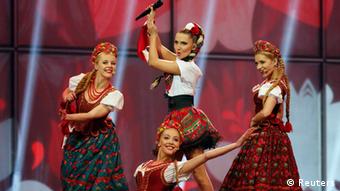 Not just a freak show

There are sure to be some objections to Saturday's show - from feminists, perhaps, to the bosomy extras in Poland's performance - but the event was no freak show, even though more than a few critics like to dismiss it as such.

This time, the more or less strange entries were filtered out during the semi-finals. More than a handful of the colorful competitors that made it to the finale took on serious topics, treating them with levity.

The song "No Prejudice" by Iceland's Pollapönk discusses getting rid of bigotry not only in all of its forms, but against stutterers in particular. And France's Twin Twin, with their seeming party song "Moustache," actually deliver satire targeting a consumerist society that is never satisfied with what it has and always wants more.

For the second year in a row, the EBU decided not to establish the exact order in which the participants would appear, instead specifying simply in which half of the show the contestants would perform. That resulted in a nice mix of slow and fast, creative and more conventional numbers.

Even in its calls to various countries for their point totals, the EBU tried to make the order such that things stayed exciting right to the end. The show's organizers are familiar with national juries' results, since these come in after the dress rehearsal. Juries' votes account for 50 percent of the contestants' total scores. This time, once the results really begun rolling in, Conchita's victory was about as glaring as her beard.

Drag queen Conchita Wurst won the Eurovision Song Contest - the victory for Austria in the competition for almost 50 years. But it is also a victory for all of Europe, says DW's Nadja Scholz. (12.05.2014)

Denmark's ups and downs at Eurovision

The 2014 Eurovision host, Denmark, has had a bumpy ride through the contest's past, but has been on an up-swing in recent years. In the international pop scene, it still lags behind some of its Scandinavian neighbors. (08.05.2014)

Eurovision in the shadow of the Ukraine crisis

Russia's intervention in Ukraine is going to be on many Eurovision fans' minds as they take in the competition this May. But if Russia loses out in 2014, it may have little to do with the political turmoil. (02.05.2014)