European space science is in for a big year - if all things go to plan - starting with the "wake up" of Rosetta. European Space Agency Director General Jean-Jacques Dordain tells DW there's nothing to do but wait. 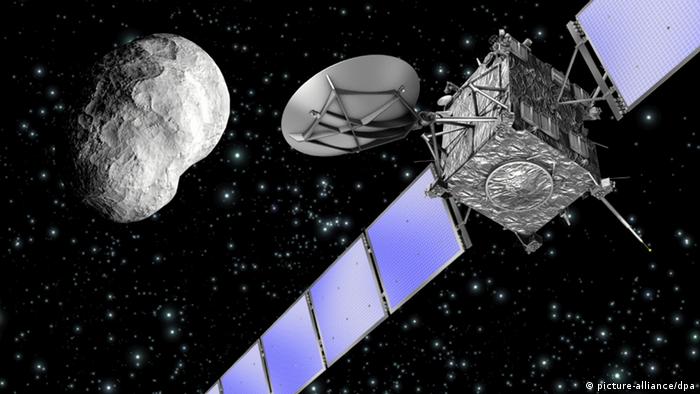 DW: This is going to be a big year for the European Space Agency. You've got a lot riding on Rosetta and Galileo, Europe's in-development global positioning system. Focusing on Rosetta, its mission was already canceled once at great expense, and even now you say you can't influence the process of its waking up from deep hibernation on Monday (20.01.2014). You must be nervous?

Jean-Jacques Dordain: I am nervous, yes. And I'd like it to be Monday already ... Rosetta has been sleeping for 30 months, it's a sleeping beauty. And she will wake up alone because we cannot send a prince to wake her up. So she has to wake up alone, and as long as we have not received signals that she has awoken... Yes, I am nervous!

For those of us who can't imagine the plan of Rosetta's waking up, and further down the track of its placing a lander on a comet, how is this going to work?

We have worked a lot to make it work. It is a unique mission. Nobody has done this before. This is a unique piece of technology. It's a unique scientific spacecraft. Rosetta was launched 10 years ago and it's made a long trip in the solar system. But now she's closer to the comet [67P/Churyumov-Gerasimenko], which is its final destination. She is still 6 million kilometers away as we speak [on Friday].

But she will wake up this month, and during this year we will get closer and closer to the comet, chasing the comet. The landing point is November 11. Rosetta will separate from the lander, Philae, which, by the way, was produced by the German Aerospace Center (DLR), and then it will be four hours before Philae reaches the surface of the comet and will dock to the comet. We call it a lander but because the gravity is so low it has to dock. And that's when we will start the scientific part of the mission. 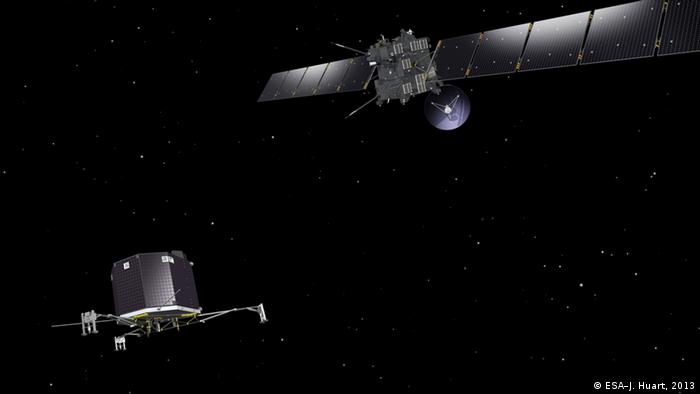 The way you put it, it sounds so easy. A lander simply docks to a comet, while they're traveling at such incredible speeds. What if it fails? Surely that would be quite embarrassing for ESA?

Absolutely. But, again, nobody has done this before. A comet and a spacecraft making a rendezvous at very high speeds, and they have to be at the same place at the same moment, and when Philae is at the surface, it will have to "harpoon" the surface to make sure it stays attached, and that will also be very difficult. But we have worked a lot over the years to make this successful. And now there's very little that we can do. This is why 2014 will be a very big year, waiting for Philae to land on the comet.

Coming at this from scientific perspective, we hope to learn a lot about the beginnings of our universe and of life. But from an economic point of view, is this something that Europe can afford - or must afford - at this time?

I think that improving knowledge has no price. By improving our knowledge, we improve our knowledge of planet Earth and of life. It's not the comet which is interesting. What is interesting is planet Earth and life. But they don't come out of the blue, Earth and life come from the origin of the universe, which includes the comets. So we'll learn about comets, their composition and how they behave, because we shall accompany the comet for almost a year. And to make this progress in knowledge we have to progress in technology, and technological breakthroughs are a factor of competitiveness for European industry. By improving knowledge, by improving the competitiveness of industry, you are improving the economic situation of Europe. We shouldn't measure the economic value just by the cost of the mission itself.

How does the European Space Agency see itself positioned in the world when other countries, such as China, are openly saying that they are searching in space for rare minerals, which are very important for the new technologies upon which we all rely? Can Europe afford to not be looking for rare minerals too? Or is it keeping that a secret? 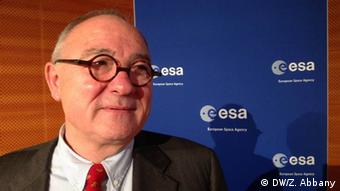 Well, we should be doing this. Given that the member states of ESA have increased their contributions to space at a time of economic crisis, it's a fantastic demonstration that they consider investing in space the same as investing in the economy and innovation, growth and employment. You need knowledge, you need technology and you need services. Rosetta is knowledge and technology. And Galileo is a service to the citizens. But there are also technologies in Galileo that are two times better than the current GPS, so we will have a clear advantage in terms of technology and services.

I am sure that on the European side the answer is there are no secrets, just unknowns. We cooperate with the United States, Russia, Japan, and China, and there are no secrets. There is know-how ... in all of this cooperation, we have to take care to avoid technology transfer, because there are technologies in Europe which do not exist elsewhere, and that provides an advantage of competitiveness to European industry. As [German Chancellor] Angela Merkel says, if you can't be cheaper, you have to be better. And this is true. We cannot be cheaper than the Chinese or India, but we can be better. So we cooperate, but we make sure we don't transfer any knowledge which gives an advantage to Europe.

Jean-Jacques Dordain joined the European Space Agency in 1986 and has been its director general since 2003.

China is to attempt an unmanned Moon landing in the next few hours. If successful, the probe will deploy a rover vehicle to inspect the lunar landscape and make China only the third nation to make a soft landing. (14.12.2013)

I am 15! The ISS at another milestone in collaborative space science

The International Space Station (ISS) is celebrating its 15th birthday. Its first component was launched into space from Russia on November 20, 1998. Since then, it's had an incredible ride. (20.11.2013)

Amateur astronomers and space enthusiasts around the world will have plenty to look forward to in the year to come - including comet research, special Mars viewing and two full lunar eclipses. (30.12.2013)