Right-wing populists in other countries have greeted the results of a regional German election, which saw an anti-immigration, anti-EU party take 20 percent. One says it's a harbinger of a "patriotic spring." 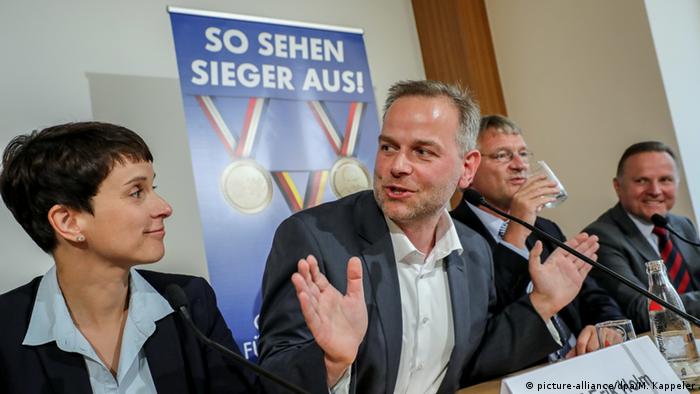 Right-wing populists across Europe cheered the strong showing of the Alternative for Germany (AfD) in an election in the German state of Mecklenburg-Western Pomerania on Sunday, September 4. In it, the AfD outpolled German Chancellor Angela Merkel's Christian Democratic Union (CDU).

"All victories of patriotic and EU-critical parties are helping freedom loving people and parties all over Europe," Geert Wilders, the founder and leader of the right-wing Party for Freedom (PVV), told DW in an email statement. "No one will be able to stop the Patriotic Spring, and the old times where the ruling political elite - like Merkel, Hollande, Rutte and others - could bypass and ignore the common people on issues such as immigration, asylum and EU-policy are definitely over. Their soon-to-come political end is the start of a new political wave of patriotism, national sovereignty and the end of cultural relativism."

France's Marine Le Pen tweeted, "What was impossible yesterday has become possible: the AfD patriots have swept away Merkel's party!" Those sentiments were echoed by leaders of anti-European Union and anti-immigration parties in Austria and Italy as well.

Can such statements be taken at face value? Does the fact that the AfD took 20.8 percent of the vote in Sunday's poll represent a victory for right-wing populists on the continent as a whole?

"Definitely," Alexander Häusler, a sociologist and expert on right-wing populism at Düsseldorf University, told DW. "The other right-wing populist parties in Europe were looking for a partner in Germany. Now with the electoral success of the AfD, they have one. A gap in the political landscape, if you will, has been closed." 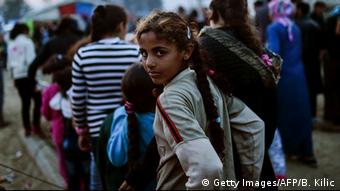 Migrants were a major issue in the Mecklenburg-Western Pomerania election

An outgrowth of social problems

Compared with Europe's other leading right-wing populist parties, the AfD was established comparatively late - in 2013. The PVV in the Netherlands has existed since 2005, for instance, and the Le Pen-led National Front goes all the way back to 1972.

In some respects, the AfD was modeled on those parties, featuring a similar uncompromising hostility toward the EU and the influx of refugees into Europe from war-torn parts of the world, like Syria or Afghanistan.

Experts say that the establishment of a right-wing populist party in Germany's political mainstream may put further wind in the sails of anti-immigration and anti-EU movements throughout Europe. The rise of the AfD, they say, is an outgrowth of problems familiar from other countries with populist parties.

"These parties profit from the current crisis in political representation," Häusler said. "They are the result of the widening gap between rich and poor and the bureaucratic mismanagement of the refugee crisis. If all European countries did their fair share to deal with the refugees, things would be better. And there needs to be more social equity - we need to see the Brexit, for instance, as a warning signal. Ordinary people are not benefiting from Europe's prosperity. We face massive challenges in terms of foreign and domestic policy."

Germany's Federal Office of Statistics says that in 2013, the most recent year for which figures are available, the uppermost ten percent of German households possessed 51.9 percent of the country's wealth - up from 45.1 percent in 2006. Germany took in more than a million refugees in 2015 - far more than any other European country.

Given the deep-seated social problems and frustrations that motivate people to vote for right-wing populist parties, it is unlikely the movement will dissipate any time soon in either Germany, or Europe as a whole. 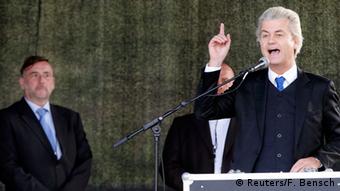 A series of decisive elections to come

Le Pen currently leads polls in France, which has a national election next year, attracting as much as 30 percent of electoral support. Having a like-minded partner in Germany can only bolster her campaign to become the next French president. Wilders will also hope for a boost ahead of the Netherlands' national vote on March 15, 2017.

So they and right-wing populist leaders in other European countries will be paying close attention to other upcoming local German elections in Berlin on September 18 and in North Rhine-Westphalia on May 14, 2017.

"The key for future developments is the elections in Germany's largest state and the one with the largest population of migrants, North Rhine-Westphalia," Häusler said. "If the AfD does well there, it will establish the party in the long term, and Germany will follow France, the Netherlands and other European countries in having a right-wing populist party in the political mainstream."

Germany itself also has a federal election coming up next year in September. That will be the ultimate measure of whether and to what extent the AfD becomes a mainstream German political force.

Analysts expect the AfD to clear the five-percent hurdle required for representation in Germany's national parliament, the Bundestag. They say that given the current political climate and poll numbers, the German political landscape will resemble those in other European nations.

"Germany is turning into a normal European country," Thorsten Brenner - policy analyst at the think tank Global Public Policy Institute in Berlin - told DW. "In all of Germany's neighbors, you have strong, right-wing populist parties in parliament. That's what's likely to happen in Germany's next federal election. The AfD is polling anywhere between 10 and 14 percent nationwide, and 60 percent of those questioned say they certainly will end up voting for the AfD, so you can expect them to enter parliament. They also don't have to do all that much for that. They just have to be anti-establishment and anti-Islam."

The success of the AfD in Mecklenburg-Western Pomerania may not be proved positive of the "patriotic spring" Wilders, Le Pen and others would like to bring about. But there's no denying that the results of Sunday's vote has right-wing populists across Europe feeling very optimistic.

Everyone knew in which direction the pendulum was going to swing. The momentum of the right-wing AfD in Mecklenburg-Western Pomerania was as predictable as the losses of the major parties, says DW's Marcel Fürstenau. (04.09.2016)