European reaction to the vote in Switzerland to the construction of new minarets has been mixed. Many leaders were critical, although some rightist parties said they wanted similar votes in their countries. 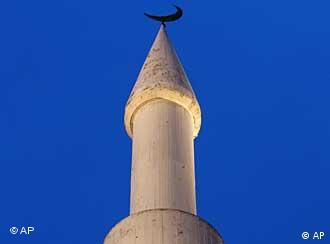 Leaders in France and Sweden condemned the results of Sunday's referendum in Switzerland that bans the construction of new minarets, calling it a regrettable sign of intolerance and prejudice.

French Foreign Minister Bernard Kouchner said the ban amounted to religious oppression and he hoped the Swiss would reverse the decision.

"I am a bit shocked by this decision," he told RTL radio. "It is an expression of intolerance and I detest intolerance." 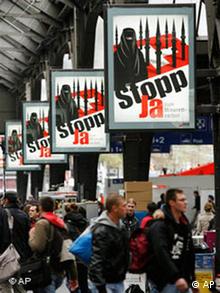 The anti-minaret campaign played on fears of Islam, observers say

Swedish Foreign Minister Carl Bildt said the result was a sign of prejudice and questioned why such a decision was put to a referendum in the first place.

"It's an expression of quite a bit of prejudice and maybe even fear, but it is clear that it is a negative signal in every way, there's no doubt about it," he told Swedish radio on Monday.

Swiss voters approved the ban on the construction of minarets by a majority of 57.5 percent, with 22 of the 26 cantons voting in favor of the prohibition. The referendum was backed by the rightist Swiss People's Party, which insisted that minarets were not architectural features with religious characteristics, but symbolized a "political-religious claim to power, which challenges fundamental rights."

In Germany, a senior member of Chancellor Angela Merkel's conservative Christian Democratic Union (CDU), said the vote showed that there is a fear of Islam in Switzerland that also exists in Germany.

Wolfgang Bosbach told the Berliner Zeitung newspaper that criticism of the referendum outcome would be counterproductive and that the fear of a growing Islamization of society "must be taken seriously." 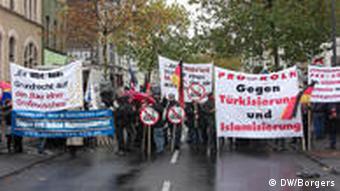 Plans for a large mosque in Cologne, Germany, unleashed protests

He told the Hamburger Abendblatt daily that he was not surprised at the vote, saying that the building of large mosques in Germany had also been met with widescale opposition form the public.

"For years I have noticed a big gap between public opinion and the authorities" on the issue, he said, recommending a open and frank debate about all mosque-building projects in Germany with the aim of reaching a compromise.

Earlier this month, the cornerstone was laid in Cologne for one of Europe's largest mosques, but only after years of controversy. Plans for the mosque drew protesters from around Germany and Europe, including right-wing extremists. One planned rally was canceled by police who feared an outbreak of violence.

To assuage public opinion, the organization behind the mosque agreed to not broadcast the call to prayer from the minarets and to keep the building's height the same as nearby structures.

Several right-wing parties and politicians across Europe, however, have praised the Swiss outcome, and some want to hold similar referendums.

French far-right politician Marine Le Pen welcomed the outcome, saying that the "elites should stop denying the aspirations and fears of the European people, who, without opposing religious freedom, reject ostentatious signs that political-religious Muslim groups want to impose." 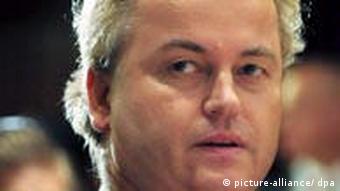 In the Netherlands, the rightist Freedom Party (PVV) said on Monday it would ask the Dutch government to hold its own a referendum banning minarets.

PVV leader Geert Wilders, who has ignited controversy for his and his party's sharp criticism of Islam and migrants, congratulated Switzerland on the "great result of the minaret referendum."

"If the (Dutch) government is unwilling to hold a referendum, the PVV will present its own bill to parliament. What is possible in Switzerland should also be popular here."

The right-wing Danish People's Party also welcomed the outcome in Switzerland. The party's leader, Pia Kjaersgaard, said her party would also call for a referendum similar to the Swiss one.

She said it was "good that you can have referendums where people are allowed to have their say."

Denmark currently has no mosques with minarets.

After years of controversy, the Muslim community in Cologne have taken the first concrete step towards building a mosque in the western German city. (07.11.2009)

Berlin's first Ahmadi mosque opened its doors in the former eastern side of the German capital last month. The building and the religious group are putting religious tolerance to the test. (29.11.2008)

The referendum result is a symptom of Swiss national insecurity

Stella Assange has accused the US of targeting a foreign journalist for exposing war crimes. Now she says her husband's life depends on his extradition order being dropped.