European parliament rejects SWIFT deal for sharing bank data with US | Europe | News and current affairs from around the continent | DW | 11.02.2010

The European Parliament has voted against a controversial deal that would have led the EU and US to share bank transfer data, something Washington has said is crucial for counter-terrorism investigations. 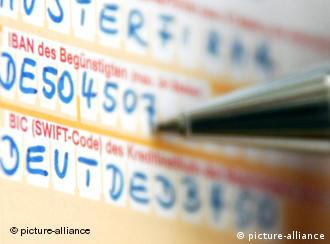 Strasbourg found the deal in breach of EU privacy laws

The European Parliament voted to reject a bank data sharing deal with the United States on Thursday. The parliamentarians resisted appeals from Washington to continue a nine-month interim agreement allowing US authorities to monitor Europeans' financial transaction data from SWIFT, an international banking transfer system.

The US says the data-sharing is for investigations into terrorist activity, but many European politicians expressed concern that it failed to protect the privacy of EU citizens.

"The majority view is that the correct balance between security, on the one hand, and the protection of civil liberties and fundamental rights, on the other, has not been achieved," European Parliament head, Jerzy Buzek, said in a statement after the vote. 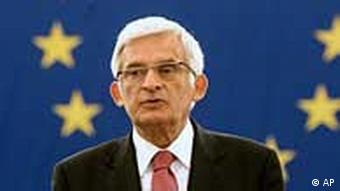 The decision was an historic moment for Parliament head Buzek

SWIFT, the Society for Worldwide Interbank Financial Telecommunication, facilitates trillions of dollars in financial transactions across the world each day.

Until recently, some of its servers were located on US soil, giving American authorities the jurisdiction needed to access the information on them. But at the end of 2009, the servers were moved to Europe.

The United States expressed its regret after the vote, calling it a "setback for EU-US counter-terror cooperation."

"This decision disrupts an important counter-terrorism program, which has resulted in more than 1,500 reports and numerous leads to European governmental authorities and has contributed significantly to collaborative counter-terrorism efforts between the United States and Europe," the US mission in Brussels said in a statement.

Before the European Parliament issued its veto on Thursday, US secretaries of state and treasury, Hillary Clinton and Timothy Geithner, had appealed to the Strasbourg institution to approve the agreement.

"Withholding consent … could jeopardize a valuable and carefully constructed counter-terrorism of importance to countries affected by terrorism around the world," Clinton and Geithner wrote in a letter to parliament chief Jerzy Buzek on Friday. 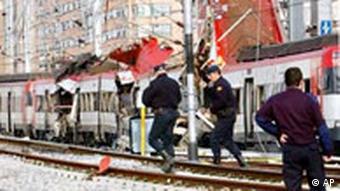 SWIFT data was used to investigate the Madrid attack

Individual governments in Europe, as well, warned that the rejection would have negative consequences for Europe.

"If we reject this agreement, I think we will all be a little less secure," said Spain's interior minister, Alfredo Perez-Rubalcaba, whose country represents the EU's rotating presidency.

Perez-Rubalcaba said SWIFT data had been used in investigations of the Madrid bombings of March 11, 2004, which killed 191 people, and that the data was integral in preventing a later attack on Barcelona.

A spokesman for the German interior ministry expressed regret over the European Parliament's decision to scrap the interim SWIFT deal, saying "a temporary data sharing agreement between the European Union and the US is better than none at all."

Germany's justice minister, meanwhile, Sabine Leutheusser- Schnarrenberger, welcomed the parliament's vote. She said the rejection of the SWIFT agreement enhanced not only data-protection in Europe, but also democracy, and was therefore a victory for all EU citizens.

The temporary agreement with the US was ratified by EU member countries in November - just one day before the European Parliament would have taken on its additional Lisbon powers.

With the Lisbon Treaty now in force, the European Parliament's rejection of the interim deal can be seen as a drive to ensure that its expanded powers are respected in practice. The Lisbon Treaty allows the parliament to decide jointly with EU governments on legal affairs, and the SWIFT vote happened to be the first opportunity for the deputies to demonstrate their new strength. 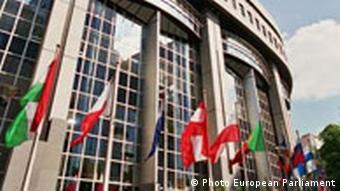 The European Parliament is adjusting to new powers

To allay the European Parliament's concerns, meanwhile, EU member states have said they will take privacy protection into greater account when forging a new agreement.

Under the agreement rejected by parliament, investigators were already forced to justify their demand for the transaction information in each case and were allowed access to data on people suspected of involvement in terrorist activities.

The EU Commission, which was in favor of the deal from the outset, is now faced with the task of re-starting negotiations with the US for a new data sharing agreement, one that completely ensures EU data protection standards.

The deal to allow US authorities continued access to international financial transaction data could be crushed under the weight of a newly strengthened European Parliament. (11.02.2010)

European Union countries have agreed on a deal that would allow the United States continued access to European citizens' financial transaction data for anti-terror investigations. (30.11.2009)

The European Union will insist on being given equal access to US data on SWIFT bank transfers when the two sides negotiate a permanent deal on information-sharing as a way of fighting terrorism. (30.07.2009)