European lawmakers have backed European Commission President Jean-Claude Juncker's proposals for coping with a massive influx of migrants. The vast majority of the people on the move have been heading for Germany. 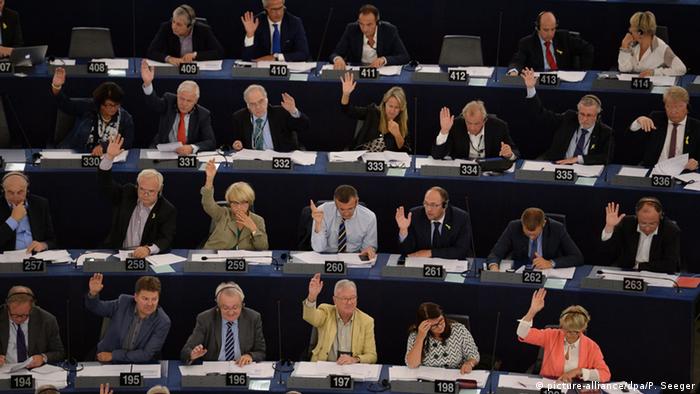 Members of the European Parliament meeting in Strasbourg on Thursday voted overwhelmingly to support Juncker's proposals, with 432 voting in favor of the non-binding resolution and just 142 against, with 57 abstentions.

A statement posted on the European Parliament's website said the lawmakers backed the Commission's proposal to relocate 120,000 asylum seekers from Italy, Greece and Hungary. This came a day after it backed an emergency proposal for relocating 40,000 asylum seekers.

It also said that a majority of lawmakers believed that the bloc's "Dublin rules," which determine in which member state any given migrant is required to register, should be amended through a "fair, compulsory allocation key" taking into account "the integration prospects and the specific cases and needs of asylum seekers themselves."

The MEPs also expressed support for the idea of drawing up a common EU list of safe countries of origin and a compulsory resettlement plan under which members states would be required to take in refugees from third countries.

More important than the consensus in Strasbourg though, is how the bloc's 28 national governments react to Juncker's proposals.

EU interior ministers are to meet on Monday to discuss the proposals and several eastern members of the bloc have already expressed their opposition to a compulsory resettlement plan.

The MEPs also called on the EU's foreign policy coordinator, Federica Mogherini to convene an international conference on refugees "with the aim of establishing a common global humanitarian aid strategy." They said that in addition to EU officials, it should include representatives from all of its member states, United Nations agencies, non-governmental agencies, the United States and Arab countries.

The European Union is experiencing an influx of migrants from the south that is unprecedented in the history of the bloc. While Germany alone is expecting to receive around 800,000 migrants by the end of 2015, some European countries have said they are determined to take in as few as possible. While many of the migrants have come from war zones such as Syria, many have also come from the western Balkans, where no major conflict currently exists.