The European Union suffers from a lack of unity, EU Commission President Jean-Claude Juncker has said in a state of the union speech. How the EU addresses today's refugees will be a defining moment for the bloc. 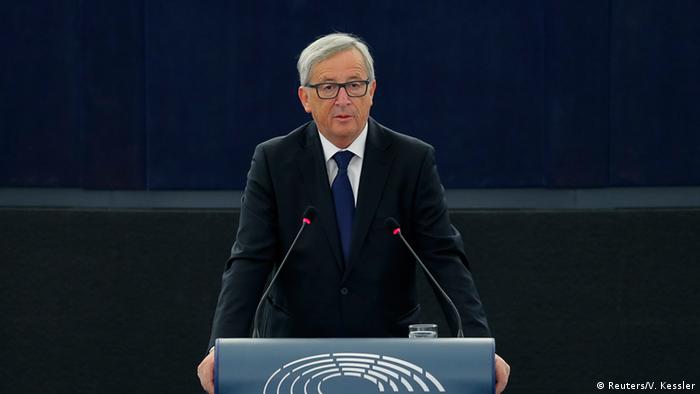 The European Commission will offer better protection for refugees and improve its frontier defenses, its head, Jean-Claude Juncker, told members of European Parliament in a speech on Wednesday in Strasbourg.

"There is no reason to put things in rosy colors - we are not in a good state," he said. "There is a lack of Europe in this union and a lack of union in this European Union. We have change that and now."

The majority of Juncker's speech dealt with how the bloc would respond to the ongoing refugee crisis as thousands of people flee to Europe from Syria, Africa and the Middle East.

"It is high time to act, to manage the refugee crisis because there is no alternative," he said. "We are fighting against Islamic State, why are we not ready to accept those who are fleeing Islamic state?"

When considering their response to the refugee crisis, Europeans would do well to remember their shared history, Juncker said.

"We Europeans should remember that Europe is a continent where nearly everyone at some point has been a refugee," he said, adding that governments should not take people's religion into account when offering a safe haven to refugees.

While some 500,000 refugees have come to Europe this year, including thousands from Libya and Syria, the EU is capable of accepting more, Juncker said, adding that the Commission would present plans to relocate 160,000 refugees currently in Hungary, Greece and Italy across the European Union in a compulsory way that takes into account a country's size and economic status.

German Chancellor Angela Merkel also issued a call for compulsory sharing of refugees among European Union countries and insisted that the migrant crisis is a challenge for all 28 EU nations.

"We need a binding agreement on a binding distribution of refugees among all member states, according to fair criteria," Merkel said in an address to German parliament on Wednesday. Germany has taken in more refugees than any other EU nation.

The EU's first refugee plan, which called for relocating 40,000 refugees, never won full support, and only around 32,000 refugees have been allocated. Hungary was among the countries to reject it, along with the Czech Republic, Slovakia and Poland. Britain, Ireland and Denmark have legal exemptions from taking part in the plan but could choose to participate.

Admitting that Europe could not host all refugees, Juncker compared European steps to confront the refugee crisis with efforts made by other countries, including Turkey, Jordan and Lebanon, saying the number of refugees accepted in Europe represents just 0.11 percent of the EU population.

"In Lebanon, refugees represent 25 percent of the population which has just one fifth of the wealth of the EU," he said. "Who are we to never make such comparisons?"

Juncker said he was in favor of asylum-seekers being permitted to work while their applications are being processed calling the right to work a matter of human dignity.

He also said the European Union needed to enact a standard system to legalize migration to the bloc.

"It is not enough to protest illegal migration, we need to organize legal ways to Europe," Juncker said to applause from members of European Parliament.

The EU Commission would present a list of so-called "safe countries" to help national authorities focus their efforts on processing refugees with a higher chance of receiving asylum, such as those from Syria. People from nations included on the "safe list," which Juncker said should include EU candidate countries in the Balkans like Albania, Macedonia and Serbia, would have to meet strict conditions for asylum to avoid deportation.

Thousands of refugees are still arriving in Munich every day, but so far Bavarian efficiency has proved up to the challenge. But as Ben Knight reports, some volunteers have doubts about Germany's response to the crisis. (08.09.2015)

Chancellor Angela Merkel and Sweden's Prime Minister Stefan Lofven have called for a coordinated and mandatory system for the redistribution of asylum seekers within the EU. The UN has demanded a "global response." (08.09.2015)

Hungary has become one of the main focus points of Europe's refugee crisis over the past few weeks. Many enter the EU nation via the town of Röszke, on the Serbian border, from where DW's Michaela Küfner reports. (08.09.2015)

State of the Union 2015: Time for Honesty, Unity and Solidarity

Read the 10,000-word speech Junker said he had to "brutally shorten" to deliver to the European Parliament