Brussels has apologized after Ursula von der Leyen featured in an election video for Croatia’s ruling party. The appearance was deemed to have breached European Commission members' guidelines on political neutrality. 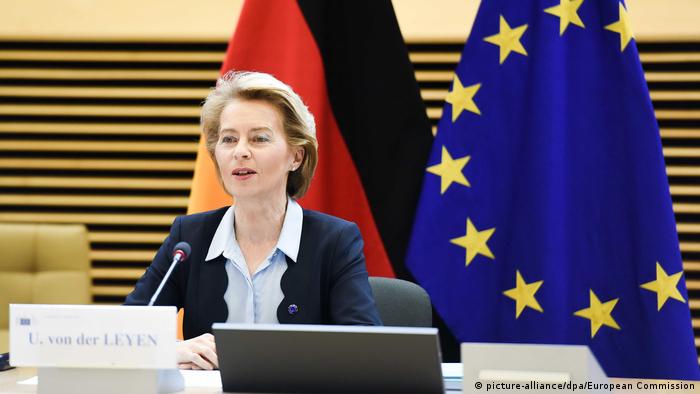 The European Commission on Monday apologized after its chief Ursula von der Leyen appeared in an election video for Croatia's ruling party, ahead of Sunday's parliamentary election.

Von der Leyen, a former German defense minister, appeared in a promotional video clip with other figures from the EU's center-right European People's Party, in an ad posted over the weekend by the Croatian Democratic Union (HDZ).

However, the code of conduct for members of the European Commission states that they "shall abstain from making public statements or interventions on behalf of any political party or organization of the social partners of which they are members,” except for when they stand for election or participate in a vote.

Von der Leyen's move sparked further controversy, as during her very short appearance, she spoke in front of an EU flag in a corridor of the commission headquarters, as she does in official EU videos.

"With her show of partisanship, she is gambling away trust and thereby damaging the office," senior German Social Democrat MEP Jens Geier told AFP.

The commission chief acknowledged that any message of a political nature must "absolutely respect" the rules of code, her spokesman Eric Mamer said, adding that she was meant to be speaking in a personal capacity.

He said the video had been shot on Friday at the request of the Croatian Prime Minister's Office, "alongside a whole series of other video messages that the president was in the process of recording," before the video was sent to Croatia.

"Mistakes were made," he told reporters in Brussels. Mamer added that von der Leyen had recorded several other messages that day as part of her communication strategy during the coronavirus crisis, which requires the use of video for virtual appearances, as in-person meetings remain limited.

"Obviously this video should not have been recorded against the backdrop of the Berlaymont [building]," said Mamer, referring to the commission headquarters in Brussels. "When it was recorded they used the same backdrop they had used for the previous video recordings."

Mamer added that despite the video hiccup, von der Leyen believes that EU council members should be able to publicly participate in political life.

"Clearly the president is of the view that it's a good thing for European democracy that members of the college can engage in active political life," he said. "So that's the kind of thing which must be permitted. At the same time, the appropriate conditions must apply to any such activities."

According to partial results, the ruling HDZ party overwhelmingly won the elections held on Sunday. With over 90% of the vote counted, the HDZ has 66 seats in Croatia's 151-seat parliament and is likely to form a new coalition government with smaller right-wing groups.

The newest country in the EU is at the ballot box — but young voters are likely to turn their backs on the election. (04.07.2020)

Germany takes over the rotating presidency of the EU, for the last time under Chancellor Merkel. The bloc is facing immense challenges: A global pandemic and resultant recession. (01.07.2020)