The center-right HDZ party has scored a significant majority in Croatia's parliamentary election. The opposition had said early elections would endanger voters amid the COVID-19 outbreak. 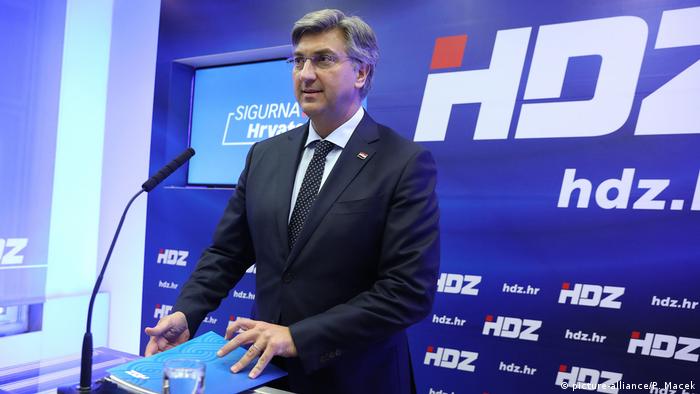 Croatia's acting prime minister Andrej Plenkovic on Monday praised the "great result and a great victory" for his conservative Croatian Democratic Union (HDZ) party as results of the country's parliamentary election rolled in.

Exit polls on Monday showed the ruling HDZ party, which Plenkovic leads, scoring a landslide victory: with nearly all votes counted, the party was slated for 66 seats in the 151-member parliament.

Their main rivals and expected victors the Social Democratic Party (SDP) surprised by securing only 41 seats for the coalition it leads. SDP leader Davor Bernardic resigned on Monday in response.

HDZ's significant lead means they will be able to govern without a heavyweight coalition partner and may only need support from very small partners to form a majority.

The far-right Homeland Movement, who had been expected to play kingmaker, was projected to win 16 seats. Two smaller parties, Mozemo (We Can) and MOST (Bridge) were expected to grab eight and seven seats respectively.

HDZ, who have led Croatia for most of its nearly 30-year independence, said they would decide in the coming days whether there would be a coalition, but hinted that the party would not partner with Homeland Movement.

"I am not a populist and I hate populists," HDZ vice president Ivan Anusic said, daily 24Sata reported. "People know we are facing huge challenges and populists, and incompetent people must not be allowed into the government."

Speaking with DW, professor of political science at the University of Zagreb Dejan Jovic said the prime minister is now in the comfortable position of being able to choose with whom HDZ will form a government.

"One of the fears HDZ had was that the Homeland Movement party, which is more to the far right and actually kind of Orbanist on the immigration and anti-minority, will have such a power, but they don't," he said.

He also highlighted the way SDP's big loss could shake up the status quo in Croatia.

"The new forces in Croatian politics involve the new green left coalition, which has scored very well. And actually might be a serious challenge for Social Democrats from the left," he said.

Voter turnout for the Sunday election was weak amid the coronavirus outbreak. The turnout was around 46% at 4:30 p.m. local time (1430 UTC/GMT), according to the state election commission (DIP).

Hoping to capitalize on what appears to be a good performance in tackling the COVID-19 pandemic, Plenkovic moved the election a few months forward.

Experts said he wanted to hold elections before the coronavirus' economic fallout is fully felt by the public.

Croatia has registered 3,000 infections and 110 related deaths, however, the country has seen an uptick in coronavirus cases in recent weeks.

The left-leaning Social Democrats (SDP) accused the government of endangering citizens by "rushing" to hold the elections early, instead of their initial plans for autumn. But Plenkovic defended the move, saying the "sooner the better" for safety reasons.

"All recommendations of all experts were that it (virus) can be more dangerous in autumn than it is now, that is why the elections are today," the 50-year-old told reporters after casting his ballot.

Voters were advised to wear masks and stay away from the polling stations if they were feeling sick. They were also told to bring their own pen.

One of the main tasks for the next government will be to revive the country's economy, which is heavily dependent on tourism. The tourism sector has suffered badly due to the pandemic.