New statistics show a drop in the number of people killed in road traffic accidents across the European Union. But there is still a long way to go towards making EU roads safer for those who travel them. 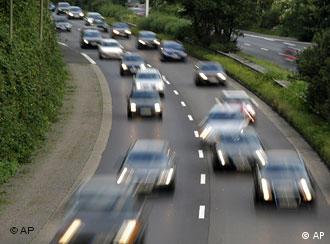 European roads have a heavy load to carry

Figures released by the European Transport Safety Council (ETSC) show that 38,000 people lost their lives in traffic accidents in 2008. Although that figure is down 15,400 since 2001, it is still miles away from the 27,000 deaths target which the EU set itself for 2010.

In order to now reach that reduced figure, there would need to be a 17 percent annual reduction in deaths on Europe's highways and byways both in 2009 and 2010. And that is just not realistic, experts say.

In an ETSC press release, the body's Executive Director Antonio Avenoso said the EU should come up with a new program for better road safety in the next decade.

“New targets must be set for 2020 which will mobilise action at a joint European level,” he said, adding that “more EU instruments, like structural funds for transport” should be used to further reduce the numbers of deaths and disabilities resulting from accidents on European roads.

The good and the bad of EU roads 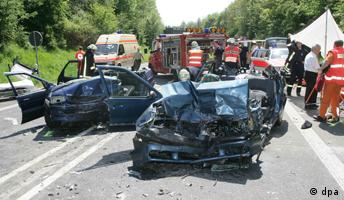 Crashes are an too familiar a sight on European highways

Countries which achieved the highest rates of accident reduction included Estonia and Lithuania, each of which saw a 33 percent decrease. Slovenia and Latvia revealed drops of 27 and 25 percent respectively. But the report partially attributed the falling figures in the Baltic states to a reduction in traffic volume in the face of recession and high fuel costs.

Poland and Slovakia showed little progress, while in both Romania and Bulgaria, the death tolls were higher in 2008 than back in 2001.

After Malta, Sweden, the Netherlands and Britain are still home to the safest roads in the EU, but Switzerland, Norway and Germany, notorious for its fast Autobahn highways, are catching up.

Snow storms across western Europe killed at least five people on Monday and disrupted flights and train services in Britain, France and Spain as authorities warned of worse to come. (03.02.2009)

As US lawmakers discuss the creation of their own system of auto trade-in subsidies, critics of the scheme here in Germany are questioning the motivations of decision-makers in Berlin. (10.04.2009)

The passage of a bill for an ambitious construction project means that drivers might soon be able to hop in a car and drive straight from Copenhagen to Hamburg. (19.06.2009)