Snow Storms Cause Death and Chaos in Europe | Europe | News and current affairs from around the continent | DW | 03.02.2009

Snow storms across western Europe killed at least five people on Monday and disrupted flights and train services in Britain, France and Spain as authorities warned of worse to come. 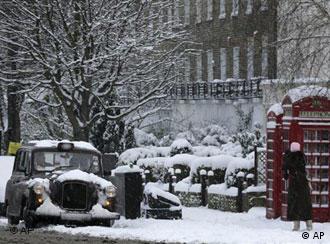 Traffic in London was brought to a virtual standstill

Snow storms killed two climbers on Mount Snowdon in Wales while three people died in accidents and from the cold in Italy as some of the heaviest snowfall in years shut down transport links in some of western Europe's major cities.

In London, which experienced some of the worst snow in 20 years, most flights at Heathrow airport were grounded, buses were taken off the roads, subway services suspended and schools were closed, bringing traffic in the British capital to a virtual standstill.

London Mayor Boris Johnson suspended the congestion charge for motorists in the center of the capital for Monday and appealed to higher powers to end the bad weather. 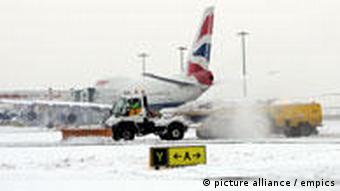 "My message to the heavens is -- you have put on a fantastic display of snow power, and I think that is probably quite enough," he told the BBC.

But authorities in Britain said the country is bracing itself for further disruptions with more snow expected in the next days. Some parts of London could see 30 centimeters of snow, news reports said.

In Italy, three people were killed by the snow storms. One man died from the cold in the northern town of Lecco. Another was killed in Sicily when his car was swept away by a river.

Another 500 people were evacuated from their homes in Cosenza in the southern region of Calabria. Snow also forced the cancellation of about 20 flights from Rome and Milan.

Eurostar advised passengers against travelling between London and Paris on high-speed trains because of snow delays.

In France, Paris-Charles de Gaulle airport cancelled dozens of flights. Some French high-speed trains were cancelled and those that did run were ordered to slow. France's roads agency also urged motorists to cancel non-essential journeys, with some roads impassable around Paris and in the east around Strasbourg, where dozens of accidents were reported.

Snow and heavy rain were forecast for different parts of France on Tuesday.

A storm packing winds of more than 100 kilometers (60 miles) an hour injured about a dozen people in southern Spain, emergency services said.

A major storm took the lives of people in Spain, France and Germany this weekend. Millions more are recovering from the damage Sunday, Jan. 25, in the wake of a storm dubbed Klaus by weather officials. (25.01.2009)