Europa League: Dortmund safely into playoff round with routine win

Borussia Dortmund scored five second half goals to comfortably secure their place in the playoff round of the Europa League in front of a record crowd. Reus, Aubameyang and Mkhitaryan's hat-trick sealed the win. 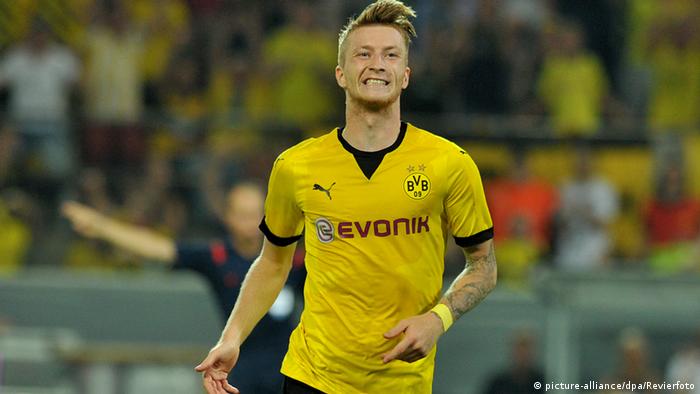 Thomas Tuchel secured a win in his first competitive home game as Borussia Dortmund head coach, securing a place in the playoff round of the UEFA Europa League.

Marco Reus hit the net on 47 minutes to complete the job of dispatching the Austrian side in front of more than 65,000 at Signal Iduna Park - the new record set for a qualifying match in the Europa League.

Pierre-Emerick Aubameyang added a second on the hour mark before Henrikh Mkhitaryan struck a hat-trick in the last 20 minutes to round off a solid workout for the German club.

Dortmund held a 1-0 aggregate advantage after the win in Klagenfurt, but goalscorer Jonas Hofmann dropped out of the eleven for Shinji Kagawa. Meanwhile, the scrutiny around Tuchel's first-choice keeper continues with Roman Weidenfeller back between the posts.

The yellow-and-blacks are still in pre-season mode, with the first half performance lacking in sharp passing that was evident in the Far East. Dortmund threatened with Reus not wearing his shooting boots having missed a handful of chances in the first 45 minutes.

The German forward linked well on the wing, but couldn't find the net in the first 10 minutes. On 24 minutes, Reus sprinted down on goal and fired a shot straight at Wolfsberg keeper Alexander Kofler who managed to hold on.

A minute later, Kofler had to react well to block an effort from Aubameyang as Dortmund edged closer to the opener.

But the center of attention before the interval was the Romanian match officials. Reus was dubiously booked for a handball, while his stonewall penalty claim was waved away. Marius Avram, the referee, left the field to a chorus of whistles.

Immediately after the restart, Dortmund found the breakthrough. Mkhitaryan held the ball up well in attack, laying off to Reus who steadied himself in the box and finished low into the corner.

The goal for the hosts took the stuffing out of the game, meaning Dortmund could pass through the Wolfsberg defense at will. Chances were aplenty, but Dortmund had to wait until the hour mark to make the game safe - Aubameyang running through on goal and lobbing Kofler with a nonchalant finish.

But in the last 20 minutes, Armenian forward Mkhitaryan stole the show. His first was an excellent left-foot finish from outside of the area, while he bashed home a second with his stronger foot on 82 minutes.

Mkhitaryan struck a third from long distance late in the game to bag Dortmund a spot in the next round draw of the UEFA Europa League. The draw takes place on Friday afternoon alongside the Champions League draw, which involves Bayer Leverkusen.