Thomas Tuchel recorded his first competitive win as Borussia Dortmund coach in the Europa League third qualifying round. The Germans were made to sweat, but possess a lead going into next week's return leg. 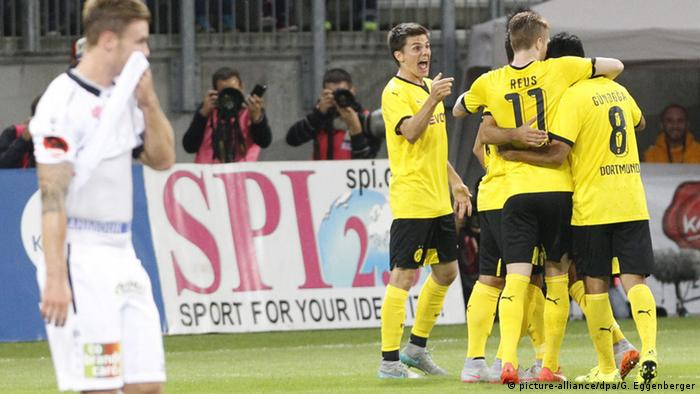 Jonas Hofmann's first-half strike has given Borussia Dortmund a slender lead in their UEFA Europa League third qualifying round tie with Austria's Wolfsberg.

The right-winger - who spent last season on loan at Mainz - rewarded new coach Thomas Tuchel for a surprising inclusion in the starting eleven by scoring the only goal of the match. "I'm delighted that the trainer had trust in me," Hofmann said post-match.

While Hofmann started ahead of Kevin Kampl, Tuchel picked Roman Bürki to start between the sticks for the first time in competitive action for Dortmund. However, Tuchel admitted pre-match that the "goalkeeper question is still open" and that Roman Weidenfeller would start the second leg next Thursday.

Wolfsberg's early spirits were dampened by a fine Borussia Dortmund opener on 15 minutes when Hofmann finished from close range. Pierre-Emerick Aubameyang won the ball unusually in a midfield position and he freed Henrikh Mkhitaryan who turned the ball across goal for the 23-year-old to have the easiest of finishes.

Despite its competitive status, the match in Klagenfurt had the atmosphere of a pre-season encounter like the matches Tuchel and Dortmund encountered in Japan and Malaysia. Home forays towards Bürki's goal were met with ripples of enthusiasm from the crowd, but it threatened Dortmund little.

The German side should have put the game beyond doubt early into the second period when Hofmann blasted his shot straight at Wolfsberg keeper Alexander Kofler. Two minutes later, Aubameyang, Dortmund's top scorer last season, misjudged his header and failed to hit the target from close range. 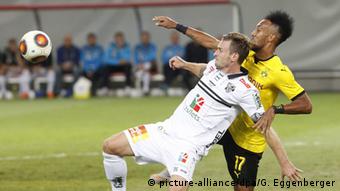 Dortmund could have lost the match in Austria, but prevailed under pressure

Around the hour mark, Tuchel's side suffered a serious dip in intensity. The visitors - who had only managed to complete 33 passes in the first 45 minutes - started to wander into dangerous areas. On 61 minutes, midfielder Thomas Zündel found himself one-on-one with Bürki, but blazed his finish over the crossbar.

Tuchel's double substitution - Gonzalo Castro and Shinji Kagawa for Julian Weigl and Hofmann - had no measurable impact. Wolfsberg were getting closer and closer to the opener - veteran Joachim Standfest's finish was deflected in the six-yard-box by Lukasz Piszczek. Less than a minute later, Mkhitaryan had to react sharply to clear Tadej Trdina's header off-the-line.

The home side sensed a chance to cause a major upset, but left themselves open at the back. Kagawa was flagged offside on 74 minutes in the build-up as Mkhitaryan put the ball into the net from 10 yards.

With seven minutes on the clock, Dortmund's last-ditch defending prevented an equalizer. Former Union Berlin striker Silvio Oliveira couldn't turn the loose ball home from inside the six-yard box and the Bundesliga club held out to secure a narrow first leg win.

"I'm very happy with the result. I was anticipating that after the intensity of the training camp that it would be a tough start," the Dortmund head coach said after the win, which puts his side in the driving seat ahead of the second leg next Thursday.

Dortmund's campaign starts earlier than normal with a third round qualifier against Austrian side Wolfsberger AC. It's expected to be an thorough examination ahead of the league season start on August 14. (29.07.2015)

With the new Bundesliga season getting closer, Borussia Dortmund wants to challenge again. Is their position under threat? Club boss Hans-Joachim Watzke doesn't seem to think so. (21.07.2015)