Just one goal was scored in the three games involving German teams in the late Europa League matches. However each side will be happy with their results as Bundesliga clubs remained unbeaten in the last 32. 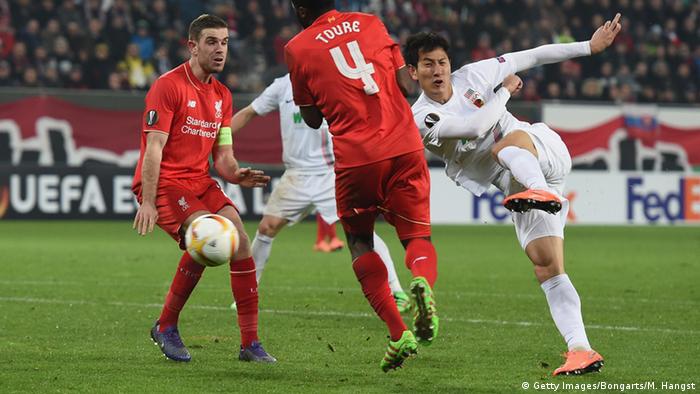 Having watched a stunning choreography take center stage at the WWK Arena, Augsburg were dealt a horrible blow to their chances of victory early in their first European knockout match. Top goalscorer Raul Bobadilla, who had six goals in the group stage, pulled up with a strained hamstring in the opening four minutes.

Augsburg's only center forward didn't make his way off the pitch until the 22nd minute, just after the first real chance of the game. Bobadilla's opposite, Daniel Sturridge, nearly broke free inside the Augsburg area, but a superb tackle from Ragnar Klavan left the ball for Marwin Hitz to collect harmlessly.

The tempo of the game dropped off after the opening exchanges, but Alexander Esswein had a glorious chance to give Augsburg the lead just before the break. The winger broke down the right-hand side and despite Tobias Werner being free in the box, he chose to go for goal, with Simon Mignolet equal to Esswein's effort.

Liverpool came within inches of taking the lead just before the hour-mark when a free kick created danger in the box. Kolo Toure's attempted header forced Caiuby to block the ball, and a touch from Paul Verhaegh almost took the ball over his own line before Hitz came to the rescue.

Alberto Moreno stung the hands of Hitz with a shot after 75 minutes as Liverpool kept pressing forward to earn what could have been a crucial away goal. With just a few minutes to play, it was the home side which had a real chance to clinch an historic victory. Ji Dong-Won connected with a volley which beat Mignolet, but not the post.

Augsburg will be pleased with the result, despite not taking a lead into next week's return leg at Anfield. 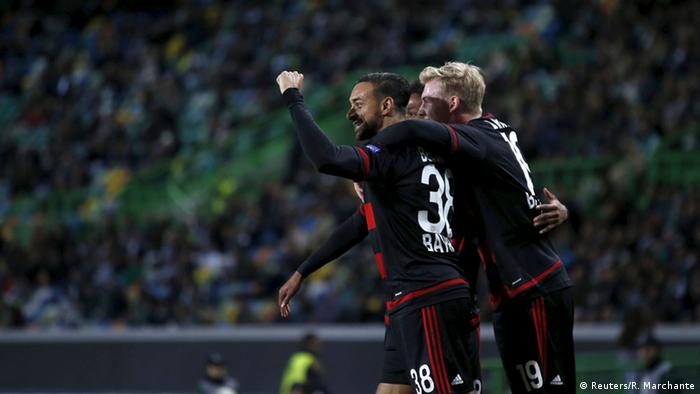 It was an end-to-end first half in Sporting, with both sides playing a counterattacking and pressing style. Julian Brandt and Stefan Kießling had the opening opportunites of the game, but neither could trouble Rui Patricio in the Sporting goal.

Ömer Toprak was handed a great chance to give Leverkusen the lead, but he sent his header over the crossbar from a corner with 24 minutes played. It was the best chance from either side in the early going, but Roger Schmidt's squad took a deserved and vital lead not long after. Kiessling played a neat pass out wide to Tin Jedvaj and the fullback curled a superb cross to the back-post where Karim Bellarabi was waiting to put the ball home off his knee. Bellarabi's goal was his first in 2016 and just his seventh in all competitions this season.

Sporting only produced one shot on Bernd Leno's goal in the entire game, which gave the German goalkeeper no problems. Leverkusen's chances were given a huge boost when Ruben Semedo was sent off for a second bookable offence after 74 minutes. Bellarabi almost had the last laugh in the game after he hit a fantastic curling shot onto the post with Rui Patricio scrambling to save it.

But it finished 1-0 to Leverkusen, who return to Germany with a crucial away goal. Sporting won only one of their three away games in the Europa League group stage, providing Leverkusen with confidence they can advance out of a European knockout match for the first time in five seasons. 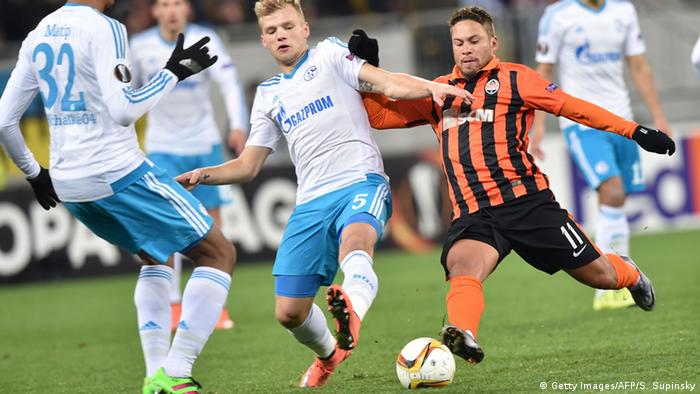 Schalke will be pleased with their result

Coach Andre Breitenreiter stuck to his plan of rotating the squad in the Europa League this season. With striker Klaas-Jan Huntelaar on the bench, a tight and tense first half followed. Both sides had chances to open the scoring, the best of which fell to the travelling Germans.

With just 14 minutes played, Younes Belhanda streaked into the Shakhtar box, cutting inside and out of three defenders, before seeing his goal-bound effort cleared off the line. Birthday-boy Roman Neustädter almost broke the deadlock just before the break, but his header was too close to goalkeeper Andriy Pyatov.

Leroy Sane looked certain to give Schalke an early second-half lead as the away side continued to creat opportunities. The young star got on the end of Eric-Maxim Choupo-Moting's cross, but his light header drifted past the far-post.

With 15 minutes to play Schalke were handed a fantastic opportunity to score a crucial away goal when the home side conceded an indirect-free-kick after a back-pass. Choupo-Moting touched the ball for Johannes Geis, but his effort was blocked on the line, which had been covered by at least eight Shakhtar players.

Before the end, it was Schalke goalkeeper Ralf Fährmann who was forced to save the game for his side, making a superb double stop after efforts from Taras Stepanenko and Olexandr Gladkiy. Schalke's good away result was assured with just a couple of minutes to play, after Olexandr Kucher saw red for a second bookable offense.

Schalke fans may still be nervous about their sides chances of qualifying. The Royal Blues have lost two of their three home matches so far in 2016, but Shakhtar themselves have struggled away from home in Europe. The Ukrainian side lost all three of their games on the road in the Champions League group stage.

Borussia Dortmund were back to their best against Porto in the first leg of their Europa League last 32 tie on Thursday night, with a goal in either half giving the Bundesliga side a clear advantage. (18.02.2016)

Bayer Leverkusen's chairman has admitted that failure to qualify for the Champions League could force them to sell some of their best players. This may include highly sought-after striker Javier Hernandez. (18.02.2016)