Borussia Dortmund were back to their best against Porto in the first leg of their Europa League last 32 tie on Thursday night. A goal in each half gave the Bundesliga side a clear advantage. 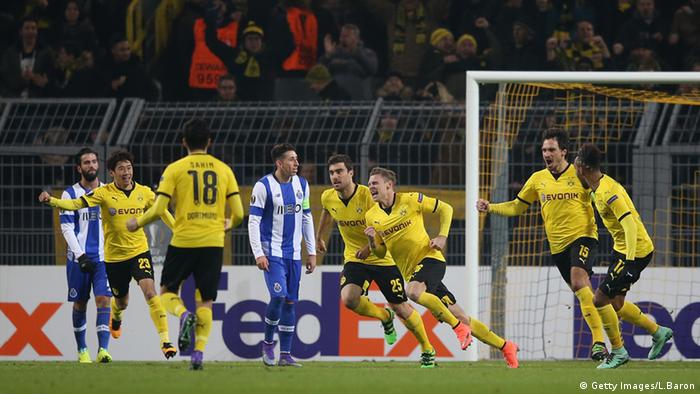 It was a dream start to the knockout rounds for Dortmund, as Lukasz Piszczek put the home side in front inside just six minutes. Following a short corner, Henrikh Mkhitaryan's pin-point cross found the Dortmund full-back. His initial effort was saved, but Piszczek beat goalkeeper Iker Casillas with the rebound.

Dortmund have not lost a game at the Signal Iduna Park in which they have scored, and for the remainder of the first half, that record never looked in doubt. Nuri Sahin was making his first appearance in 355 days, and looked assured in midfield alongside the young but confident Julian Weigl.

Despite dominating the majority of possession and keeping the ball in the Porto half for most of the opening 45 minutes, Dortmund's only other chance came from a Marcel Schmelzer cross. His attempted delivery into Pierre-Emerick Aubameyang ended up striking the near-post. 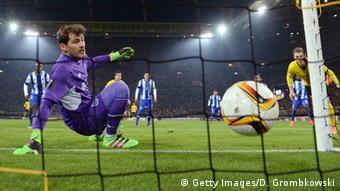 The returning Sahin was taken off after 56 minutes, replaced by Moritz Leitner. Dortmund started the second half like they had finished the first, in full control.

Just before the hour mark, Marco Reus was brought down by a reckless challenge from Varela. His ankle took the brunt of the tackle, which made the stadium gasp for air. But the German international soon returned to the pitch and almost gave Dortmund a two-goal lead.

Leitner's chip found Shinji Kagawa, who in turn looped a pass to the back-post towards Reus, but the German's volley was heading wide before Kagawa attempted to take the shot onto goal. Reus wasn't made to watch much longer to find the net, though.

Kagawa found Mkhitaryan inside the box and with space to play, the midfielder lined-up Reus for a drive at goal. The shot deflected off a Porto defender and past a helpless Casillas.

The score could easily have been 3-0 before the end of the match. Kagawa forced a save from Casillas at the near-post before Mkhitaryan smashed a superbly timed header of the woodwork.

But the match finished with Borussia Dortmund taking a two-goal lead into next week's second leg in Portugal. Thomas Tuchel's side will feel like they are in a strong position to progress into the last 16.