Eurogroup treads water waiting for Germany | Europe| News and current affairs from around the continent | DW | 15.10.2013

With a hamstrung German finance minister, the Eurogroup can do little more than twiddle its thumbs. The open questions on a banking union and rescue packets have been put off until a new German government is formed. 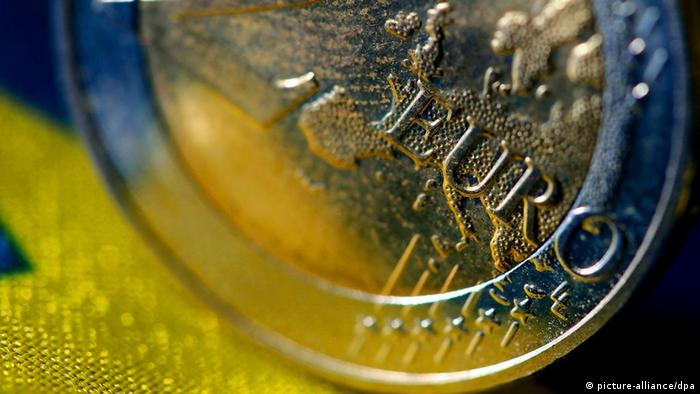 There was one person missing at the meeting in Brussels. German Finance Minister Wolfgang Schäuble skipped the summit of the 17 euro states, replaced by a high official from Luxembourg. Schäuble had to be in Berlin to take part in negotiations with the Social Democrats over the possible formation of a new grand coalition government. Chancellor Angela Merkel required his presence in order to calculate the costs of various compromises. But in his absence, the Eurogroup cannot really do much.

Key decisions on the controversial aspects of the proposed creation of a banking union had to be put off. Where should the winding-down operations of the various banks be based? What kind of financial injections do floundering banks need - and who should do the financing - before the banks are put under the supervision of the European Central Bank next year?

These questions remain open, and cannot be answered without the German finance minister. The head of the Eurogroup, Dutch Finance Minister Jeroen Dijsselbloem, put a cheerful face on the situation, claiming that everything was going to schedule. "There are still a lot of technical details to discuss," he said. "We are in a phase of technical discussion. Sometimes politicians have to face this too, but it will take a few more months." 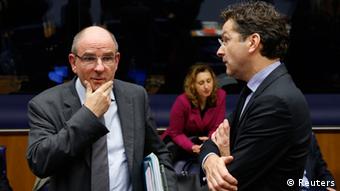 The assembled ministers - minus their German colleague, Wolfgang Schäuble

The two biggest Eurogroup countries, Germany and France, do not agree on who should liquidate the bankrupt banks in the banking union. Germany opposes the plan to leave the operation to the ECB without changing European treaties. France and the EU Commission, on the other hand, believe that treaty changes aren't necessary.

As a compromise, the responsible EU commissioner, France's Michel Barnier, suggested having the European Stability Mechanism, Europe's bailout fund, take charge of the winding up. But the head of the ESM, the German Klaus Regling, has already told news magazine Der Spiegel that he is not keen for his office to take over the complex task.

Dijsselbloem also hesitated over the otherwise positive news that both Ireland and Spain intend to leave the bailout program at the end of the year, as planned. But this decision, too, won't be finalized before November. Olli Rehn, EU commissioner for economic and monetary affairs, cheerfully declared that the two countries were going in a good direction. "Ireland and Spain have seen a very important economic turnaround. Both countries now have a good chance of successfully concluding their program shortly," he told reporters in Luxembourg. 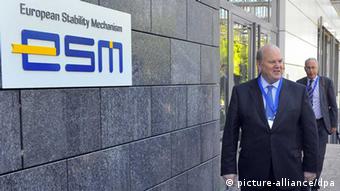 Ireland applied for financial aid three years ago to avoid bankruptcy, needing several billion euros to save a number of banks that were sitting on bad mortgages. The result was an economic downturn. It was only by sticking to a rigid austerity program - following new elections - that the Irish government was able to fulfill EU and IMF conditions. "The 2014 budget will be an important milestone. The economy is growing and 3,000 jobs are being created each month," said Ireland's finance minister, Michael Noonan.

Meanwhile, Spain borrowed some 40 billion euros ($54 billion) from the European bailout fund to save its own troubled banks. This bailout program was significantly smaller than the one Ireland needed, and is expected to have run its course by the end of December.

The Eurozone countries also talked about the other so-called "program countries" - Greece, Portugal, and Cyprus - who receive aid from European and international pots. Greece, beneficiary of by far the largest bailout package, will need further help in the coming year. But it won't be decided until mid-2014 exactly how many extra billions Greece needs in order to ensure that it achieves financial independence by 2022. Schäuble is against debt cuts or debt waiving by public creditors, but the Eurogroup wants to wait and see what the new German government's euro bailout policies will look like.

All eyes on the US 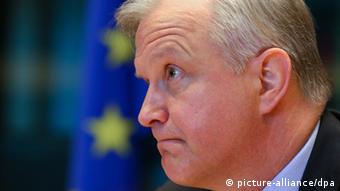 Rehn said everything was going according to plan

France and Italy are also under close scrutiny, after their economic development became a cause for concern at the last informal meeting of ministers in September. The EU Commission wants to evaluate the budgets of all the EU member states by mid-November. Only then does the Eurogroup intend to start making decisions. Rehn suggested that the situation in Europe was relatively relaxed, so timetables for the balancing of budgets could be extended a little. "We can do it with a somewhat slower pace than before, mainly because we have an enhanced credibility in the fiscal policy euro member states. And we now have a reinforced economic governance, which provides a framework for consistent consolidation and structural reforms," he said, before warning that the economic and debt crisis was not yet over.

One major danger for the European economy is the uncertain situation in the US. The fiscal dispute between the president and Congress, and the looming threat of a US default, is currently casting a long and threatening shadow over the euro crisis. "I think it's very important that the United States overcomes its fiscal gridlock," Rehn said. "Otherwise, it could have potentially dramatic consequences for the world economy. And, of course, it could also have negative ramifications for the still-nascent recovery in Europe."

Amid the EU's lack of a strong central government to enforce common fiscal policy, a "shadow state" has emerged - a patchwork of agencies that is facing growing criticism as undemocratic and illegitimate. (06.04.2013)

Industrial output across the 17-member euro area has rebounded, raising hopes the sector will contribute to economic growth in the months ahead. But a strong euro might put a dampener on current expectations. (14.10.2013)

In an interview with DW, Managing Director of the International Monetary Fund Christine Lagarde said she was optimistic about the fiscal future of Europe, but also warned that a lot of work still has to be done. (08.10.2013)