Two former defense ministers have briefed a parliamentary committee in Berlin on the abandoned Euro Hawk surveillance drone project. The government argues it was doomed from the start, but has found few to support this. 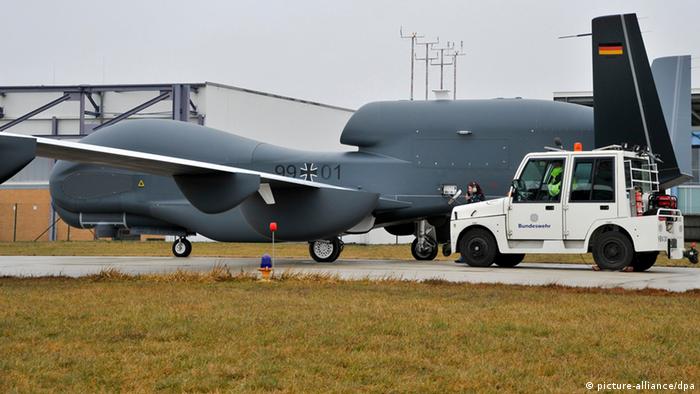 Three of 19 witnesses have testified at a parliamentary committee seeking to establish what went wrong with plans to build a new surveillance drone for the German Bundeswehr. Some 600 million euros ($790 million) were pumped into the Euro Hawk project until it was suddenly shelved in May this year. Either prohibitively expensive, or potentially unattainable, licenses for flight clearance in EU airspace floored the plans.

Two of Monday's speakers were predecessors of current Defense Minister Thomas De Maiziere, one from either side of the political aisle. Neither of them said very much that de Maiziere likely hoped to hear.

Franz Josef Jung, a former defense minister and still a member of parliament for Chancellor Angela Merkel's Christian Democrats, had the chance to support the current government's theory that the program was flawed from its inception - under the stewardship of today's opposition. Merkel's government has talked of a "mistake at birth" in the Euro Hawk project.

"I never heard anything in connection with flight clearance problems regarding the Euro Hawk issue," Jung told the committee, saying that the deals signed with US firm Northrop Grumman and Europe's EADS during his tenure seemed to be in order.

The German parliament has taken on the task of conducting a rapid-fire investigation into the Euro Hawk drone debacle. With elections looming, the defense minister's testimony could prove politically explosive. (22.07.2013)

Jung moved from the defense portfolio to a new post as labor minister after the 2009 federal elections. He served less than a month in the role, offering to resign over his handling of an airstrike in Kunduz in Afghanistan that killed more than 100 civilians while he was defense minister. At the time, however, Jung said he was offering to quit despite the fact that he had "informed the public and parliament correctly about the information at my disposal."

Eleven years after he was sacked as foreign minister, and eight years since he held a parliamentary seat, former Social Democrat Rudolf Scharping returned to the German Bundestag.

Speaking of his decisions to fire up the Euro Hawk project in 2011, Scharping said he had simply approved a plan to replace Germany's outdated "Breguet Atlantic." surveillance plane. The former minister became more loquacious when asked about the current-day Defense Ministry activity. Scharping said that de Maiziere's criticism of his own staff for not briefing him in enough detail about the project's problems was not tenable.

"Where such information's concerned there's an obligation both to provide and to seek," Scharping said. "A minister, in my opinion, is charged with seeking solutions." The former politician said the chance to ask such questions would often crop up, either on an official visit with close colleagues, "or even occasionally over a glass of red wine."

Monday's third witness was former Bundeswehr top General Wolfgang Schneiderhan, another top-ranking German to offer his resignation after the Kunduz airstrike. He was similarly critical of de Maiziere's claim that he was not well enough informed by his team.

"If I had always waited until everything was submitted to me in writing, my time as Chief of Federal Armed Forces Staff would have been even shorter," Schneiderhan said.

The committee is seeking to race through its work during six working days spread over the course of two weeks, ahead of the campaign for this September's federal elections. De Maiziere, who moved to the defense post from the Interior Ministry after the resignation of Karl-Theodor zu Guttenberg, is considered a close ally of Chancellor Merkel.