German defense minister to face grilling over Euro Hawk debacle | Germany | News and in-depth reporting from Berlin and beyond | DW | 22.07.2013

The German parliament has taken on the task of conducting a rapid-fire investigation into the Euro Hawk drone debacle. With elections looming, the defense minister's testimony could prove politically explosive. 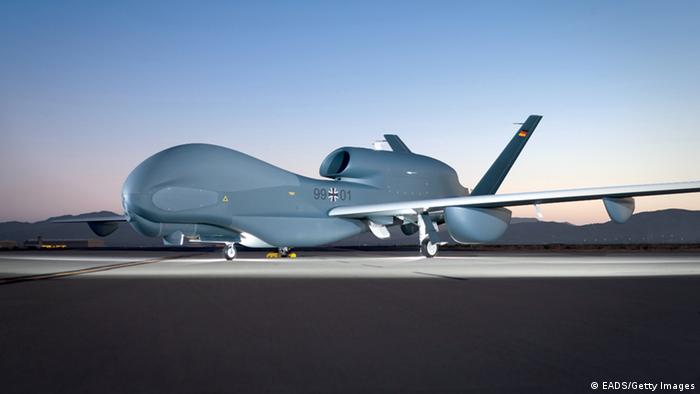 In a period of just days, German parliamentarians hope to conduct an investigation into the failure of the 600-million-euro Euro Hawk drone project, a process that would normally take months or even years.

Nineteen witnesses will be called to testify before a special committee, which will conduct its work during parliament's summer break, from July 22 until July 31. And with Germany's federal elections just two months away, the planned testimony by Defense Minister Thomas de Maiziere could prove politically explosive for Chancellor Angela Merkel's center-right coalition government.

The investigative committee wants to know how the defense ministry could invest 12 years and hundreds of millions of euros in an aircraft that is not even allowed to fly in German airspace due to security concerns. The German military had ordered four Euro Hawk drones. But right now, only one prototype exists, and it has been grounded in a hangar.

Although de Maiziere nearly lost his job over the failed project, he has so far successfully fended off calls for his resignation. The defense minister argues that he prevented even greater losses by cancelling the project last May. He claims that, up until that point, he and his staff had considered the Euro Hawk's problems to be solvable.

"The timing of the decision was correct," de Maiziere insisted. He has said that it was better for the defense ministry to cut its losses, than to let the project continue hemorrhaging taxpayers' money. 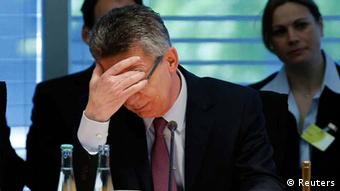 De Maiziere will be in the hot seat

But the center-left opposition is not willing to let de Maiziere off the hook that easily. The Social Democrats, the Greens and the more radical Left Party are convinced that the defense minister acted too late, resulting in hundreds of millions of euros in wasted public funds.

There is a hint of election-year politics involved. The opposition parties originally pushed for the creation of the investigative committee. And they certainly know that de Maiziere is rumored to have a close relationship with Chancellor Merkel. Damaging the defense minister's reputation could deal a serious blow to the chancellor's coalition government.

The committee plans to conclude its work in just six sessions. In addition to de Maiziere, two former defense ministers and representatives of the participating defense contractors are among the 19 witnesses. In order to stay on schedule, the committee will hear three witnesses per day and work until midnight if necessary.

While it's clear that the commissioners won't be able to conduct a thorough investigation in such a short time, they still hope to draw lessons for the future. Since there are recurring problems with the procurement of defense products, the committee wants to find out "what changes in the procurement system" should be made in light of the Euro Hawk scandal.

"Such findings could be made without a committee," grumbled the conservative Christian Democrats' chair for the committee, Markus Grübel.

The German armed forces first saw the need for an unmanned reconnaissance drone during the war in Kosovo, as the military moved away from its traditional defensive mandate and evolved into an expeditionary force. With the development of long-range drones, the military decided that traditional reconnaissance with propeller aircraft no longer had a future. 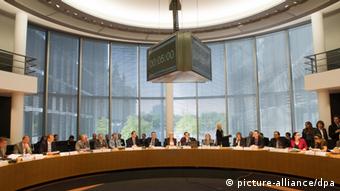 More than 10 years ago, the defense ministry began preparations for the development of a drone. The defense minister at the time was Rudolf Scharping, who has been called to testify before the investigative committee. Scharping is a Social Democrat.

In 2005, the Euro Hawk company was established, a joint venture between the European aerospace firm EADS and America's Northrop Grumman. The American defense company manufactured the Global Hawk, the brother of the Euro Hawk. While the body of the Euro Hawk is American made, its reconnaissance system "ISIS" was developed specially for the German military by the EADS subsidiary Cassidian.

The problems, which ultimately led to the Euro Hawk failure, arose out of this business arrangement. The American airspace permit for the Euro Hawk - the prototype was built in the US - was not valid in Germany and could not be obtained, because German regulators had no experience with the new drone technology. And according to the German defense ministry, the American side withheld documents detailing the technical specifications of the Euro Hawk. As a consequence, it could not be proven beyond doubt that the Euro Hawk would not pose a danger to civilian air traffic.

The Euro Hawk company claimed that the drone system functioned flawlessly, while promising that it would lay out an "affordable and doable" plan to address the safety concerns. In other words, the project could be completed if money kept coming from the defense budget. But the defense ministry cancelled the program in May and is now searching for a new platform. The reconnaissance system designed by EADS should, if possible, be used in an alternative drone project.

De Maiziere admits that his ministry did "not work carefully enough." The defense minister said that he reacted too late, when he heard about the Euro Hawk's troubles.

"I should have asked around," de Maiziere said. But he also claims that his staff did not fully inform him about the obstacles to the project. The defense minister maintains that regardless of the "shortcomings in the procurement process" the decision to cancel the project did not come too late. As a consequence, he would not resign his position, de Maiziere told the parliament's defense committee last June. The opposition had previously called for the defense minister to step down.

"How did the minister come to the finding that this project could be a success?" asked Rainer Arnold, a Social Democrat.

But regardless of what de Maiziere tells the investigative commission in his defense, he already has the reputation of not having his house in order.