Italy got their Euro 2020 campaign off to a winning start in Rome on Friday, but the city is still struggling to get enthusiastic about the tournament after a difficult year. DW's Alima Hotakie sampled the atmosphere. 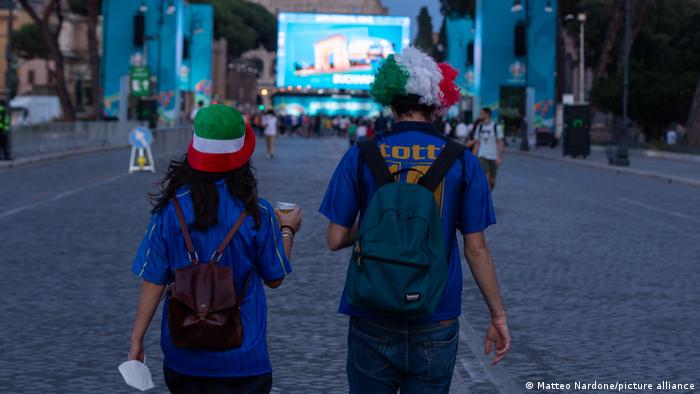 Fesitval of football? Not quite. But that may change for Italy.

If the historic monuments and statues across the city of Rome could speak, they'd be the first to express their disappointment.

The opening night of Euro 2020 was a subdued affair in the Italian capital. There were few traces of excitement and elation, at least not on the level known in Italy.

Walking the streets of Rome, days and even hours before kick-off between Italy and Turkey,

there were few signs that the city was about to jump-start one of the world's biggest football tournaments. Italian flags were rare sights. The green, white and red that's usually hoisted on cars or hung from balconies was few and far.

It sounds sacrilegious, but in a calcio-obsessed city like Rome, the idea that people are tiring of football wasn't too far away.

"The coronavirus forced many cultural activities to close, but football carried on and still carries on," said Federico Ciacci, a historian and tour guide in the city. "It feels like there are games on every day."

It's more than just a feeling. Just like leagues across Europe, Italy's Serie A continued throughout the pandemic behind closed doors. So did the Champions League, so did the Europa League, so did international football and now there will be 51 games over the course of the next month.

Perhaps it's football's non-rarity, amplified by the challenges of the coronavirus, that has increased that "tiredness." But for football fans and French tourists Christophe and Simon, it's not necessarily the sport that's the problem. "We are tired of football without fans, but not football itself," they said.

While UEFA did organize public screenings across the city, they did very little to actually ignite the flame of fans' passion. Gigantic TVs are supposed to attract gigantic crowds, but COVID-19 has made large gatherings difficult. Organizers did allow around 1,000 fans to watch Italy's victory over Turkey at the Piazza del Popolo, as long as the spectators wore masks and remained socially distanced.

But not even the sight of veterans Leonardo Bonucci and Giorgio Chiellini belting out Italy's rousing national anthem at the top of their lungs could get the crowd into a fervor. Yes, there was some flag waving and some singing, but nothing of the passion and pride Italian football fans are known for.

But it's tough getting into something when it's not even functioning at 100%. When the Stadio Olimpicohas a reduced spectator capacity of 25% it's hard for locals to get their fix. Football is a social act. It's enjoyed in large groups, and the pandemic has made that next to impossible. 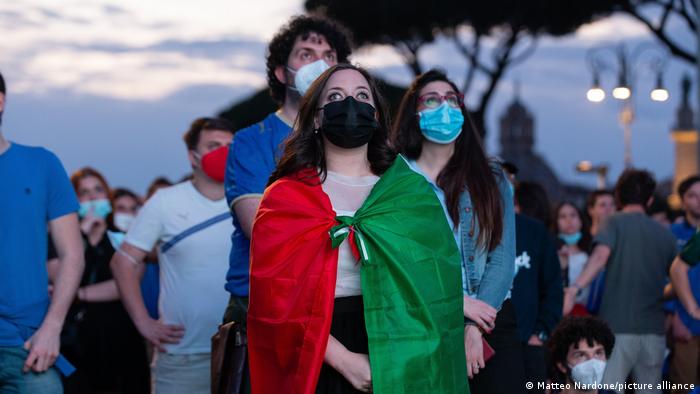 Socially distanced Italians watching the game on a big screen on the Via del Fori Imperiali, where masks are still mandatory.

Not only that, but Rome is still under a nationwide curfew and masks are still mandatory in public. That meant that fans at the public screenings had to be home by midnight, leaving little time to celebrate Ciro Immobile's and Lorenzo Insigne's goals in the 3-0 win. "A magical night!" exclaimed the Gazzetta dello Sport. But make sure you're in bed by 12.

The fact that Rome continued as one of the host cities has stirred mixed feelings among some locals. Students Federica and Denise said it "could help the economy but it's risky due to Covid-19." Many locals fear events like these could lead to a surge in coronavirus cases, despite the hygiene concepts requiring ticket holders to have proof of vaccination or negative tests.

Italy on the road to Wembley — and to recovery?

And what about the Italian team itself, now unbeaten in 28 games under charismatic coach Roberto Mancini? Shouldn't that be a reason to get excited? How far can they go? "The road to Wembley has begun exactly as we hoped," wrote La Repubblica, reflecting a newfound confidence and joy in this team.

Perhaps that's what's needed to boost the atmosphere in Rome. Italy needs to go deep in the tournament in order to revive the passion of the locals.

There were already more cars honking and more Italian flags on the streets at full-time on Friday. But the statues remained as silent as ever.