EU leaders called for emergency talks in Brussels to seek a ceasefire in the oil-rich North African nation. Britain, France, Germany and Italy have appealed to Turkey's president not to interfere in the Libyan conflict. 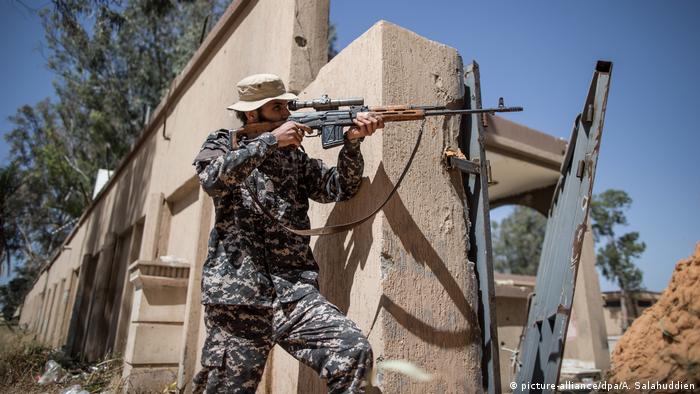 The European Union warned Turkey to stop  "interference" in conflict-torn Libya and called for an end to fighting around the capital, Tripoli.

Josep Borrell, the EU High Representative for Foreign Affairs and Security Policy, criticized Turkey on Tuesday for deploying troops in Libya on the weekend. "We asked for a ceasefire and we asked also to stop escalation and to external interference, which has been increasing in the past days," Borrell told reporters.

"It is obvious that this makes a reference to the Turkish decision to intervene with their troops in Libya which is something that we reject and which increases our worries about the situation in Libya," he said.

Following emergency talks in Brussels, Britain, France, Germany and Italy released a statement, calling for a ceasefire in the northern African country.

"The EU is of the firm conviction that there is no military solution to the Libyan crisis and that a protracted conflict will only bring more misery to ordinary people," the ministers said in their joint statement.

"Continuing outside interference is fuelling the crisis," they announced, adding that foreign interference would be a "detriment" to Libya's national interests and of regional stability.

The talks came one day after General Khalifa Haftar and his self-styled Libyan National Army (LNA) captured the strategic coastal town of Sirte.

On Sunday, Turkish President Recep Tayyip Erdogan said Ankara had begun deploying its soldiers to Libya to support the UN-recognized Government of National Accord (GNA).

US President Donald Trump had criticized the Turkish president at the weekend, telling him not to interfere in Libya's conflict.

Libya has since been divided between GNA forces ruling in Tripoli and Haftar's LNA forces dominating the east.

"The over-riding urgency is to stop the fighting in and around Tripoli,'' Borrell said.

"Any escalation and also any outside interference will only make the conflict more protracted, bring more misery to ordinary people in Libya, exacerbate divisions in the country and increase the risk of its partition.''

Haftar's eastern-based forces are supported by the United Arab Emirates and Egypt, as well as France and Russia.

Tuesday's talks on Libya were followed by a meeting on Iran between Britain, France and Germany,  shortly after the death of General Qassem Soleimani.

Turkey and Russia: TurkStream pipeline not a fix for bilateral woes

The Russian and Turkish presidents, Vladimir Putin and Recep Tayyip Erdogan, are set to open the TurkStream pipeline with much fanfare, but other sticky issues show ties are not as strong as they may want them to appear. (07.01.2020)

Armenian PM marches through capital, warns of 'coup' 44m ago

Man charged with passing Bundestag details to Russia 2h ago