The European Union and Ukraine have agreed to delay the implementation of their free-trade pact until the end of next year. The move is a concession to Russia, which had complained its industry would be hurt by the deal. 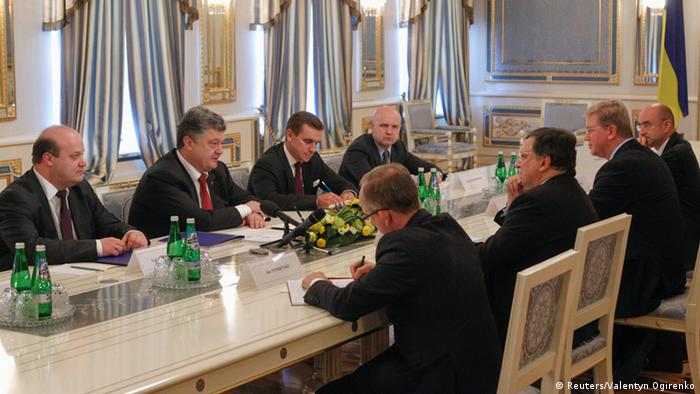 European leaders said late Friday that they would allow Ukraine to delay putting a landmark trade deal into effect, after Moscow threatened to block Ukrainian goods to Russia.

The EU said it would allow Ukraine to maintain its current tariffs until early 2016, but it would still have to undertake major economic and political reforms required by the agreement.

Postponing the deal helps address one of the issues at the heart of the crisis. Russia had threatened to slap import tariffs on Ukrainian goods from November 1, arguing that the pact would squeeze it out and provide a route for EU goods to flood into Russia.

The delay provides "breathing space to discuss whatever problem may arise, and then it will be up to the three parties concerned to see what they do after January 1, 2016," EU Trade Commissioner Karel De Gucht told a news conference. "I hope by then we come to a solution," he added, after talks in Brussels with Russian Economy Minister Alexei Ulyukayev and Ukrainian Foreign Minister Pavlo Klimkin.

Earlier in the day, Ukrainian President Petro Poroshenko announced that legislators would ratify the landmark deal with Europe next Tuesday pivoting his country firmly toward the West over half a year after its pro-Russian leader was ousted from power following months of protests.

The EU and United States both imposed new sanctions against Moscow on Friday over what they said was its military backing for separatist rebels in the east of Ukraine.

A ceasefire agreement, signed last week in the Belarusian capital of Minsk, has been riddled with violations from the start, though it has helped reduce casualties and brought dozens of prisoners on each side home.

Near midnight on Friday, 33 Russian trucks crossed into Ukraine carrying humanitarian aid for the hard-hit east, Russian customs official Rayan Farkushin was quoted as saying by the Interfax and RIA Novosti news agencies.

A previous Russian humanitarian convoy caused controversy when it entered Ukraine unilaterally in August; Ukrainian officials worried it was cover for bringing in aid to the rebels or spiriting away industrial equipment seized by the rebels.

But the Minsk agreement provided for two additional convoys. Russian officials said the aid would include food, water purifiers and electrical generators.

US announces fresh sanctions against Russia

The United States has announced more sanctions against Russia targeting the country's largest bank as well as oil and defense industries. The new measures come hours after the EU imposed new sanctions against Moscow. (12.09.2014)